Grab your surfboard and catch a wave on over to my son’s totally tubular beach surfing party!

I’m super stoked to share all the epic party details with you and inspire you to throw your own surfing party!

My son begged me for a themed birthday party, and since he is almost to the age where he’ll be too old for all my themed party fun, I happily indulged.

He wanted to have a pool party, so I came up with the beach and surfing party theme.

It worked perfectly with the swimming! 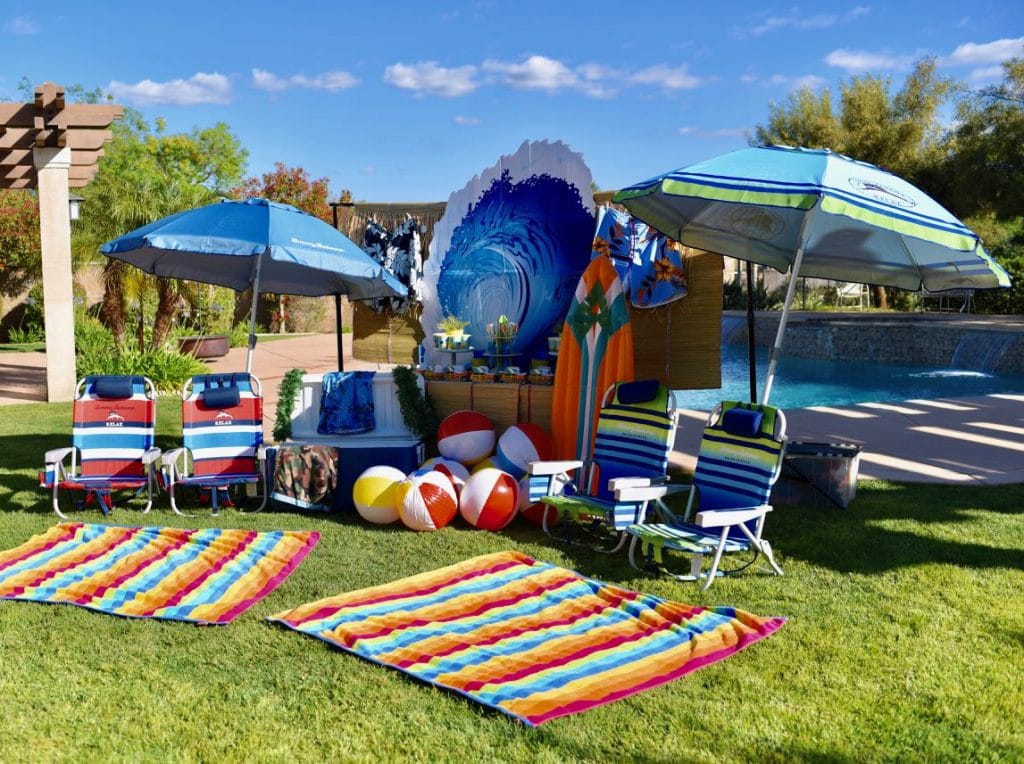 A giant wave stand-up was the perfect backdrop for our surfer party!

On either side of the wave I hung some bamboo mats up, along with some of my hubby’s board shorts that matched the party colors perfectly. 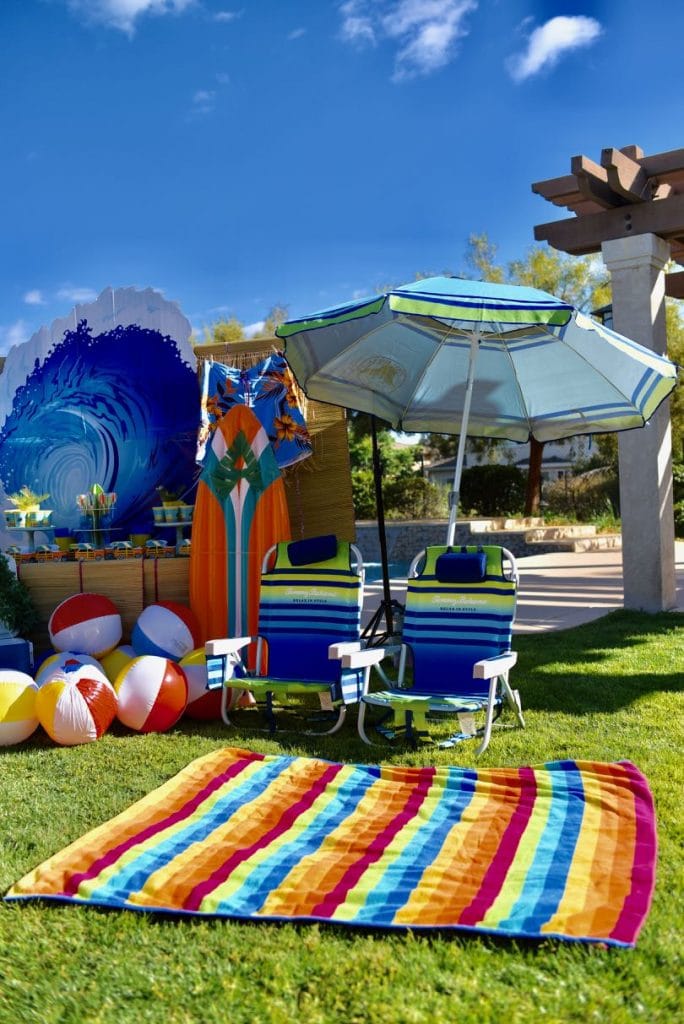 A giant beach umbrella, matching beach chairs, and big beach towels were placed on both sides of the party table to add the the beach and surfing theme.

We blew up a bunch of beach balls to go in front of the table as the boys arrived.

When they started swimming, we threw all the balls in the pool for them to play with. 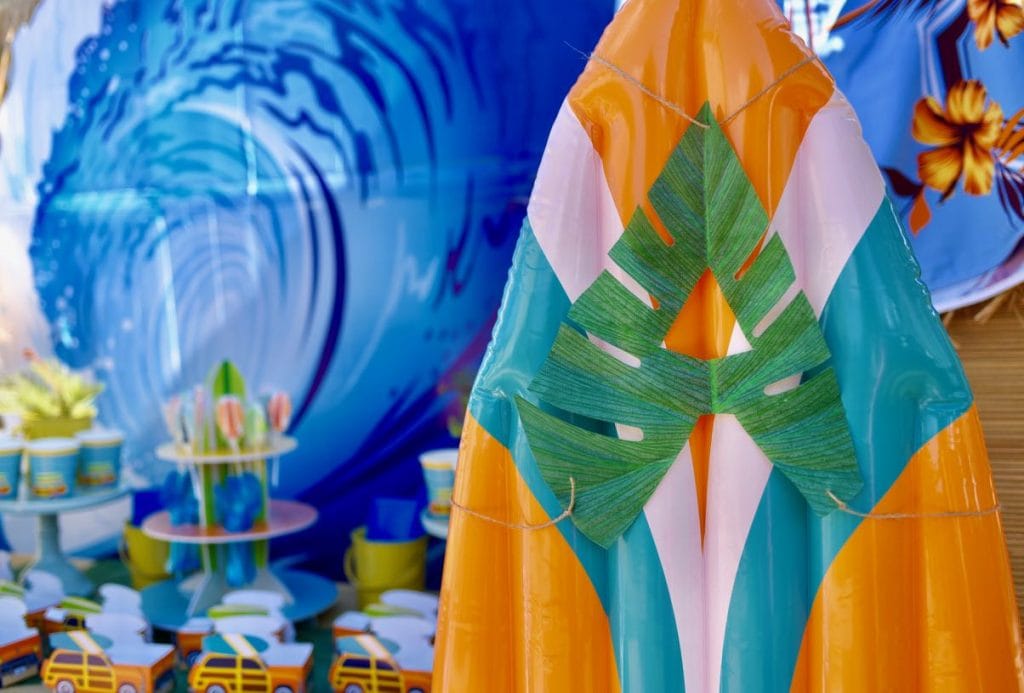 The most popular pool toy was the giant inflatable surf board!

It started out as a party decoration on the side of the table, but quickly ended up in the pool with the boys.

I was surprised that it didn’t pop with a bunch of teen boys playing keep away with it in the water! 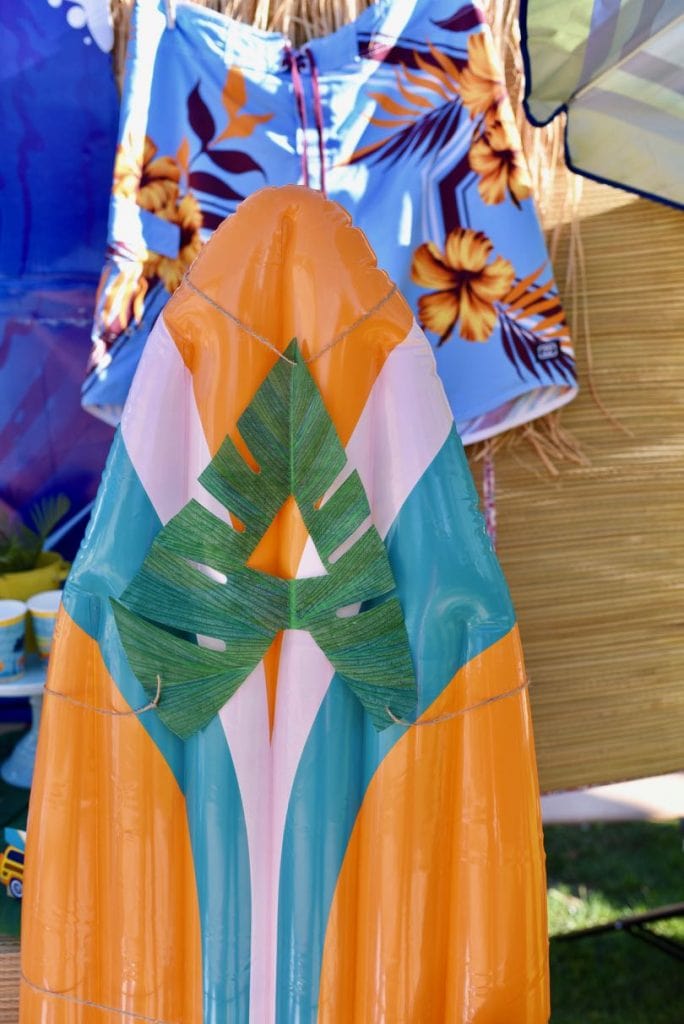 You might have wondered why we hung a tropical leaf on the surf board?

My son’s name starts with an “A,” so my husband cut the leaf to look like an “A.”

Nice and subtle, but I thought it was a sweet touch for my sweet boy. 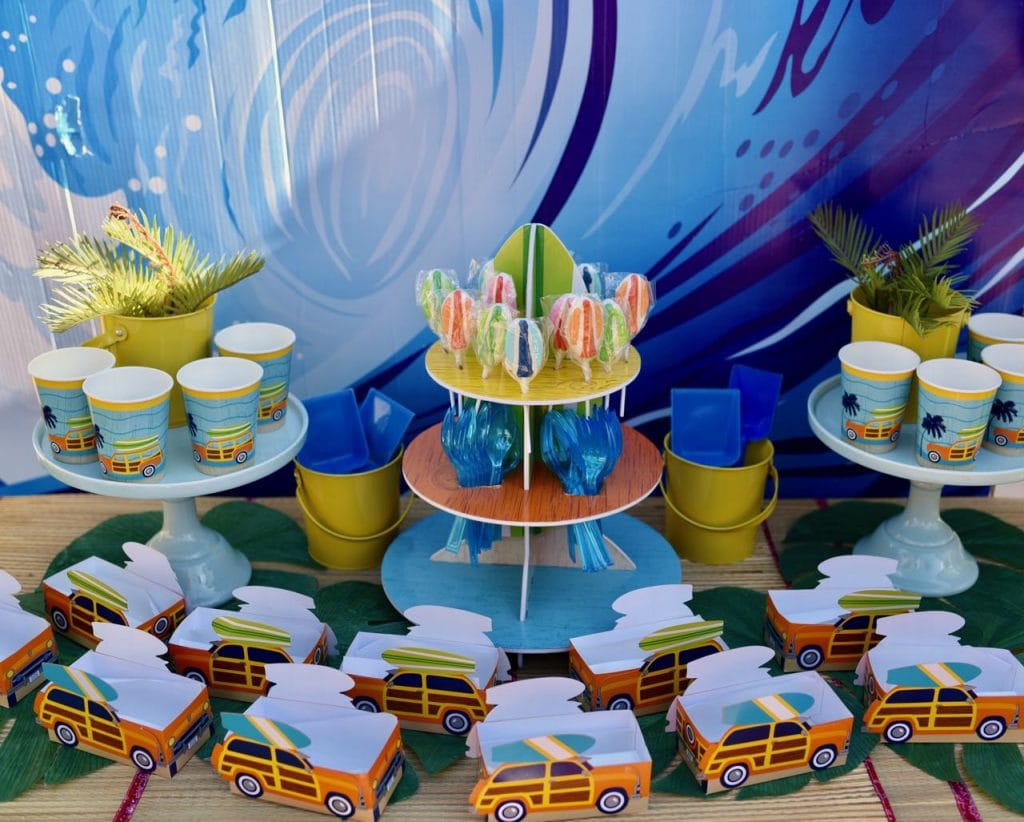 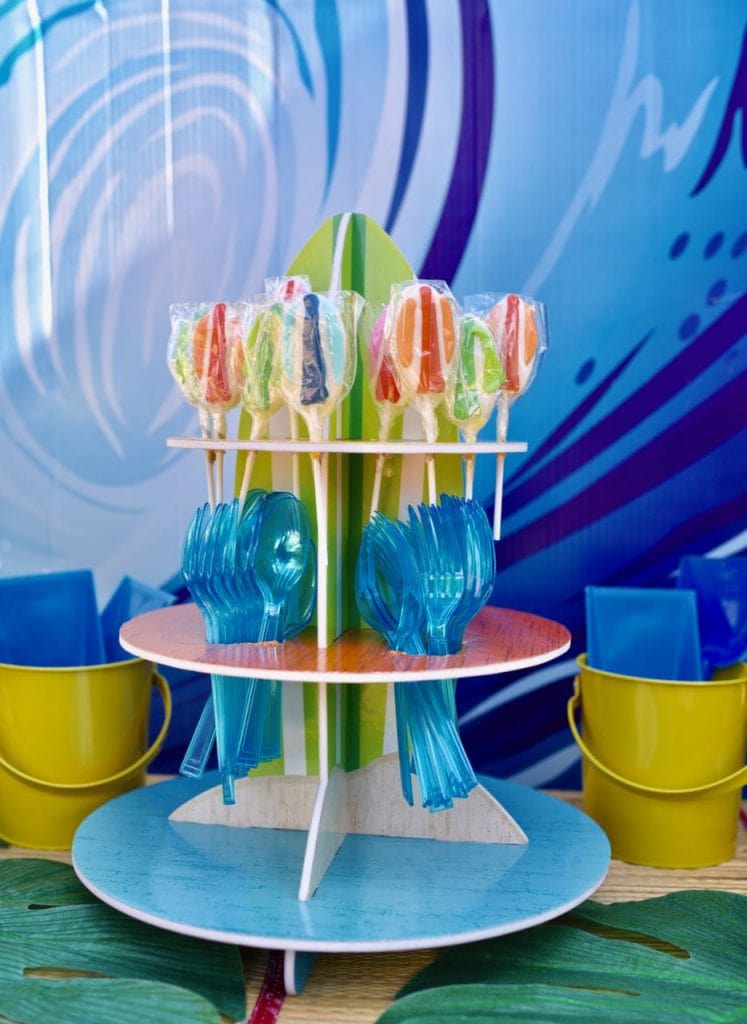 At the center of the table was a surf board cupcake stand from Oriental Trading.

My son isn’t a cake fan, so we poked holes in the top layer and placed some cool surfboard suckers inside. 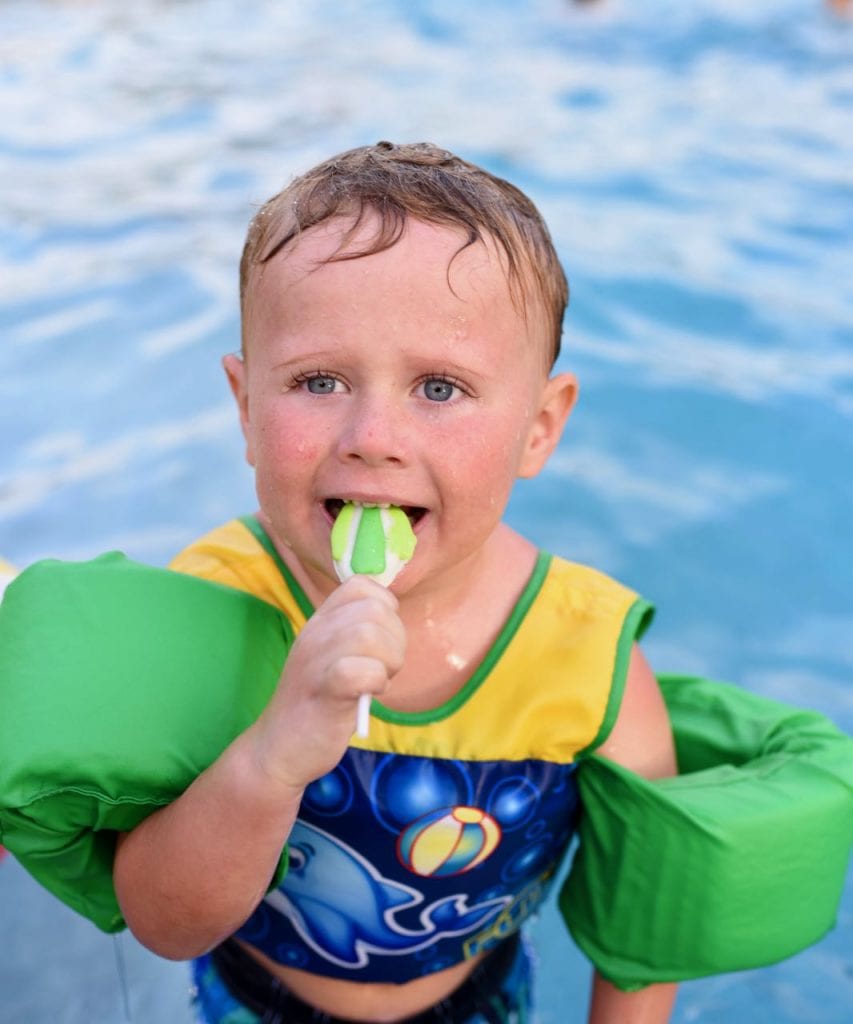 The big and little boys were fans of the surfboard suckers!

The second layer was perfect for holding forks and spoons.

We just made a couple big holes and stuck the blue utensils inside.

On either side of the big surfboard were two blue cake stands with yellow buckets and mini palms I bought from Pottery Barn a few years ago. 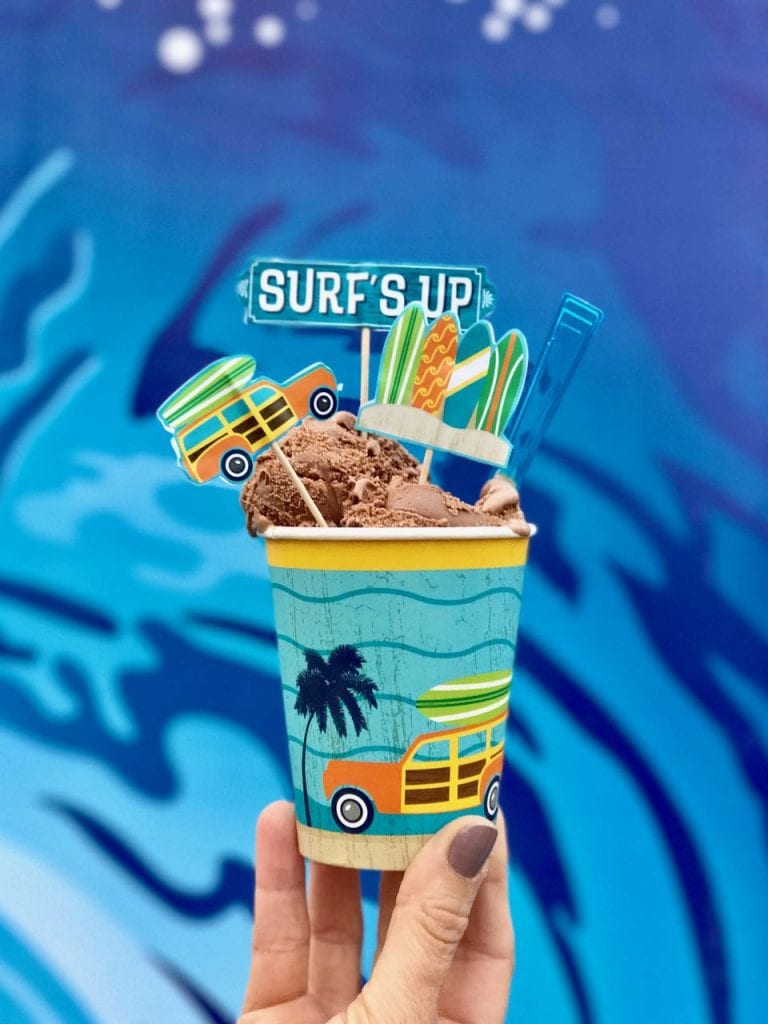 Cute woody paper cups with surfboards on them were used to hold the ice cream into later in the party.

We topped each ice cream with some cute surfing picks.

Love the extra pop of color these added! 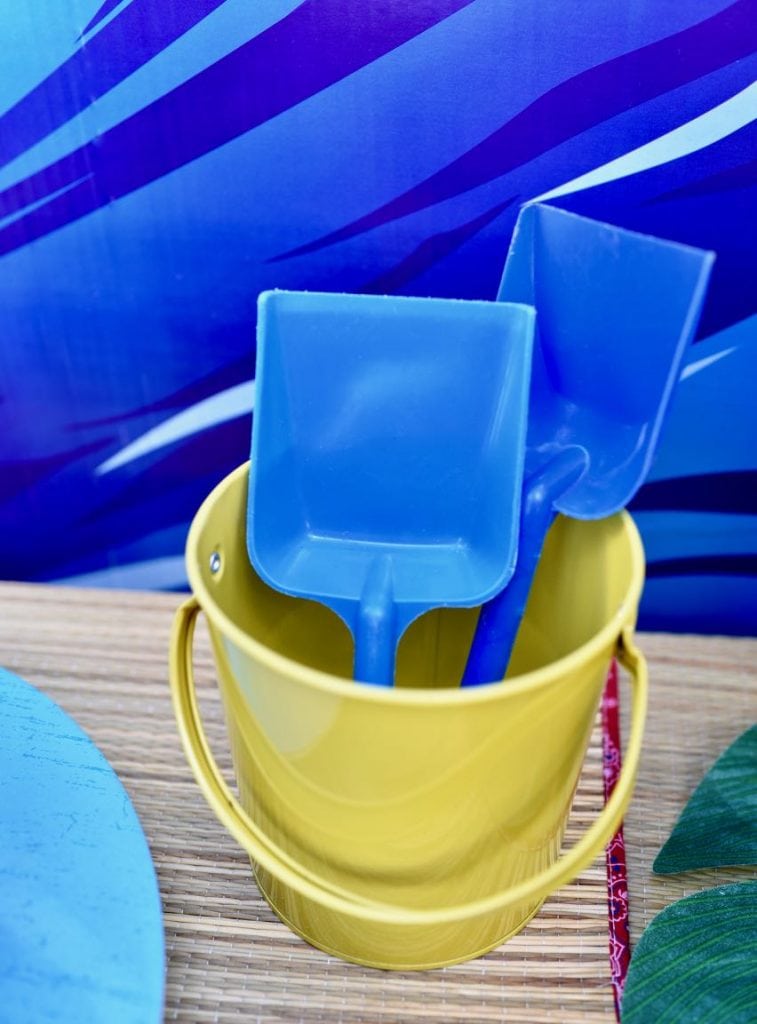 A few more yellow pails were placed on the table with sand shovels inside. 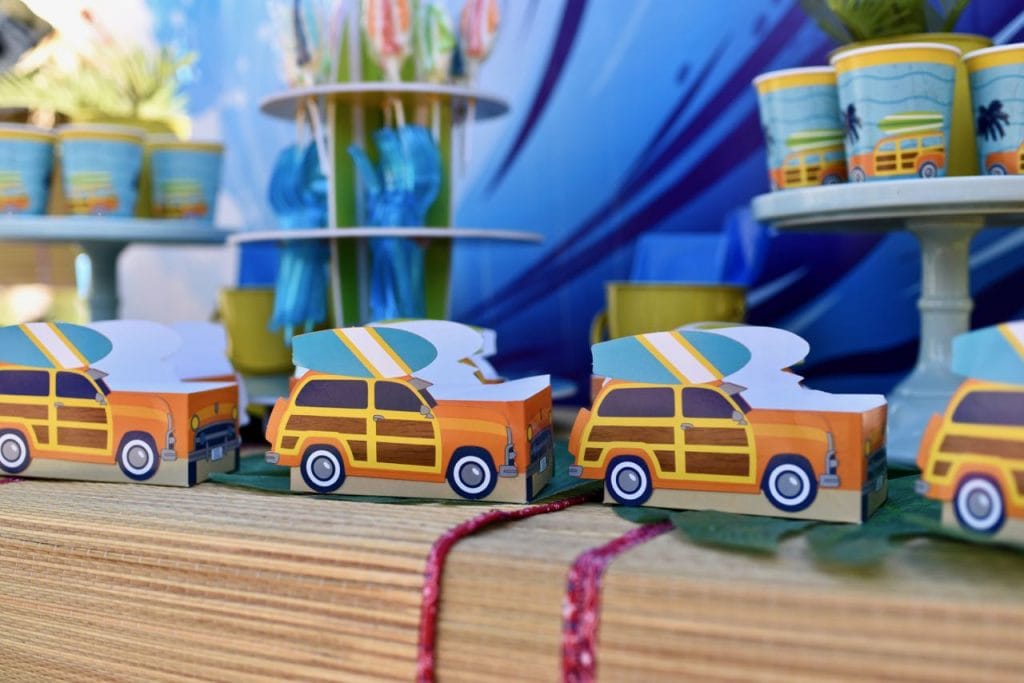 One of my favorite parts of the party were the adorable surf’s up favor boxes.

These are seriously cute! 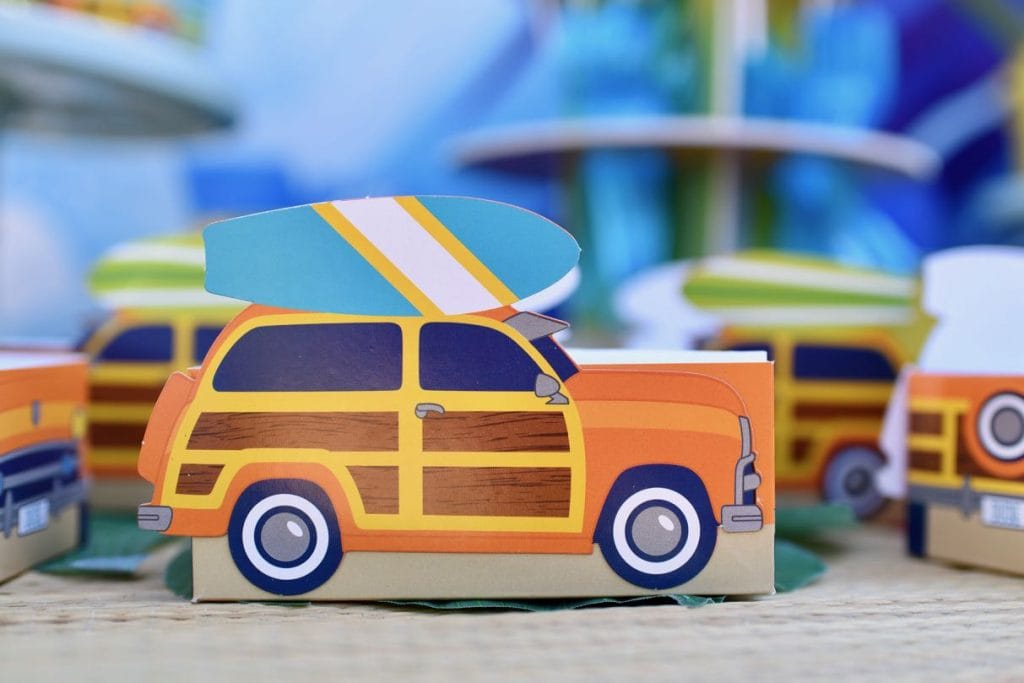 There were two rows of woody party favor boxes driving both ways across the party table.

They’re empty because we used these cars as pizza holders for the giant pizza we bought for the boys that was cut into squares. 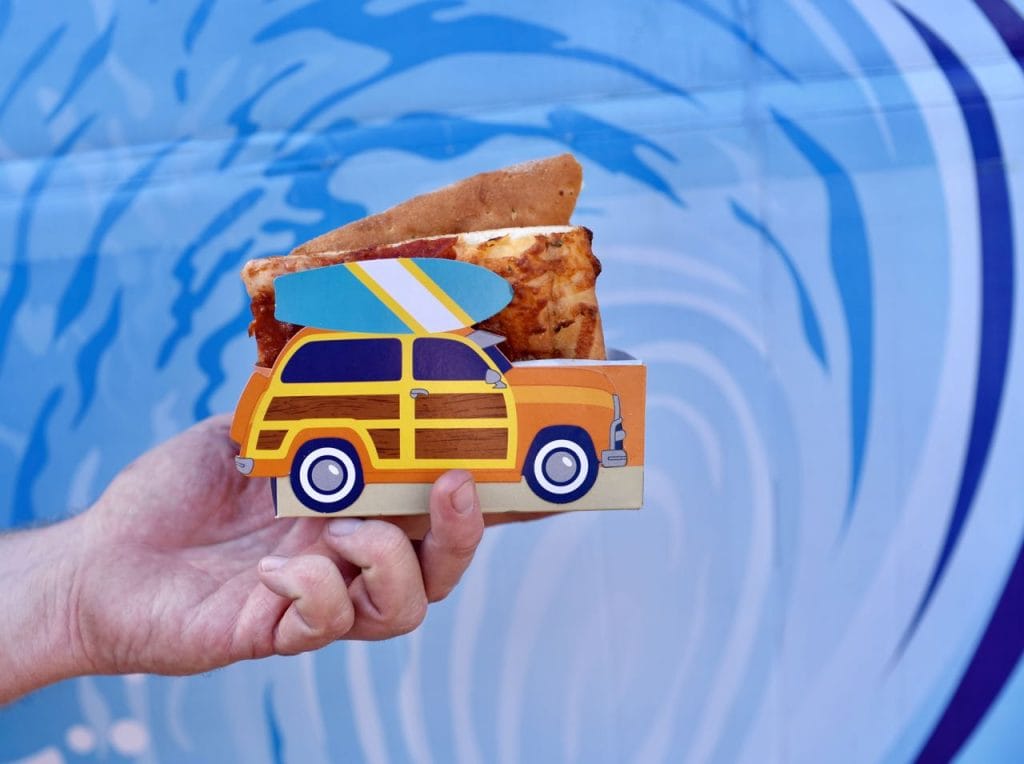 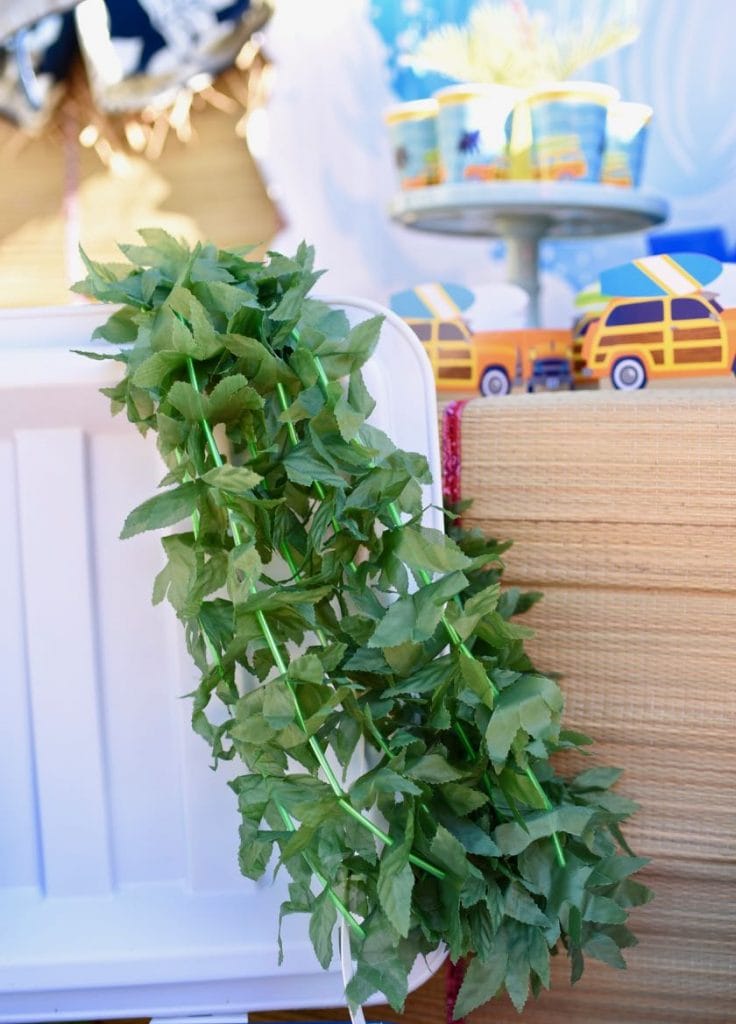 I filled a cooler with ice and soda cans for the boys, then hung these green leis across the top that were left over from our Moana party. 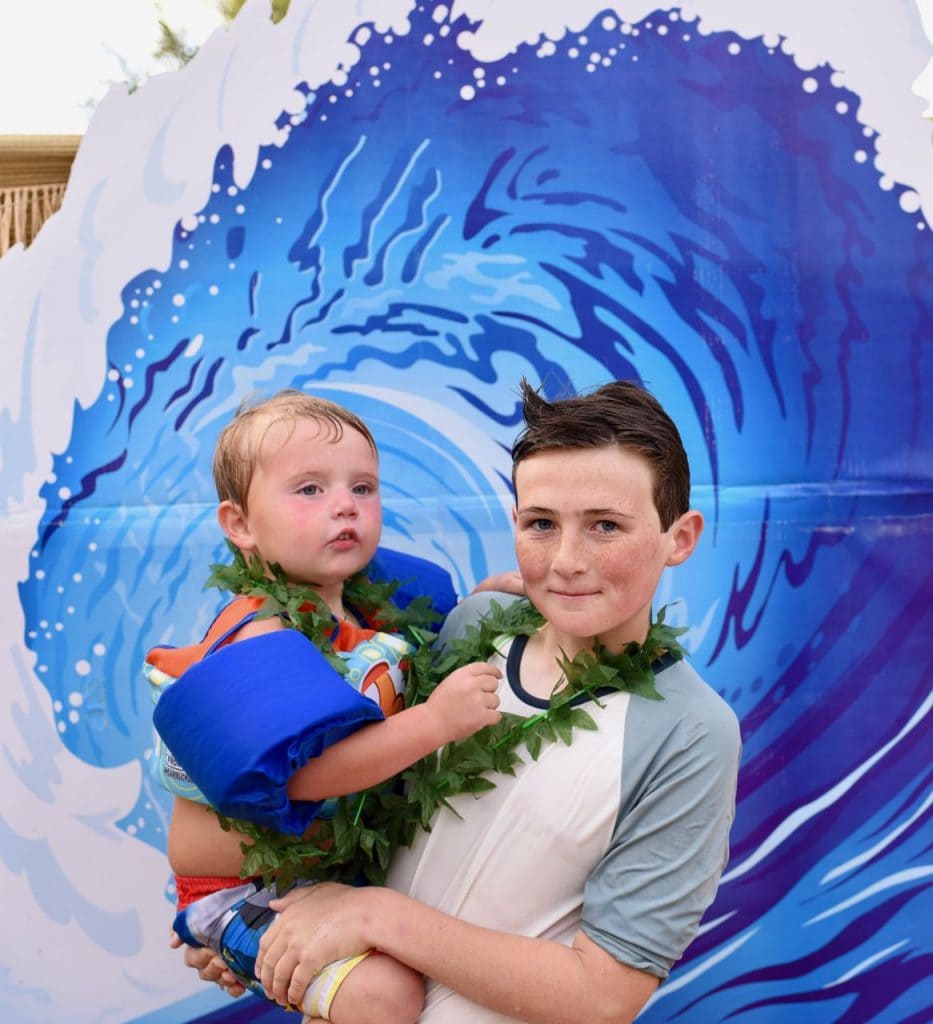 They made the perfect accessories for the wave photo booth! 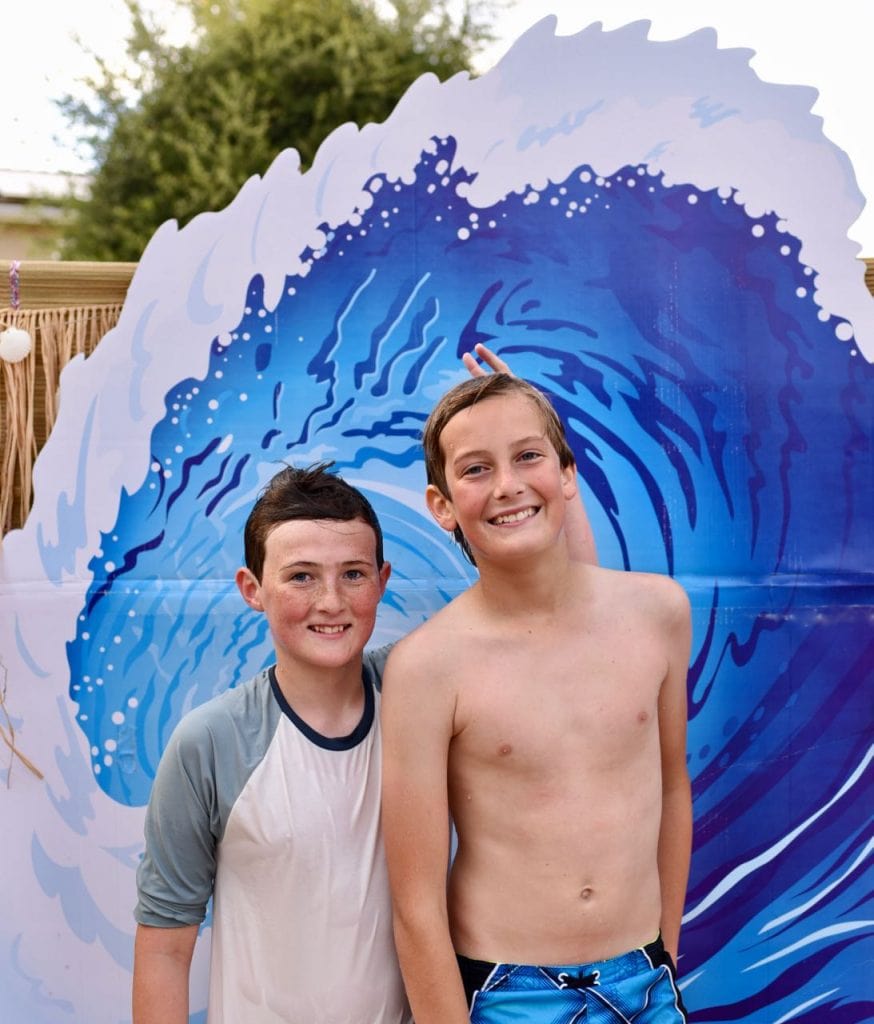 I’m all about my party supplies doing double duty, so halfway through the party we turned the wave around and it served as a photo booth backdrop for the boys.

The boys ate and swam for the entire party, no party games needed.

They kept themselves entertained in the water.

A surfing party was the perfect way to celebrate my son and to welcome summer.