Thank you Cost Plus World Market for sponsoring out Chinese New Year Party.  All ideas and opinions are always 100% my own.

Two of my kids have been in a Mandarin Chinese Immersion program at school since kindergarten, which means that they learn Chinese half the day at school and English the other half.  It has been so much fun watching them learn to read and write Chinese characters, as well as learn more about the Chinese culture and all of their celebrations.

Chinese New Year starts on February 16th this year and marks the beginning of the Year of the Dog.  Chinese New Year is based on the legend of a mystical beast called the Nian, who would eat the villagers at the beginning of every new year.  One new year a man tried to scare the beast by putting red papers up and lighting firecrackers while the rest of the villagers hid.

When the villagers came back from hiding the next day, their city wasn’t destroyed.  They believed that their city was saved because Nian was scared of the color red and loud noises, so every new year after that they would hang red lanterns and scrolls and light firecrackers to scare the beast away. 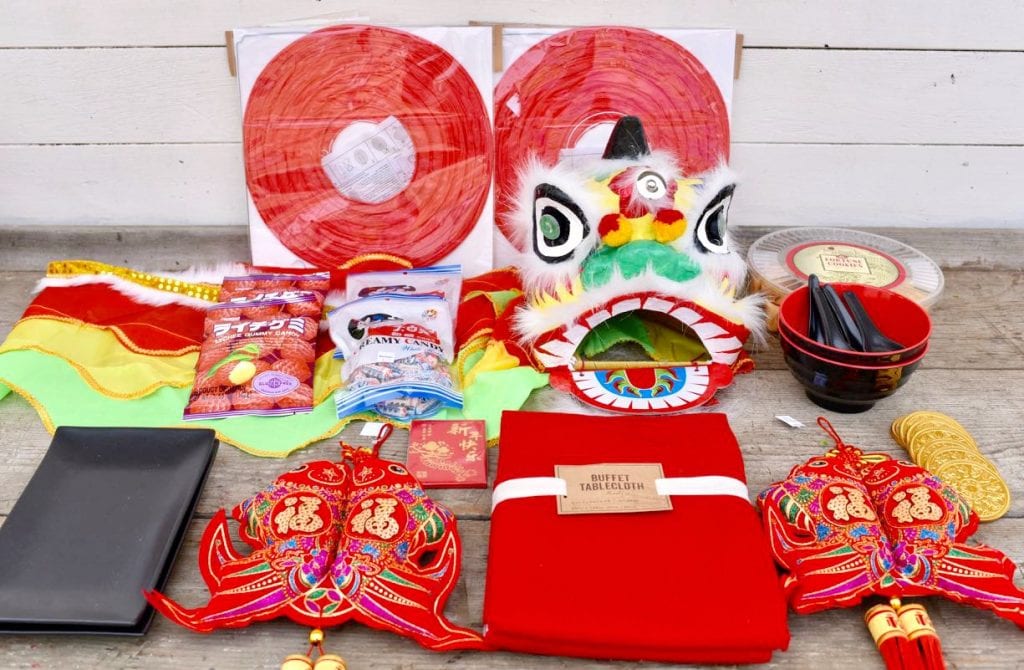 The kids were SO excited when they came home and found all the amazing Chinese New Year party decor that I found at Cost Plus World Market!  My daughter started reading all of the Mandarin characters on the packaging and could hardly wait until the party! 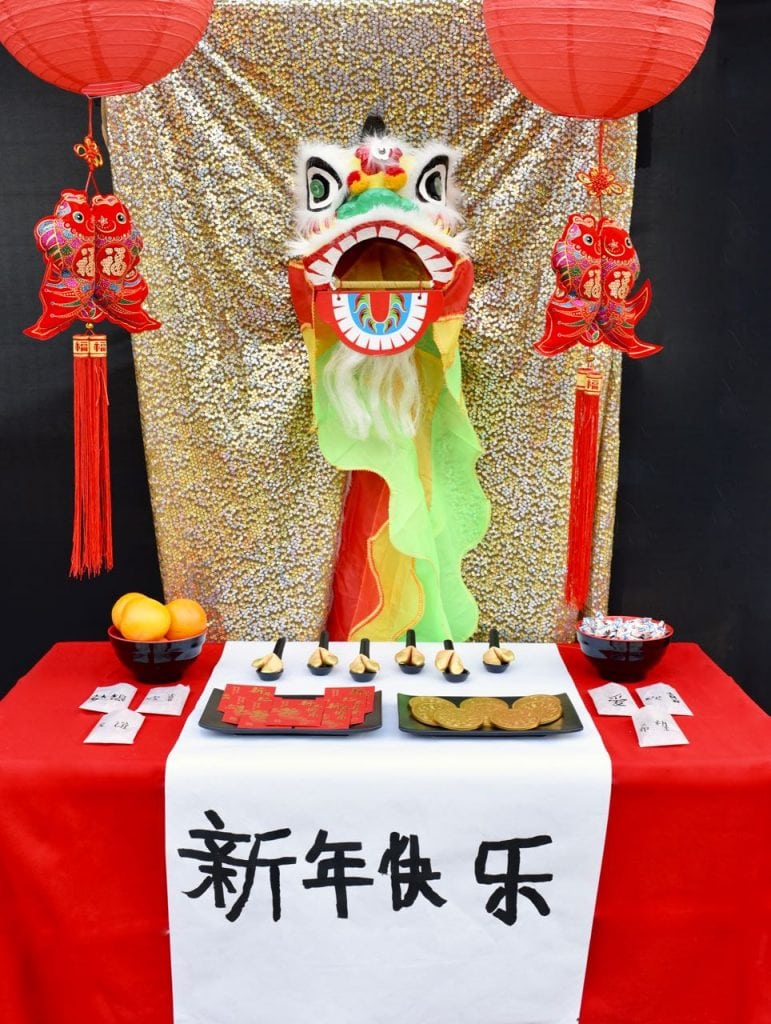 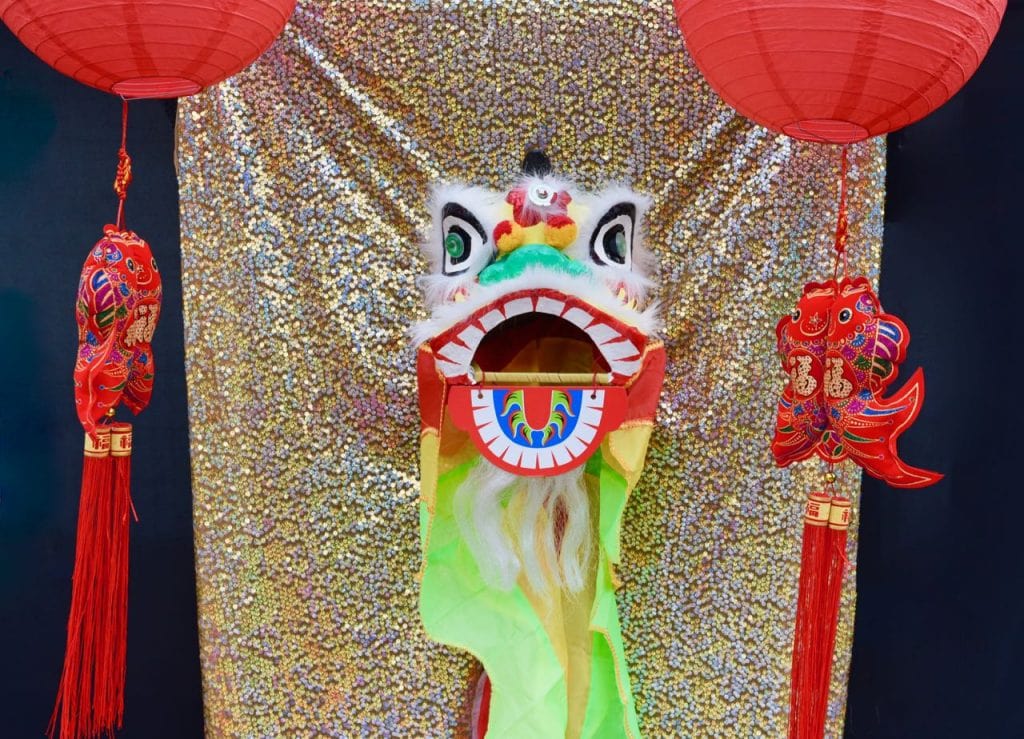 I hung up some black fabric behind our party table, then hung some beautiful gold sequined fabric down the middle of the black backdrop.  The dragon head was hung in the middle of the gold fabric, and I just love tall the bright colors and details on it!  It has a beautiful 3 foot fabric “body” on it that is so fun and festive. 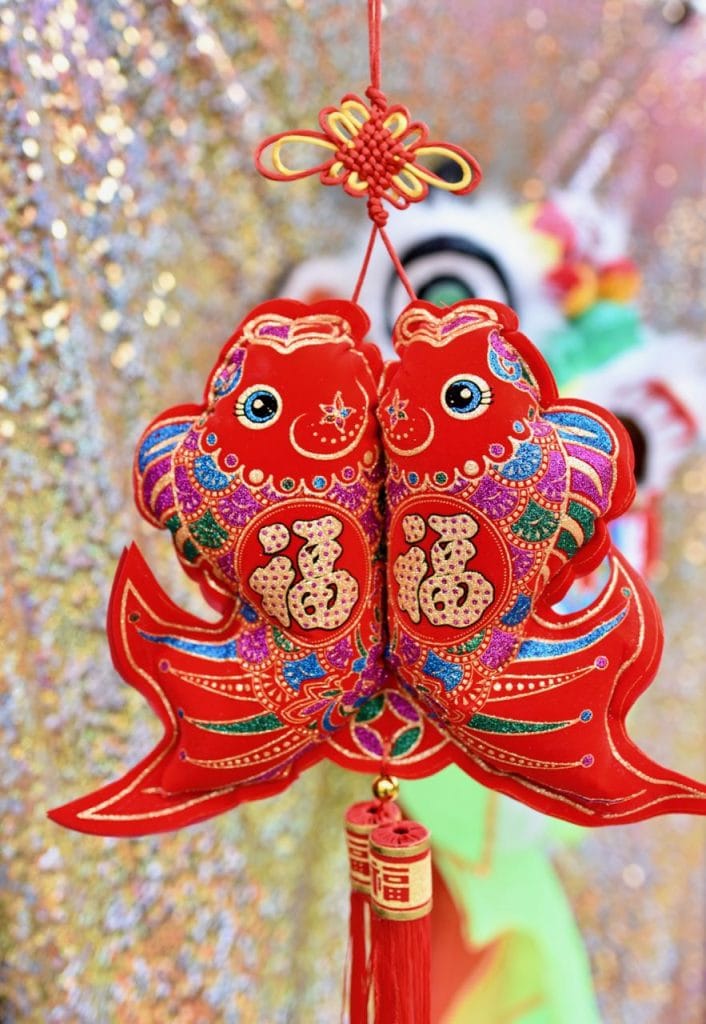 A large red lantern was hung on each side of the dragon.  I tied some hanging red fish to the base of each lantern with some fishing line.  There are so many gorgeous details on the fish that really added to our Chinese New Year party. 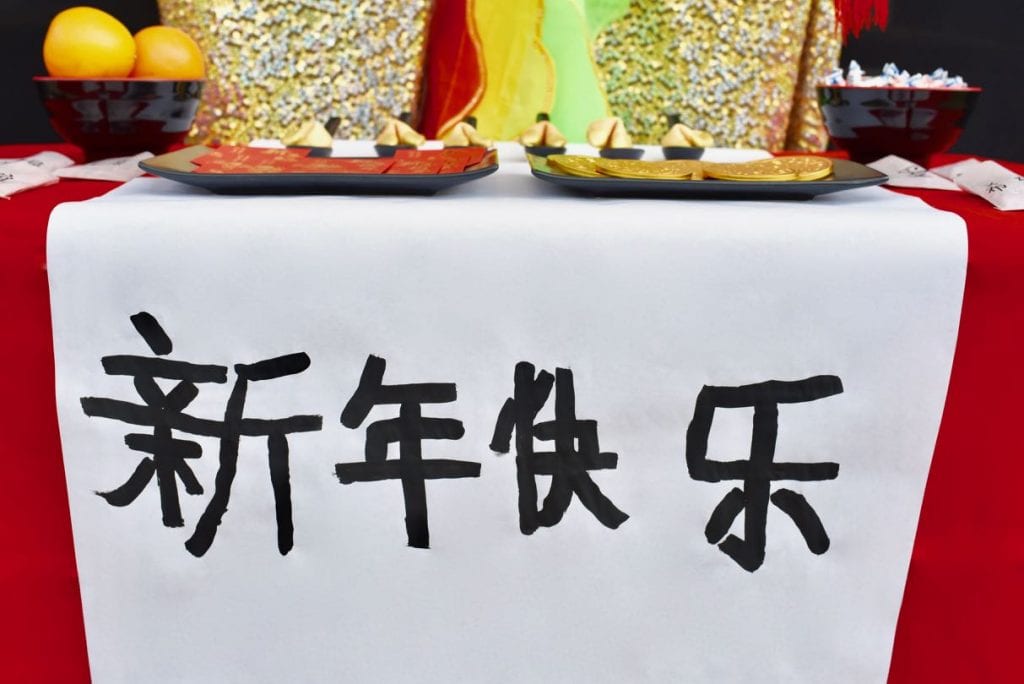 Because my daughter can read and write in Mandarin, I gave her some white banner paper, black paint, and a paintbrush, and had her paint “Happy New Year” in Chinese characters.  I then ran the white banner down the middle of the table over a red tablecloth. 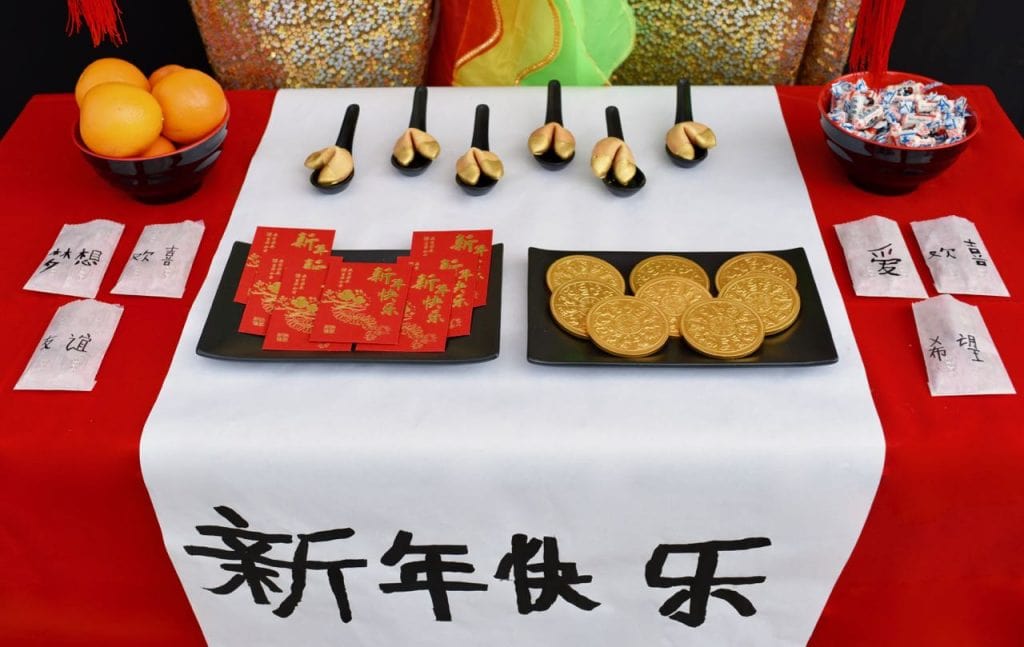 I love the contrast between the red tablecloth, the bright paper banner, and the black characters. 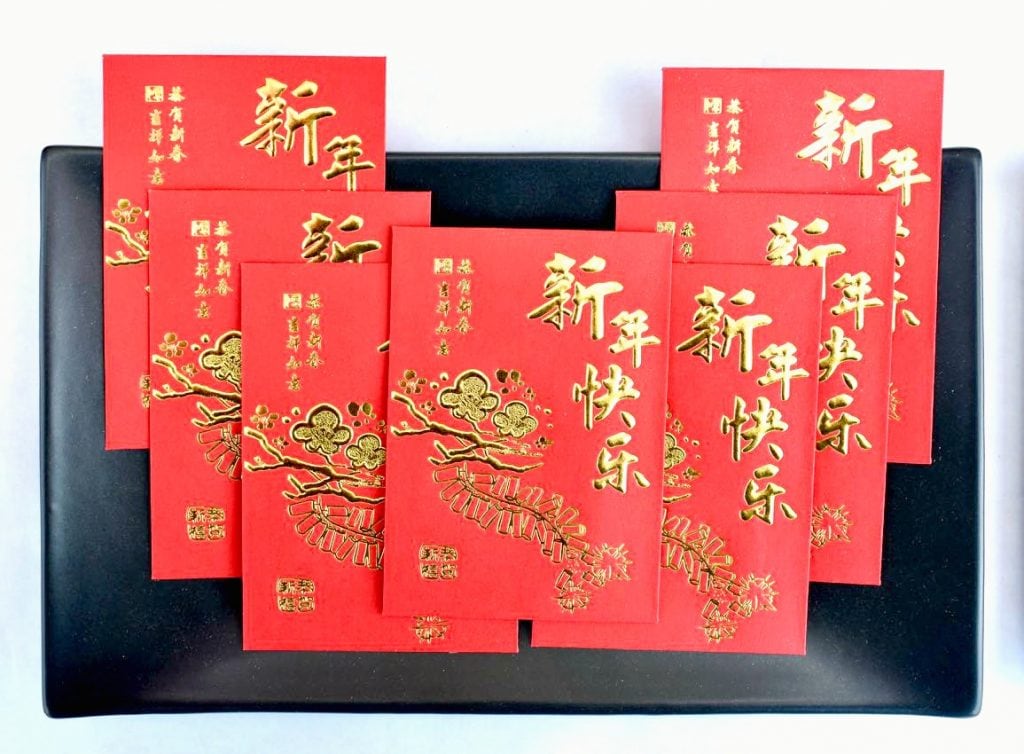 I filled some traditional red envelopes that are filled with money each year and given to the children during Chinese New Year.  These were stacked on a black rectangular plate. 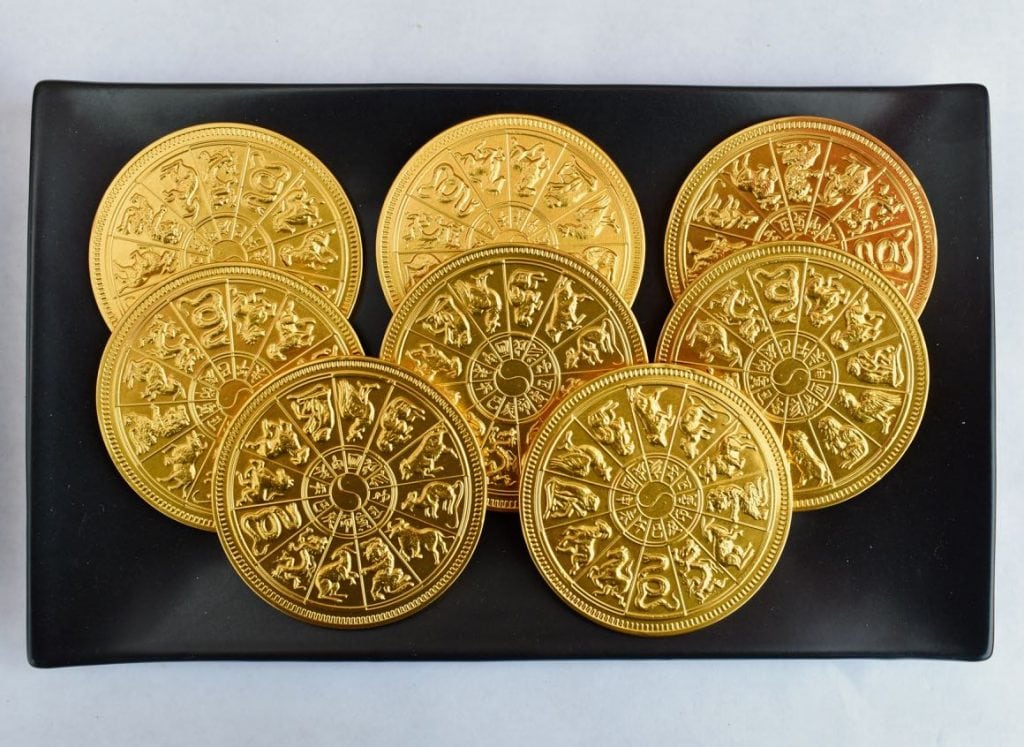 Large Chinese zodiac chocolate medallions were stacked on a neighboring black plate, and were the hit of the party with the kids! 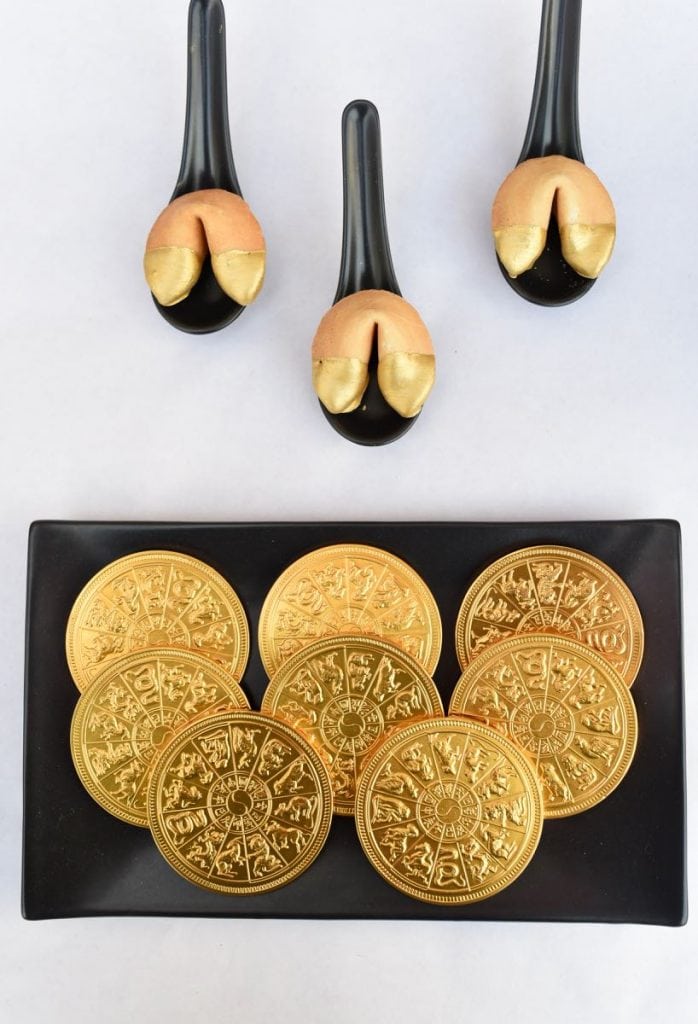 These zodiac medallions are pretty large and have SO much detail on the shiny gold packaging.  These are definitely a must for your Chinese New Year party! 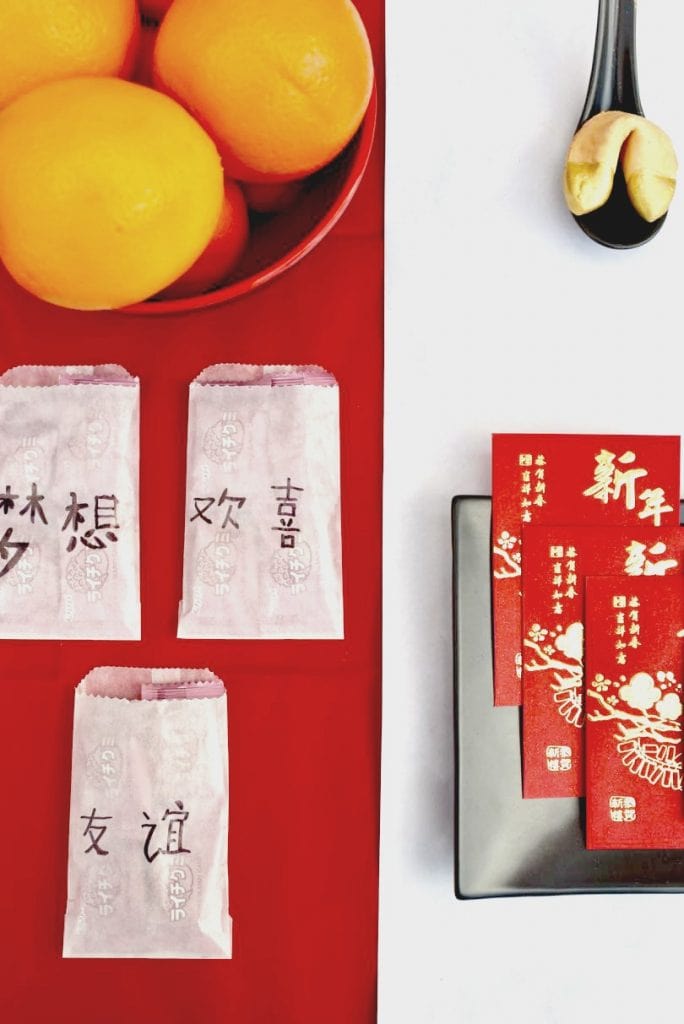 Black and red bowls were placed on each side of the table.  One bowl was filled with oranges, which are a symbol of good luck. 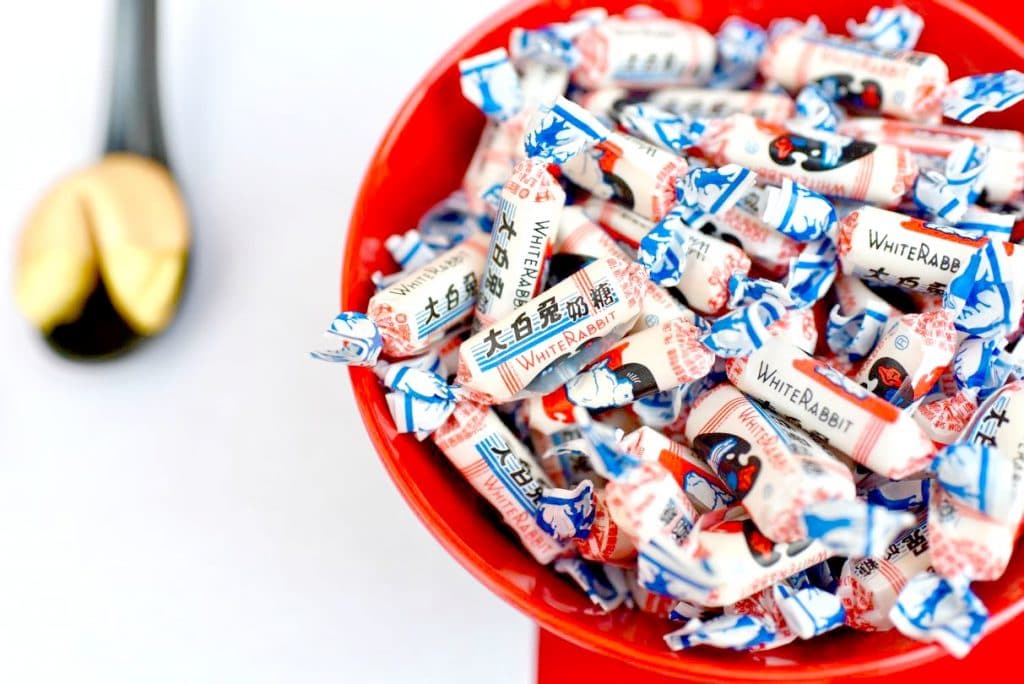 White Rabbit creamy candy filled the other bowl.  These were a hit too because they are wrapped twice- once in the colorful packaging you see, and then wrapped again in an edible rice paper.  My kids LOVED eating these, along with the edible rice paper! 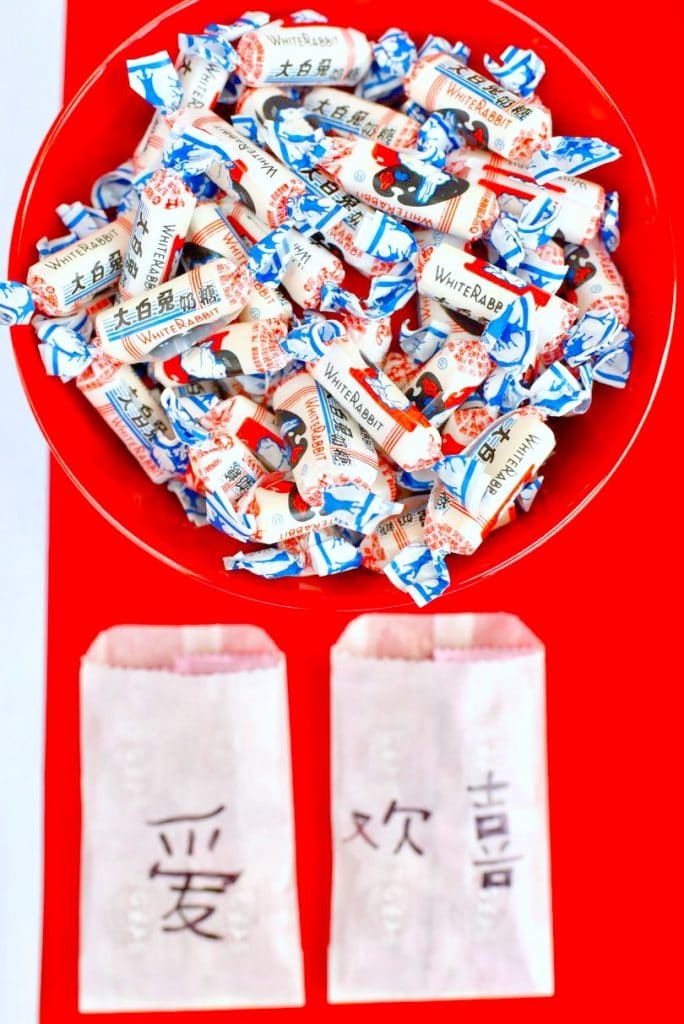 My daughter wrote some Chinese characters on the front of some glassine envelopes, then we filled each envelope with fruity lychee candy from China.  Each envelope had words written on the front that were relevant to the Chinese New Year like “happiness,” “hope,” “love,” “friendship,” and “dream.” 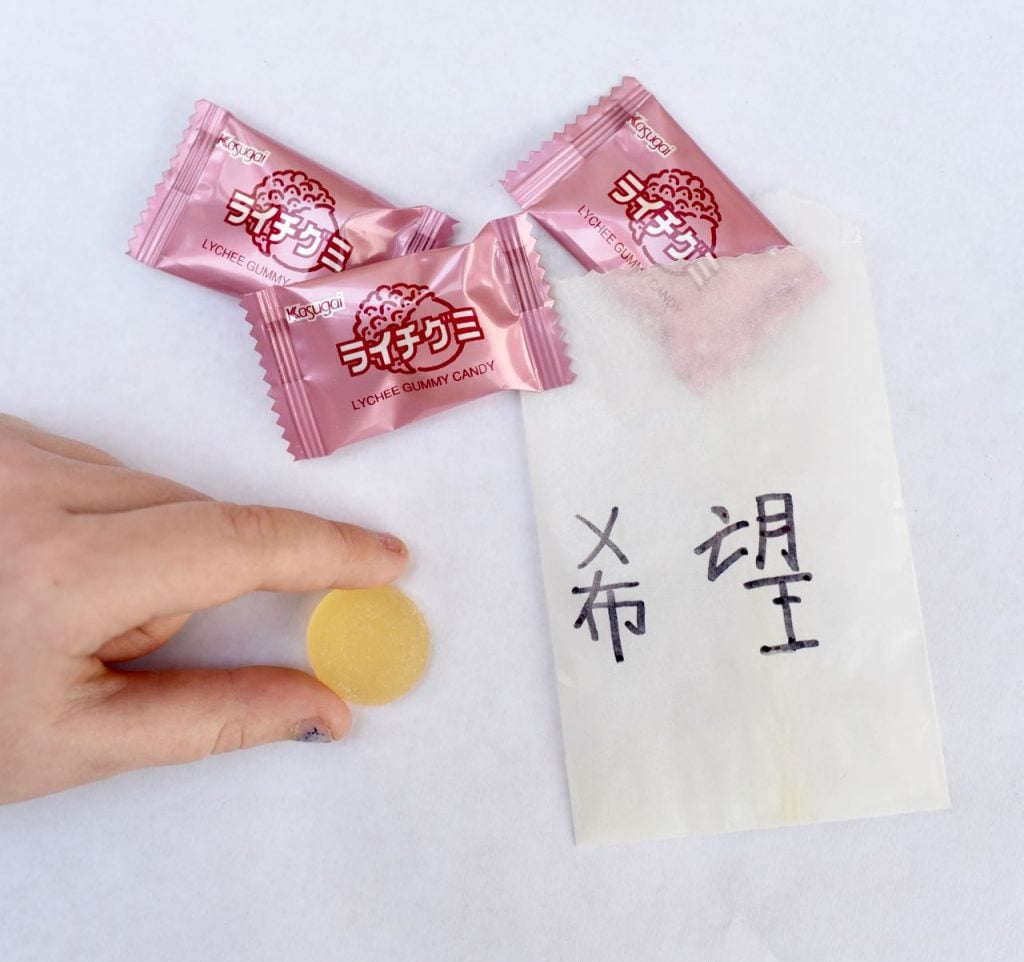 The lychee candy was soooo delicious!  I’ve never eaten a lychee before, but the gummy candy was so fruity and flavorful. 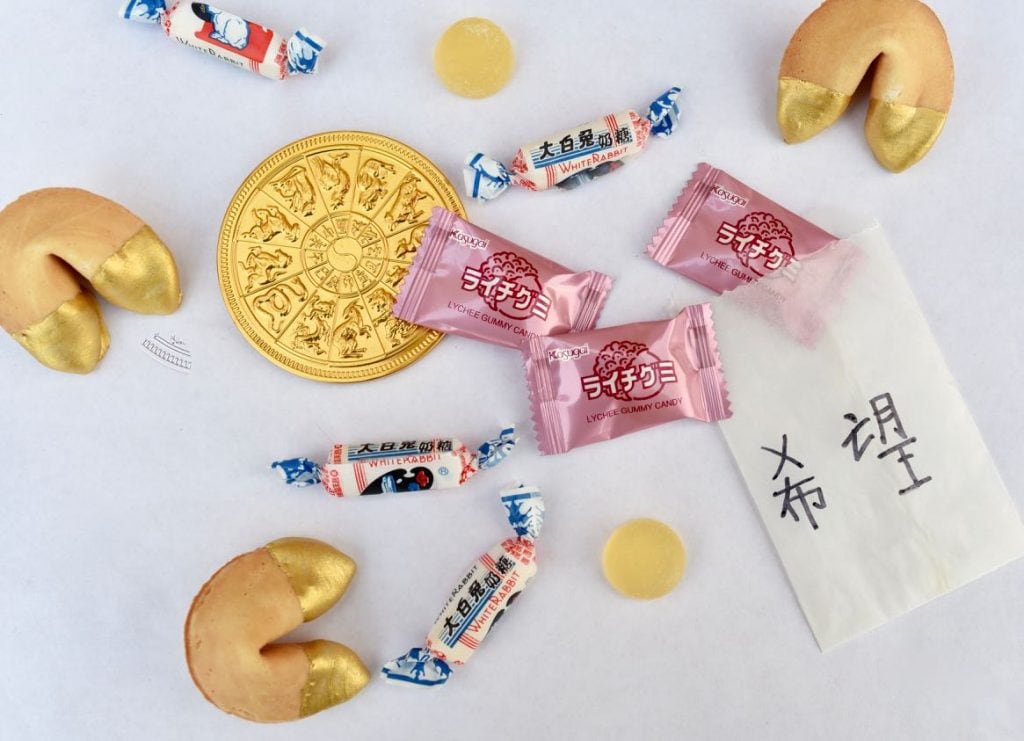 Each large gummy was individually packaged too, which makes them a great treat choice for a Chinese New Year party.  My picky kids all loved them! 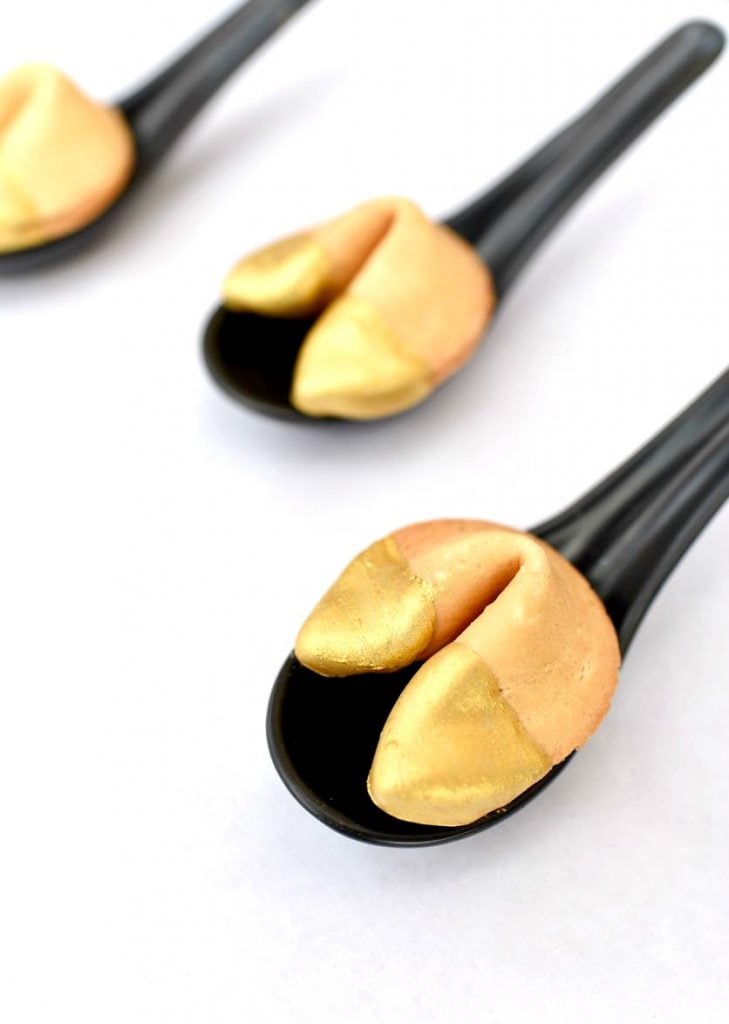 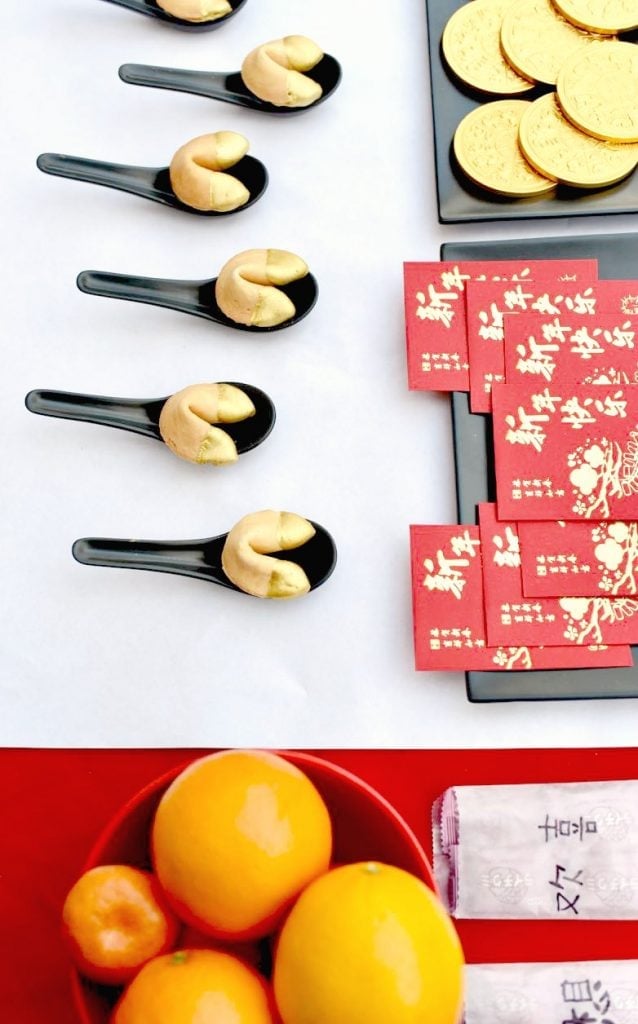 We had such an amazing time at our Chinese New Year party.  It’s been such a wonderful experience having my young kids immerse themselves in the Chinese culture by learning all about their language, traditions, celebrations, and history.

I hope I’ve given you some ideas to celebrate Chinese New Year with your own family!  It’s a great way to have fun with your family while learning about and respecting another culture.