This shop is part of a social shopper marketing insight campaign withPollinate Media Group™ and Kleenex but all my opinions are my own. #pmedia #KleenexTarget  https://cmp.ly/3/8vNxcO

Although we’re only 9 days into December, almost our whole family (my husband, four kids, and I) have already been sick this holiday season.  So far we’ve had colds, really bad coughs, the flu, the stomach flu, and sore throats.  Ugh.  When my family gets sick, I make them relax in their bed or on the couch, have them sleep, and then they can watch a movie.  I give them a box of Kleenex tissues for those runny or stuffed up noses, and then make them a nice, simple warm meal that will make them feel better. 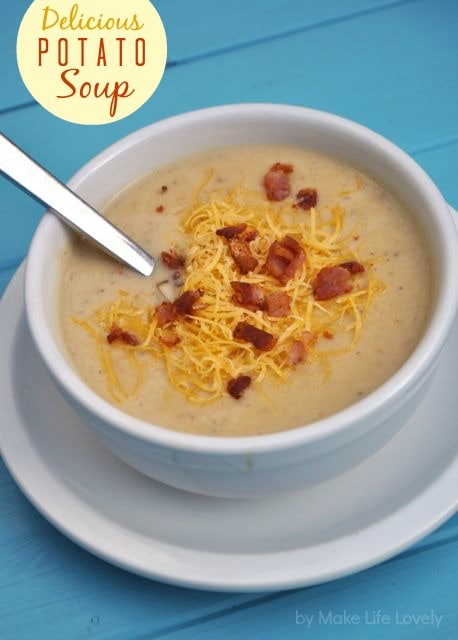 One of my favorite foods to eat when I have a cough or cold is a nice warm bowl of potato soup.  It warms me up from the inside out, and makes me feel all warm and cozy inside 😉  Chicken noodle is great for the job, too, but sometimes you need to mix things up a bit! 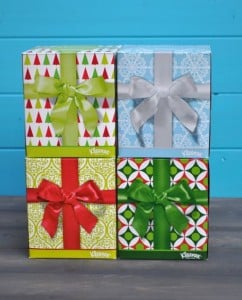 I recently bought a four pack of Kleenex boxes while shopping at Target, and fell in love with the cute new holiday boxes they have that look like they are wrapped like presents.  Hey, if you have to be sick,  you might as well do it in style, right?  There’s also a $1 coupon that you can print HERE and use when you buy a 4-pack or larger of Kleenexes, which make these a great deal.

This potato soup recipe, like any recipe, is totally adaptable to your taste.  I use bacon in this recipe, but you can also substitute turkey bacon, or simply omit the bacon.  I used evaporated milk, but if you want to use heavy cream or half and half to make the coup richer, then go for it!  Like your soup cheesy?  Add cheese at the end!  (My son won’t go near anything with cheese in it, so I leave it out).  I hope you enjoy this recipe as much as I do! 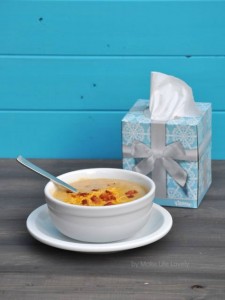 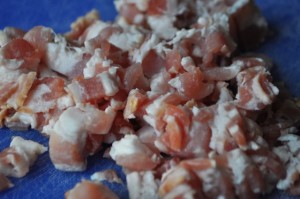 1.  Cook the chopped pieces of bacon right in the soup pot until they are nice and crisp.  Remove the bacon from the pan, but keep the bacon grease in the pan.  Add the diced onion and minced garlic to the pot and cook over medium hear, stirring occasionally, until the onions are translucent.
2.  Add the 2 Tbsp. of butter, and let melt.  Add the chopped potatoes to the pot, along sprinkle on the 4 Tbsp. of flour, along with some salt and pepper.  Stir until the potatoes are evenly coated with flour, and cook for a minute or two.
3.  Add the chicken broth, bring to a  boil, and let the mixture simmer for about 15 minutes, or until the potatoes are soft.  Once potatoes are tender, add in the can of evaporated milk and the bacon (leaving some out for garnish for the soup).  Let simmer for about 5 minutes.  After 5 minutes, taste and re-season if necessary. 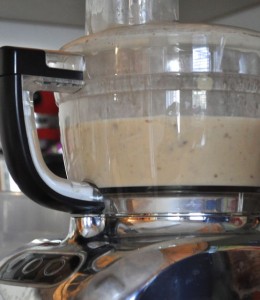 4.  If you like chunky potato soup, then you can leave the soup as is.  I like my soup creamy, with a few little chunks of potato, so I blend about 80% of my soup in the blender or food processor to give it a smooth consistency.  Just be sure to only fill your blender about halfway with soup (work in batches), because the hot soup expands and can pop the lid off and make a huge mess if you fill the blender too full.  Don’t ask how I know this.  Rookie mistake after I was first married and attempted my first batch of potato soup.  But you’re smarter than that and won’t make the same mistake, right? 😉 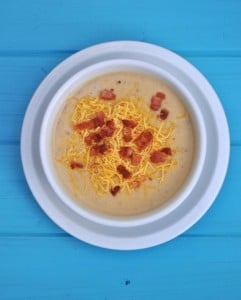 I love to garnish my soup with a little shredded cheese on top, along with some Greek yogurt (tastes just like sour cream on top and I always have it on hand), chives and bacon crumbles.  I also like to serve it with crusty bread and a salad.  Yum! 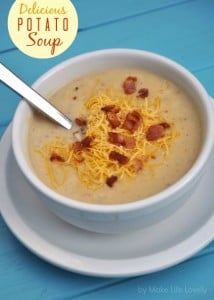 This is the perfect soup for a cold winter day when you have a cold, cough, or sore throat.  It’s a hot, hearty soup that will warm you right up!

Don’t forget to print out your coupon for $1 off a multi pack of Kleenexes at Target. Then you’ll be all ready to brave the colds, coughs, and every other sickness that this time of year is sure to bring!