Falling leaves, shorter days, cooler weather, and pumpkin everything can only mean one thing… football season is here!  Cheering on your favorite college or pro football team is one of the highlights of fall for football fans everywhere, so today I’m sharing how to create a football themed party that will have your scoring with your guests! 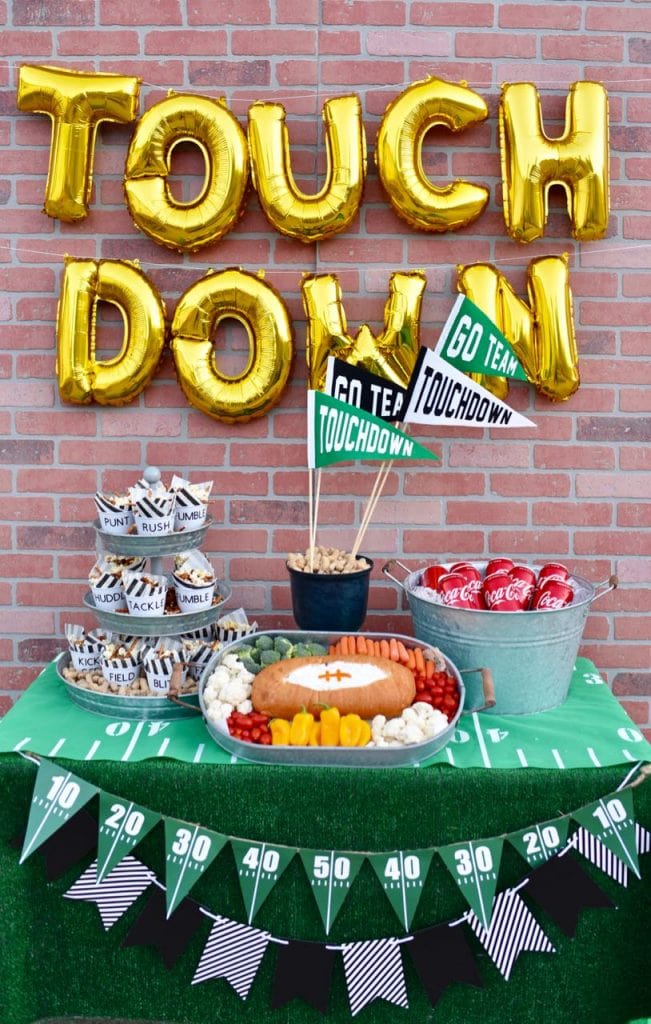 How to Create a Football Themed Party

Behind every good football party are awesome football party decorations.  Our party backdrop was brick, so the gold “Touchdown” letter balloons hanging above the party table really popped (not literally, thank goodness)! 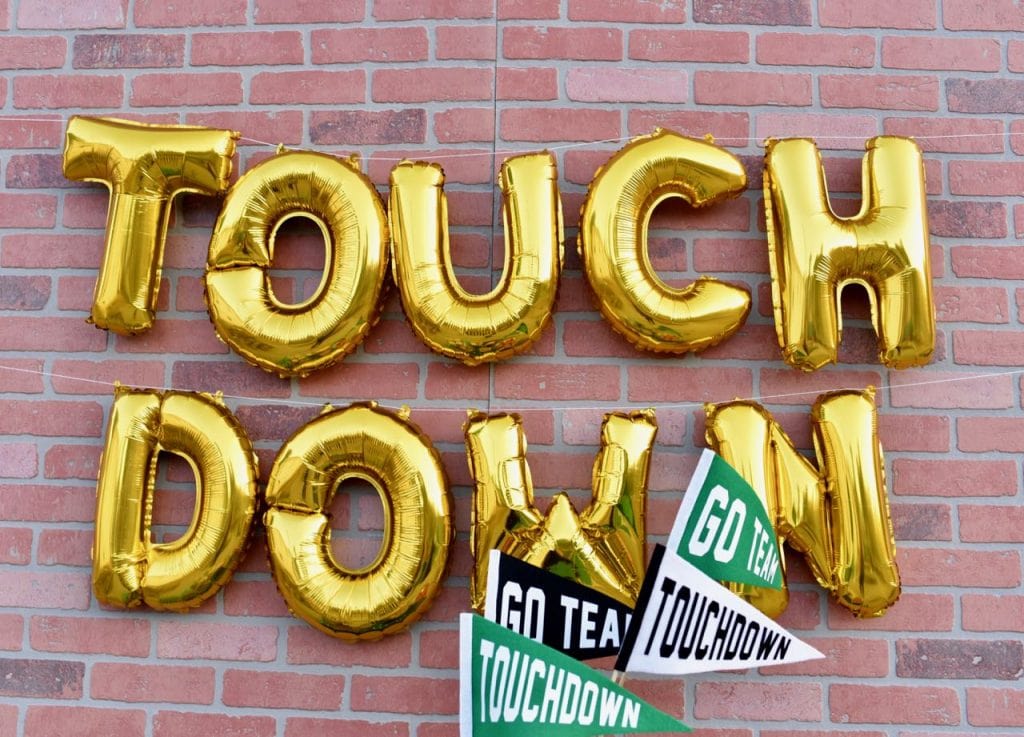 A large artificial turf piece made the perfect tablecloth with a football field table runner layered over the top.  Most of the coordinating serving pieces on the table were made of galvanized steel and all tied the party together. 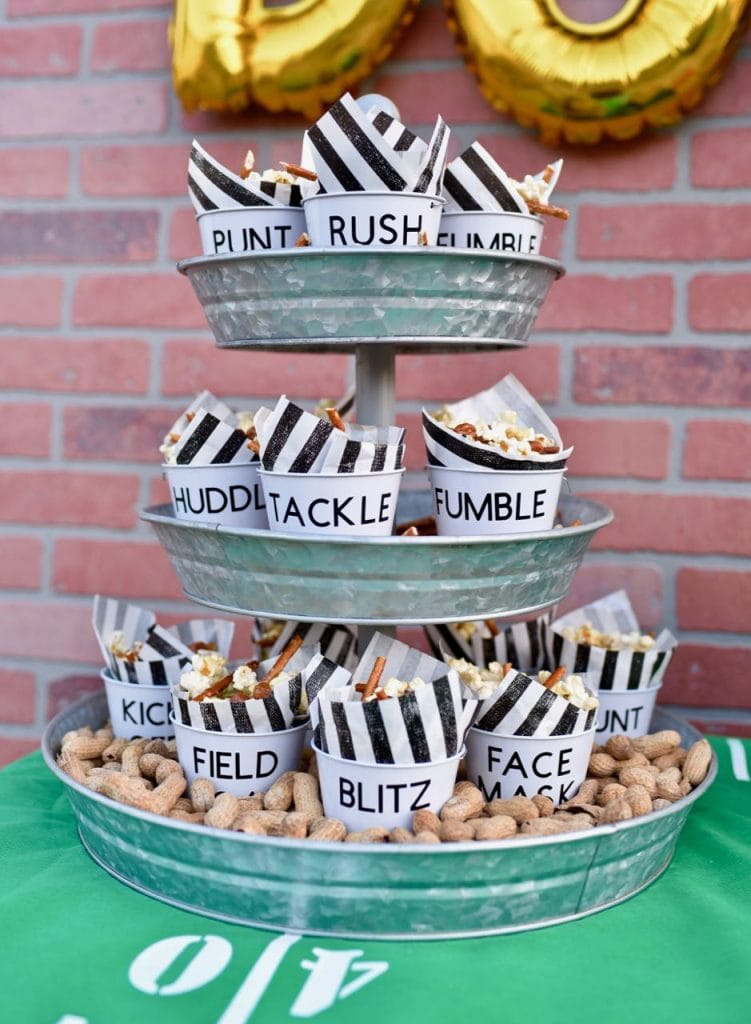 I made THE cutest little snack mix pails!  I took plain white mini pails then cut all sorts of football terms and words out of black vinyl.  The words were added to the front of each snack pail, then a football themed food paper was placed inside before getting filled up with snacks. 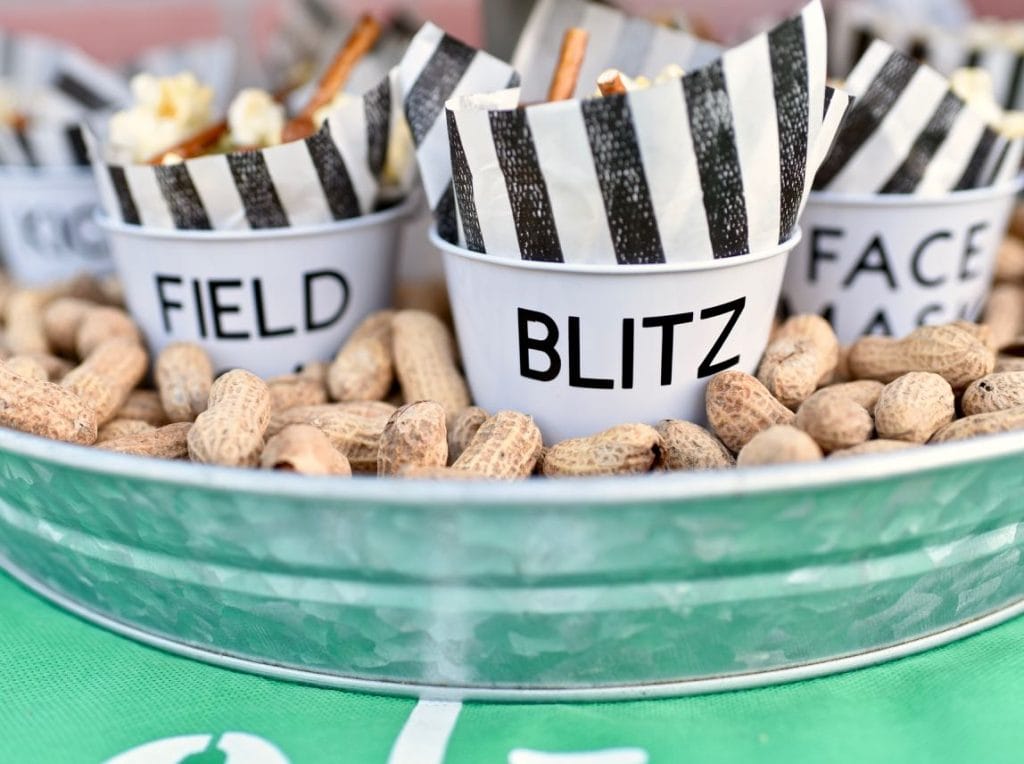 These little statement pieces looked so good on the party table!  And since each has a different football term on it, it’s easy to know which one is yours so your neighbor doesn’t start eating your football party snacks. 😉

What’s a football themed party without great food?  Football party finger food is an easy way to feed party guests without spending all day in the kitchen.

Our football party food was all easily prepped beforehand so that when it’s game time, the food just had to be brought out and placed on the table.  Easy peasy! 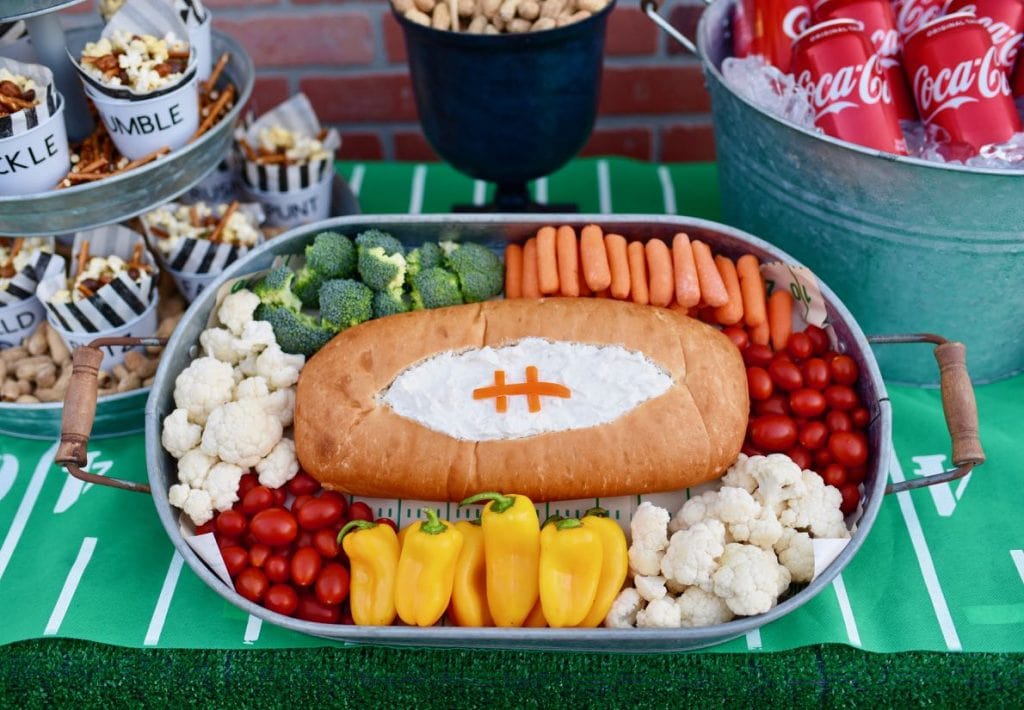 I made a homemade French onion dip that tastes just like the kind my parents made growing up.  No paper envelope of ingredients here!  My homemade onion dip recipe uses real ingredients and takes under 5 minutes to make.  Score!

Keep reading for the French onion dip recipe and directions below. 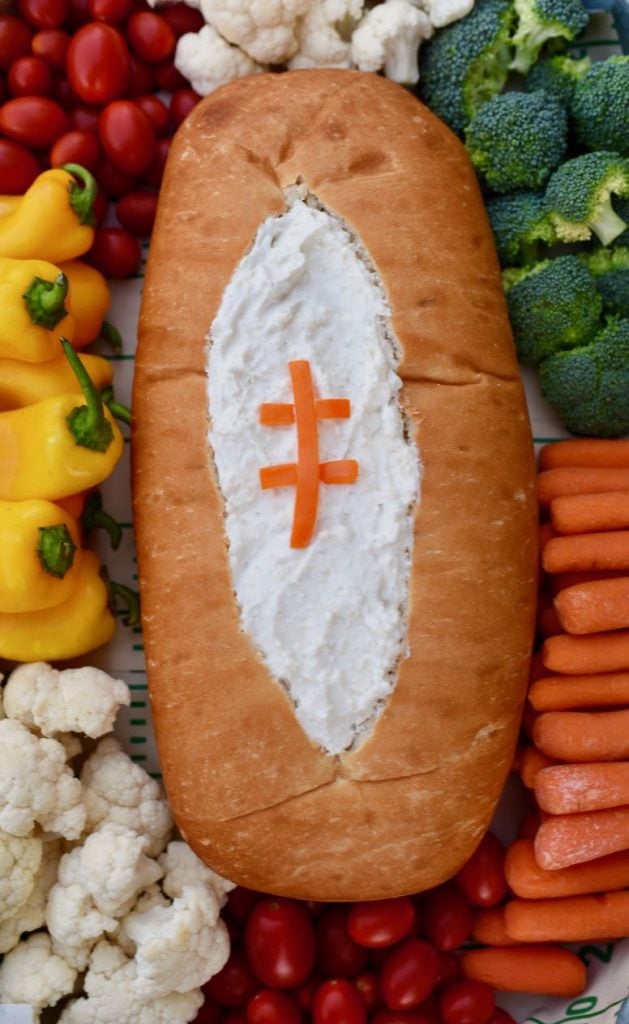 Just add fresh veggies like carrots, celery, mini peppers, tomatoes, and cauliflower, along with cut squares of French bread for dipping, and you’ve got some winning football party finger food. 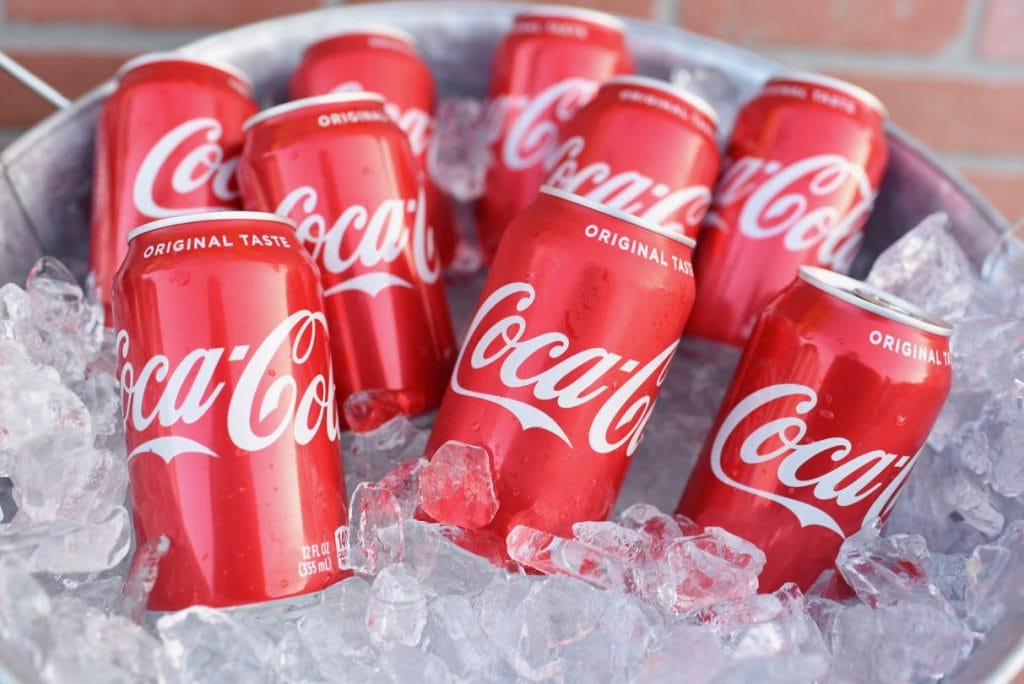 Ice cold cans of Coca-Cola were served in a large galvanized drink tub.  They pair perfectly with the cold veggies and French onion dip, and is a great way to quench your thirst during the game.

To make the football party snack mix I mentioned above, I started by adding some popped up bags of movie theater buttered popcorn.  Next I mixed in some stick pretzels, chocolate covered peanuts, butter toffee peanuts, salted pepitas (pumpkin seeds), mesquite peanuts, and some mixed nuts.

These little football party pails are THE cutest!!

I added some peanuts in the base of a three-tiered galvanized tray for filler, then used pretzels in the top two tiers. 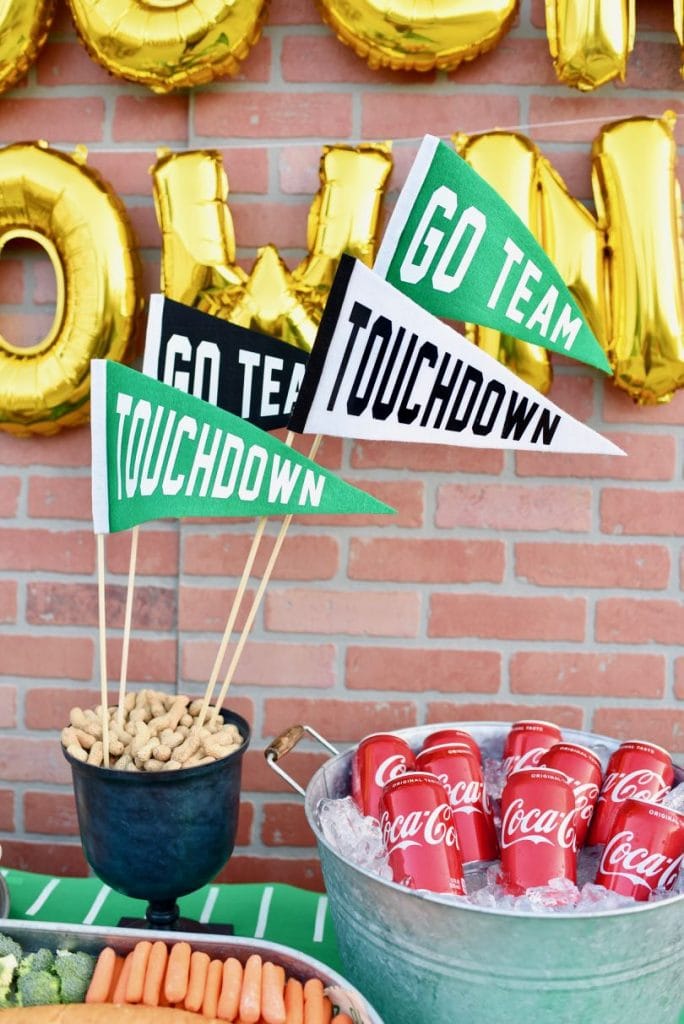 Did you notice the felt pennant flags?  I made those!  I’ll be sharing the easy tutorial for them soon, so stay tuned!

As promised, here’s the recipe for the onion dip.  You definitely want to try making this yummy goodness! 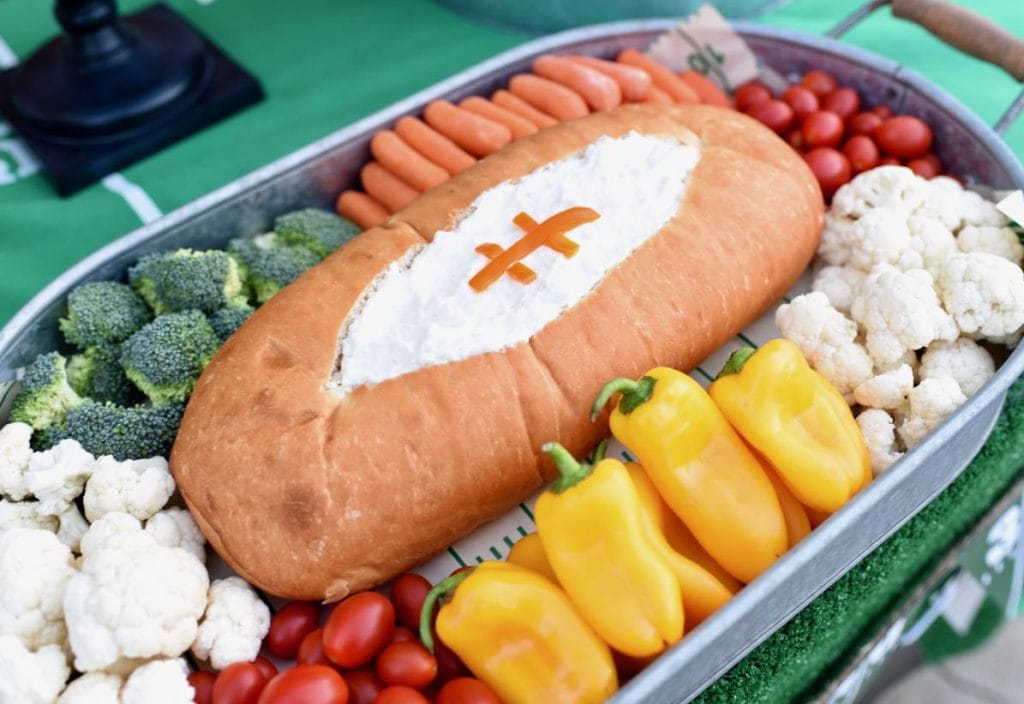 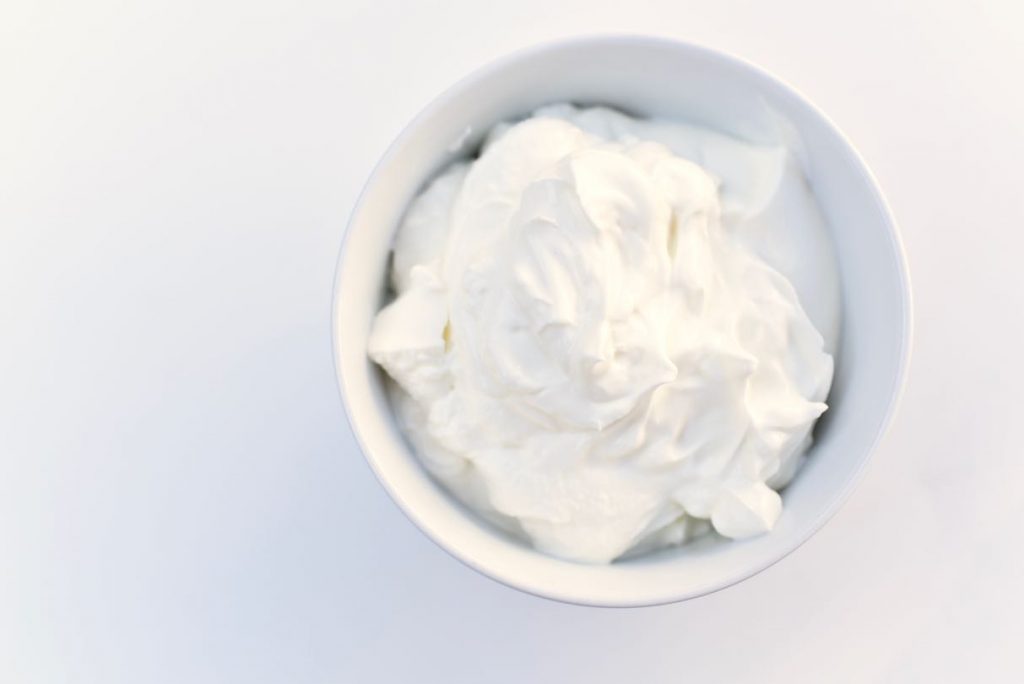 Empty the sour cream into a medium-sized bowl. 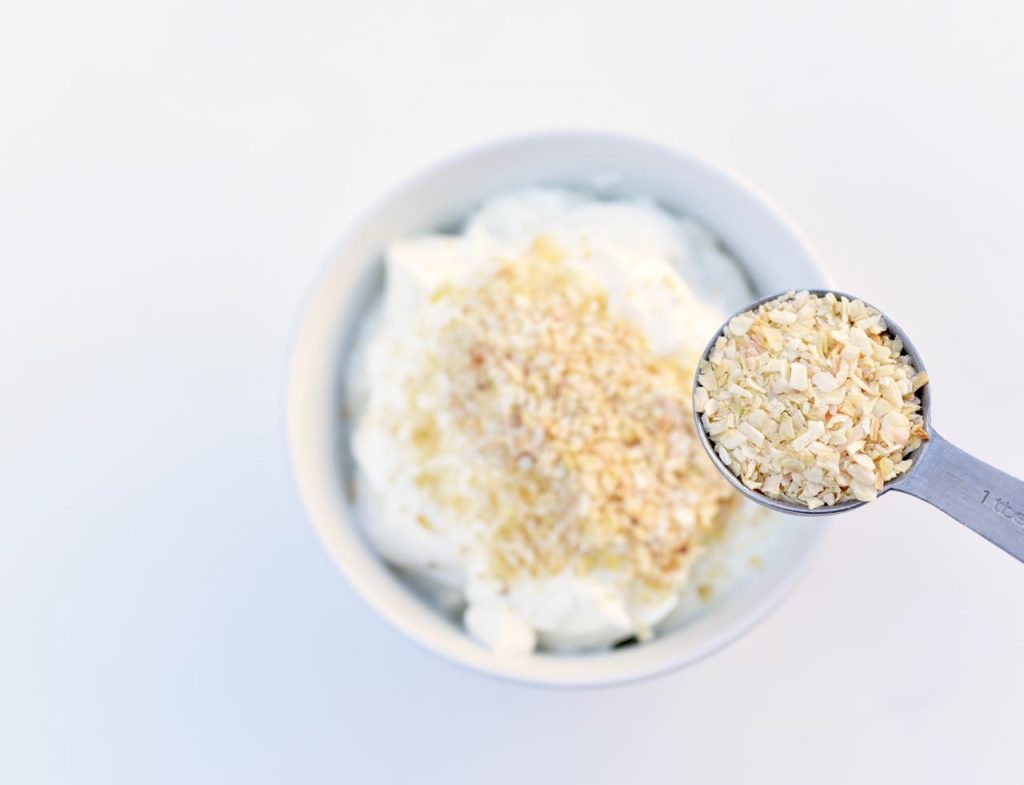 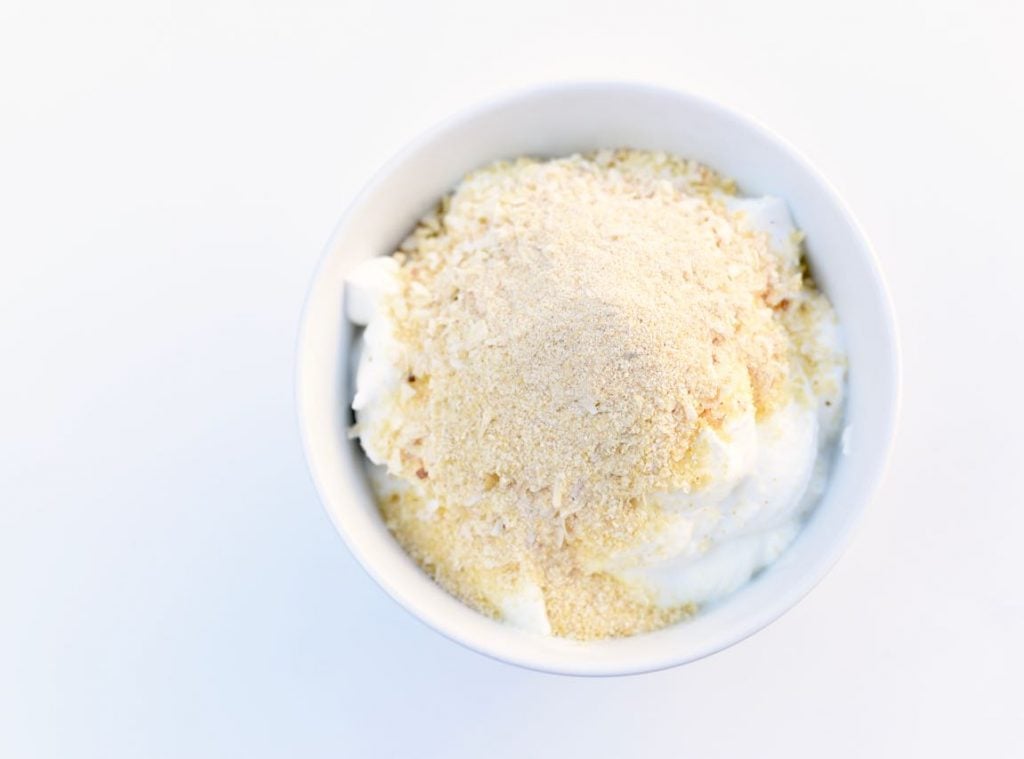 Add the remaining ingredients to the sour cream, then stir until ingredients are completely mixed in. 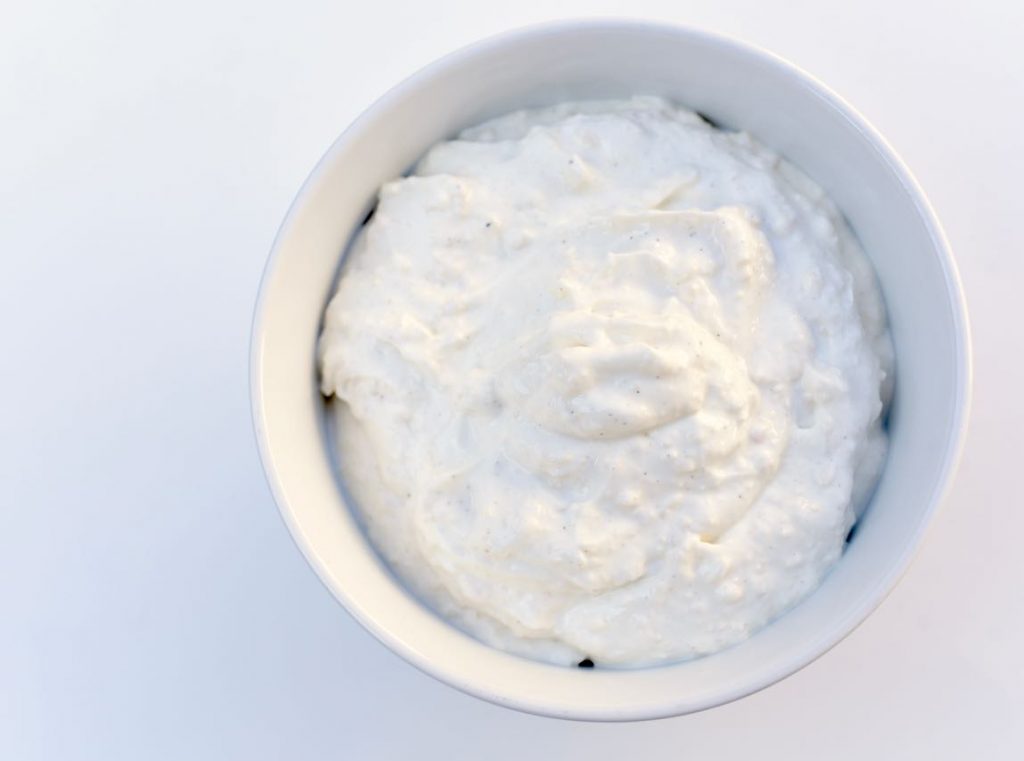 Cover the dip and refrigerate for at least an hour, preferably longer, to allow the flavors to get stronger.

Serve with veggies, chips, bread, or else whatever your heart desires! 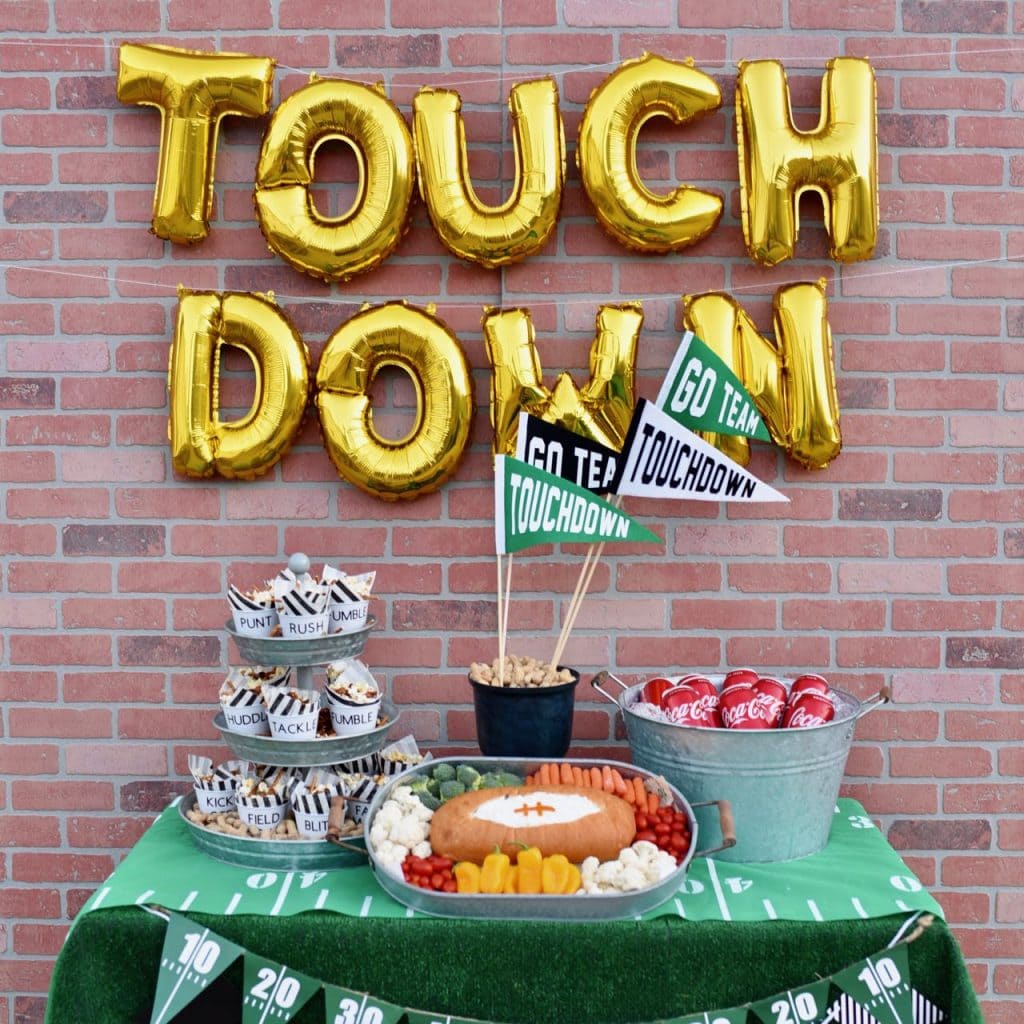 I hope I’ve inspired you with our football themed party and football party food!  Because let’s face it, fall football is as much about the party as it is the game… 😉