Thanks Netflix DVD for sponsoring our LEGO Batman Party!  All ideas an opinions are always 100% my own.  Post contains affiliate links, which means I may get a small commission if you purchase through a link in this post.

If you’ve seen the LEGO Batman movie, then you know that LEGO Batman is a night loving, bad guy-fighting, heavy metal rapping machine.

But did you know that he is also an awesome party theme?  A LEGO Batman party is perfect for a birthday, Father’s Day, or to celebrate the release of LEGO Batman.

We recently threw a LEGO Batman party to celebrate, and I can’t wait to share all the awesome details with you!  This party is guaranteed to make LEGO Batman’s enemy Superman super jealous. 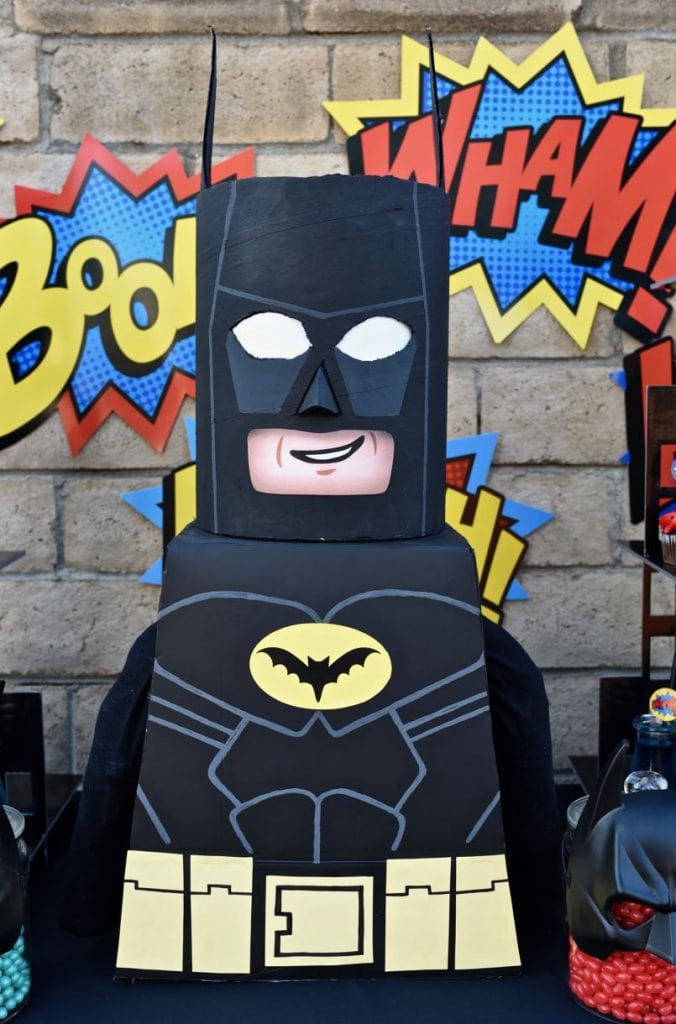 To throw a LEGO Batman party you definitely need a LEGO Batman.  After all, he never skips leg day and has aged phenomenally, right? 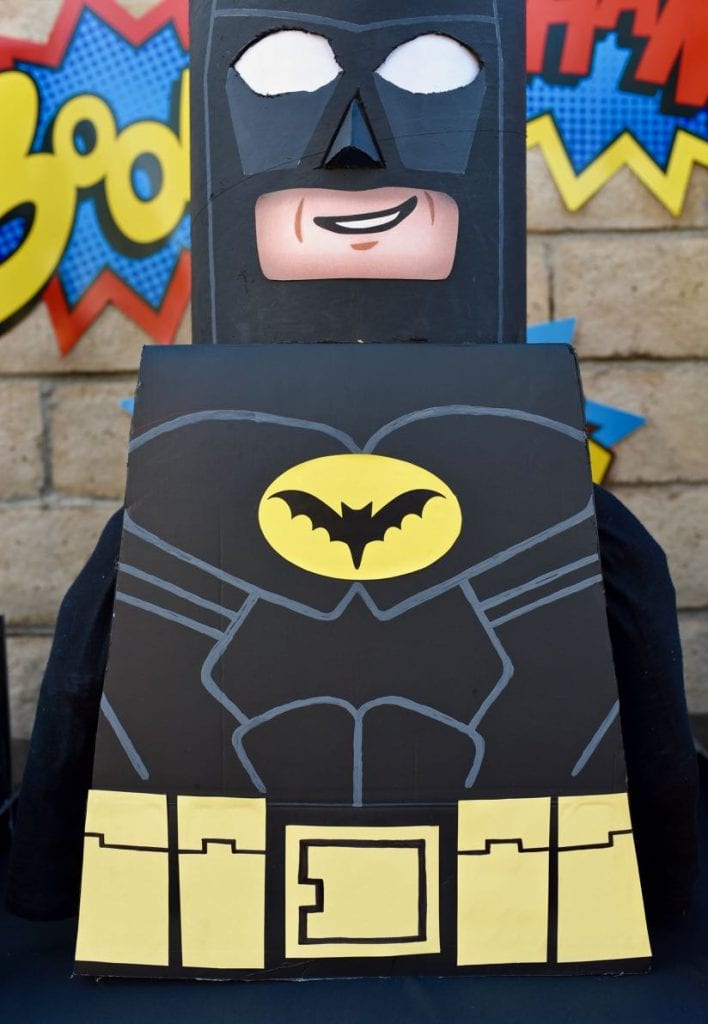 I used a cardboard chips box (thanks Costco) and a cement tube from Home Depot to create a pretty fantastic cardboard LEGO Batman.  This guy is also going to double as my Bat Boy’s Halloween costume, so yay for multi-tasking!

I’ll probably share a tutorial for our LEGO Batman cardboard costume him as it gets closer to Halloween, but I still can’t believe what can be made with some cardboard and paint. 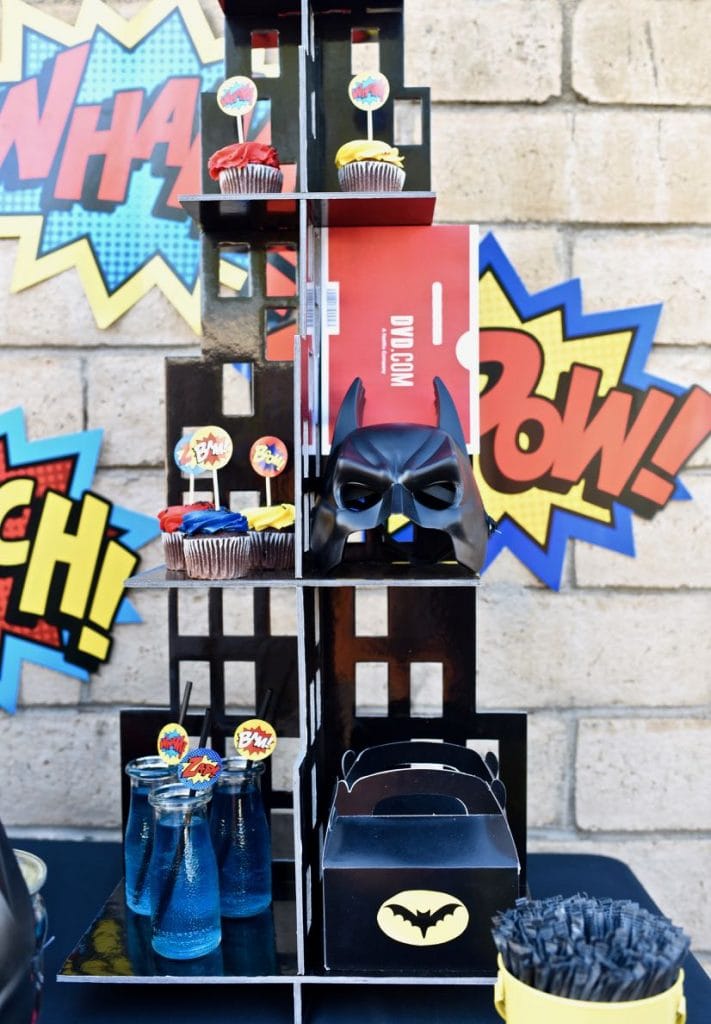 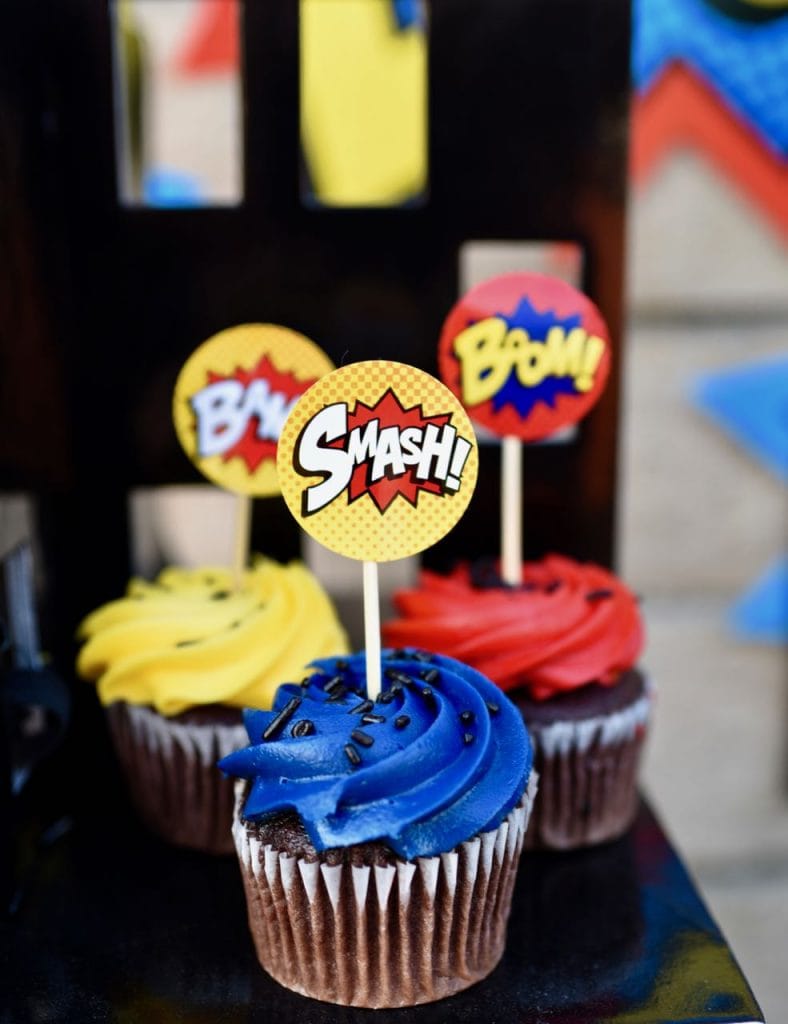 Each cupcake had a superhero topper I made from a toothpick and superhero stickers that I got from Oriental Trading Company.

The red, yellow, and blue cupcakes matched the superhero words in the backdrop perfectly! 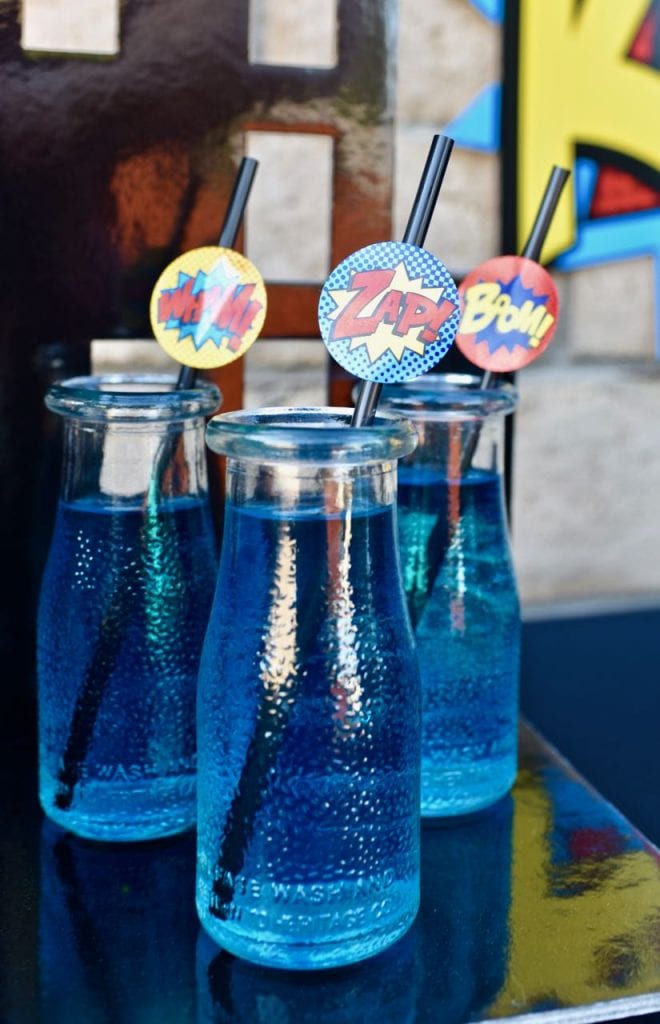 Bright blue drinks each had a black superhero straw in them (made from the same stickers as the cupcake toppers). 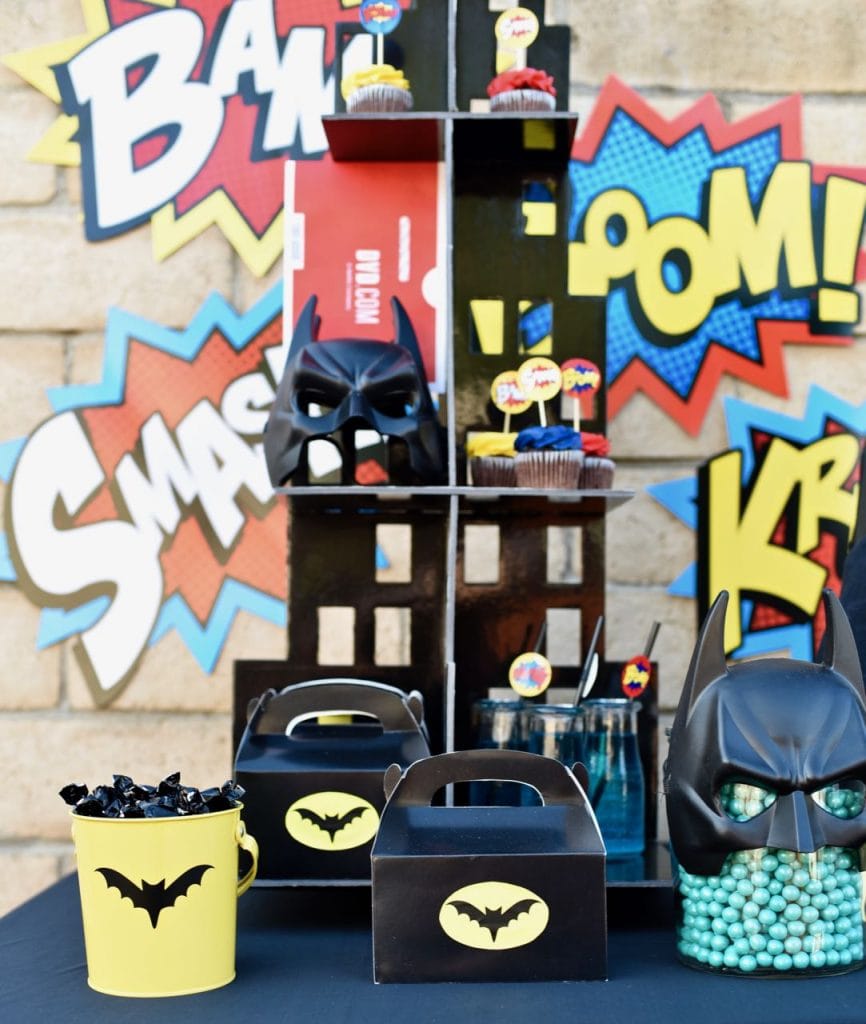 I made some LEGO Batman treat boxes by adding yellow ovals and black bats to the front of black favor boxes.  I used my Cricut Explore Air 2 machine to easily cut the vinyl shapes out. 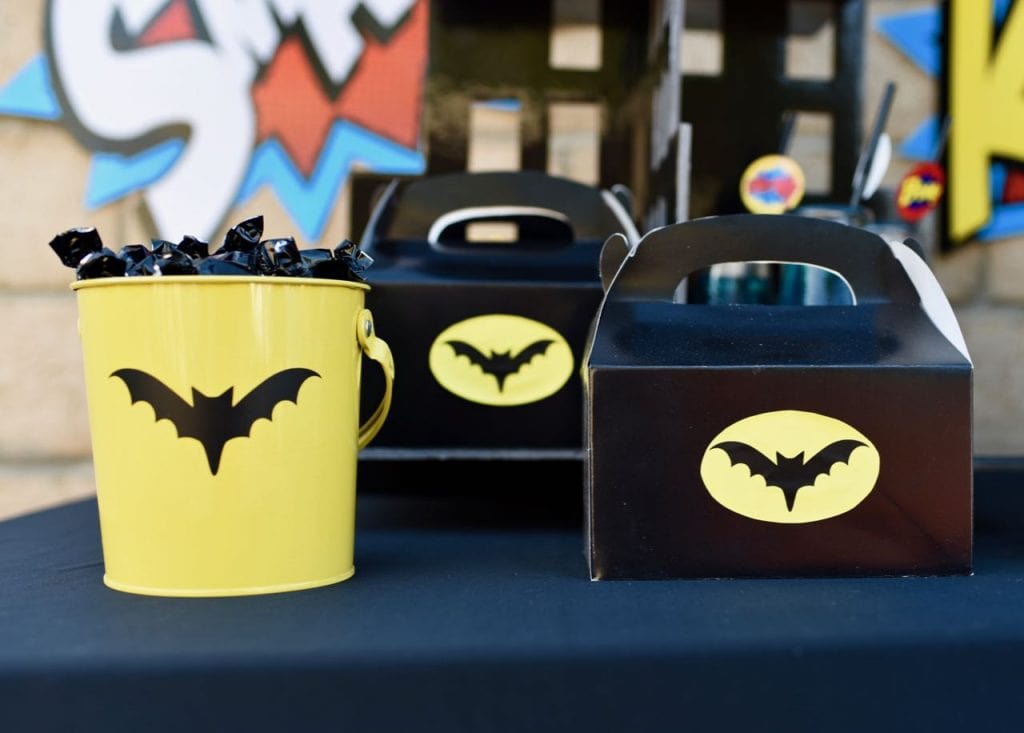 Plain yellow buckets were made into LEGO Batman candy holding machines by adding a black vinyl bat to the front of each.  The buckets held black foil-wrapped caramels and  black candy-filled straws. 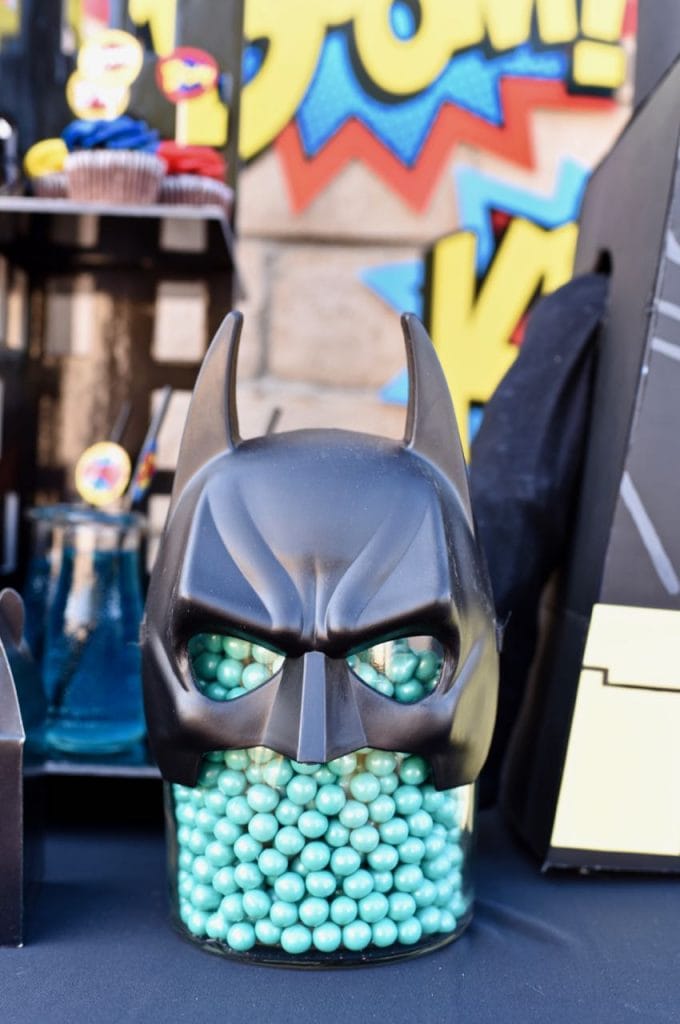 Big jars of candy were personalized by wrapping a Batman mask to the front of each jar.  So easy! 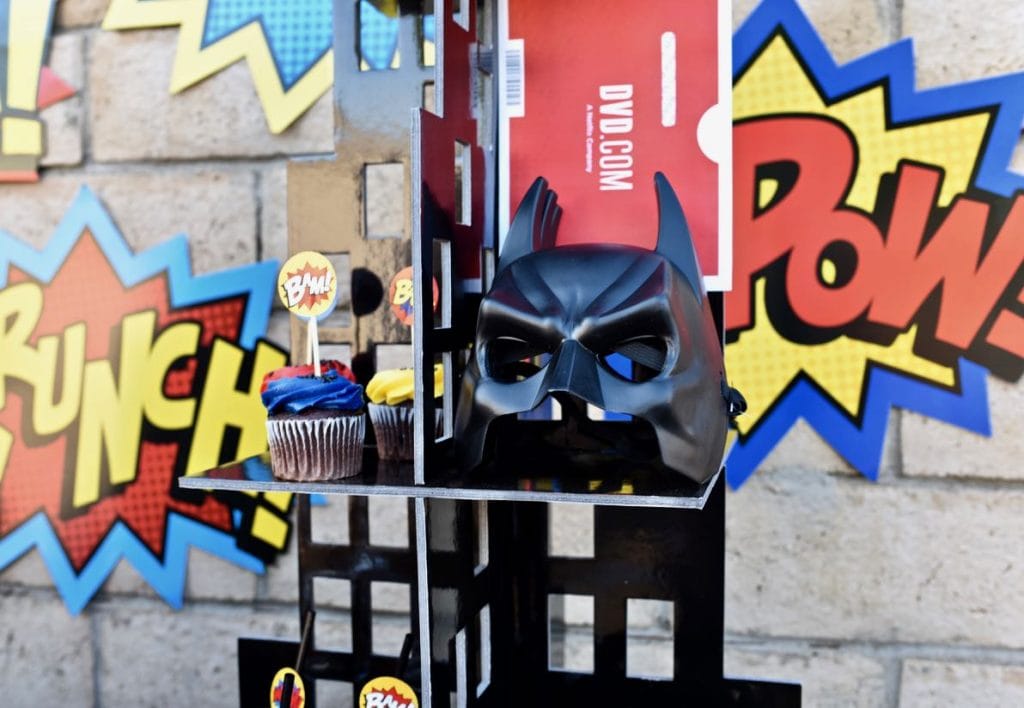 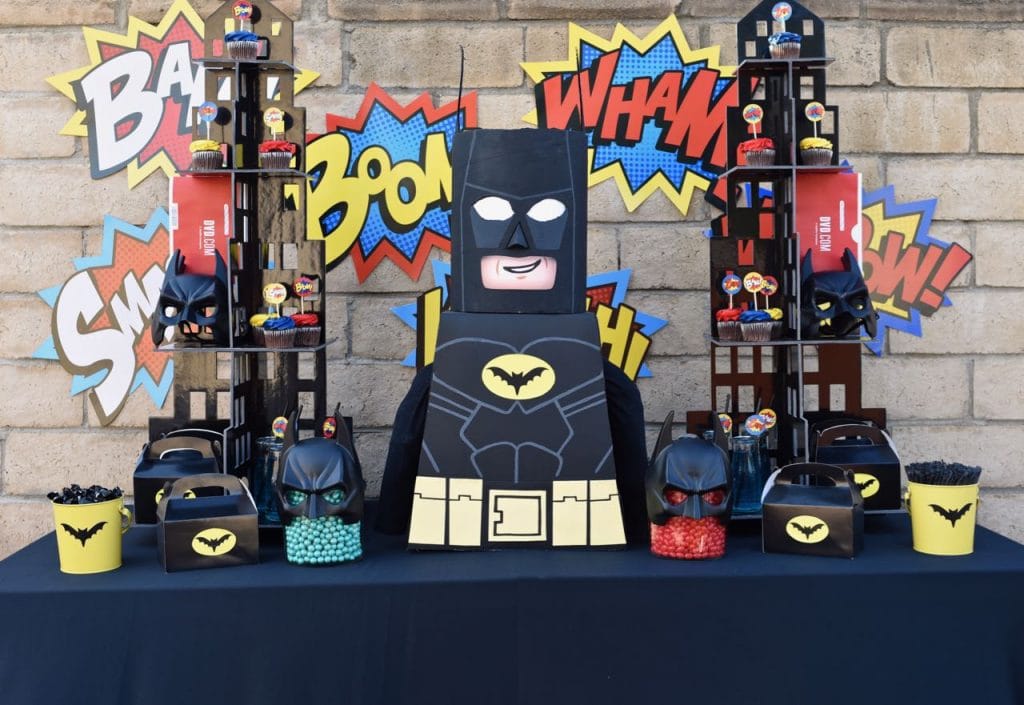 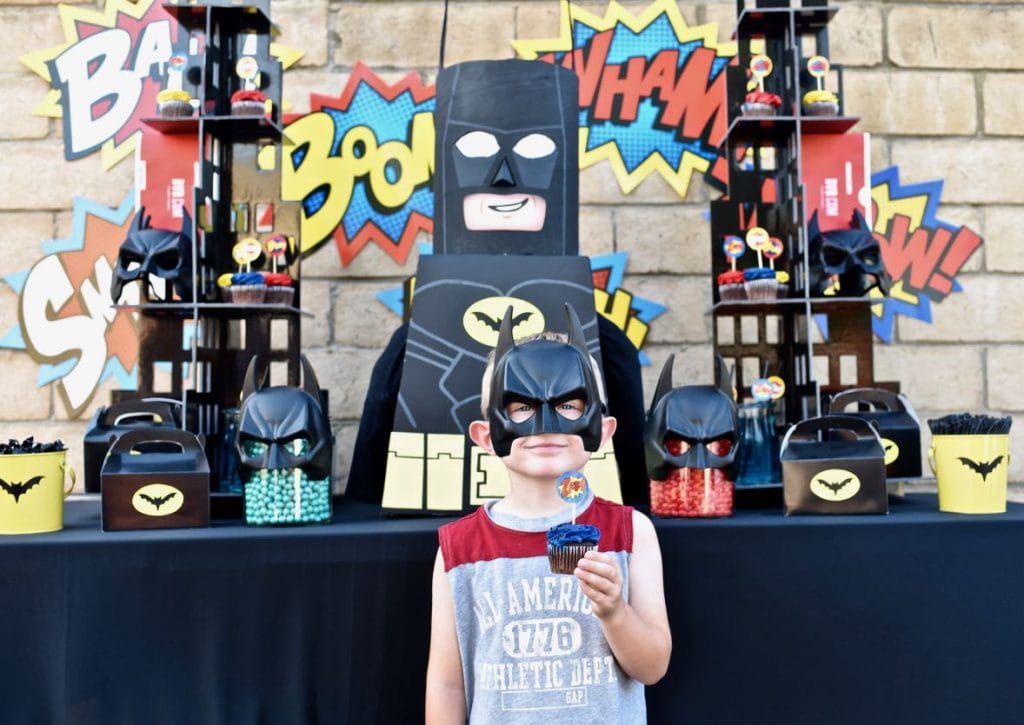 My Bat Boy was most excited about the cupcakes and couldn’t wait to dig in!