My daughter recently had a birthday, so I decided to throw her a royal Sofia the First slumber party! Since we all know that princesses have tea parties, I decided to also have a tea party theme for the party, which was a lot of fun for the girls (and let’s face it, for me!). 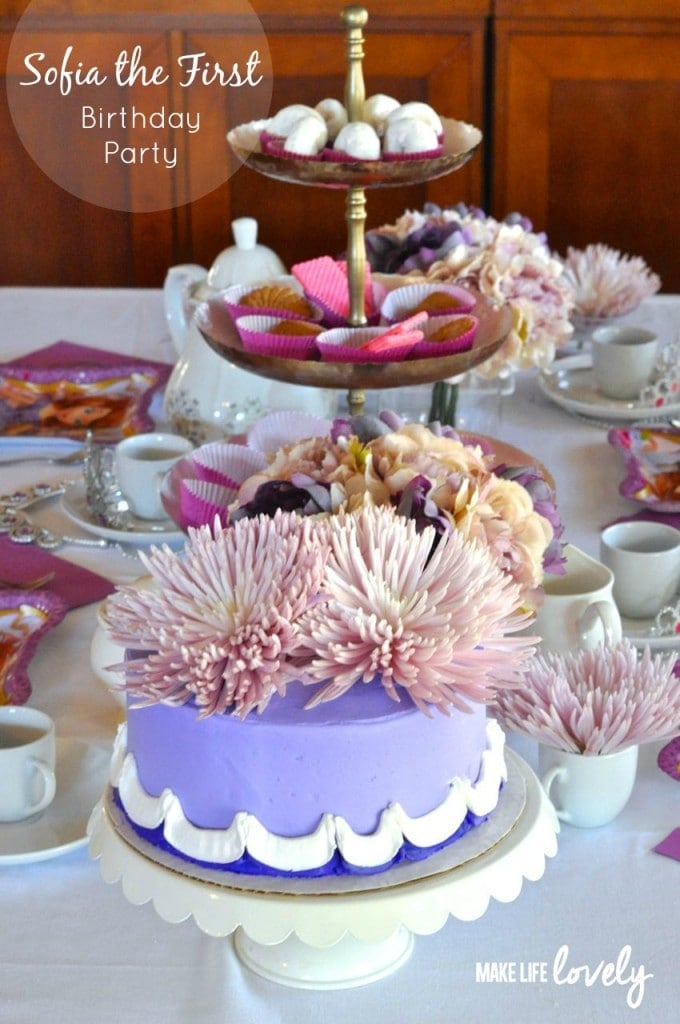 This Sofia the First party was actually really easy to plan and put together, because I bought just about everything that I needed at Walmart.

From the plates and napkins to the food and the toys and the bedding, they had pretty much everything I needed to throw the perfect princess bash! 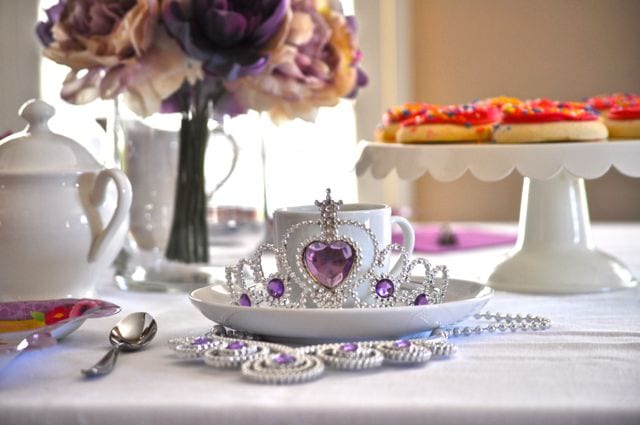 When the girls arrived to the house, they were excited to see that next to each place at the table there was either a purple or pink tiarra with matching necklaces and earrings, another Walmart score.  They immediately put on all of their jewelery, and started playing with the Sofia the First Castle and the Royal Family dolls.

I had the castle all set up and ready to go, but let the girls open up the dolls.  They played for a few minutes until I had made the sandwiches, then they came to the table for the tea party. 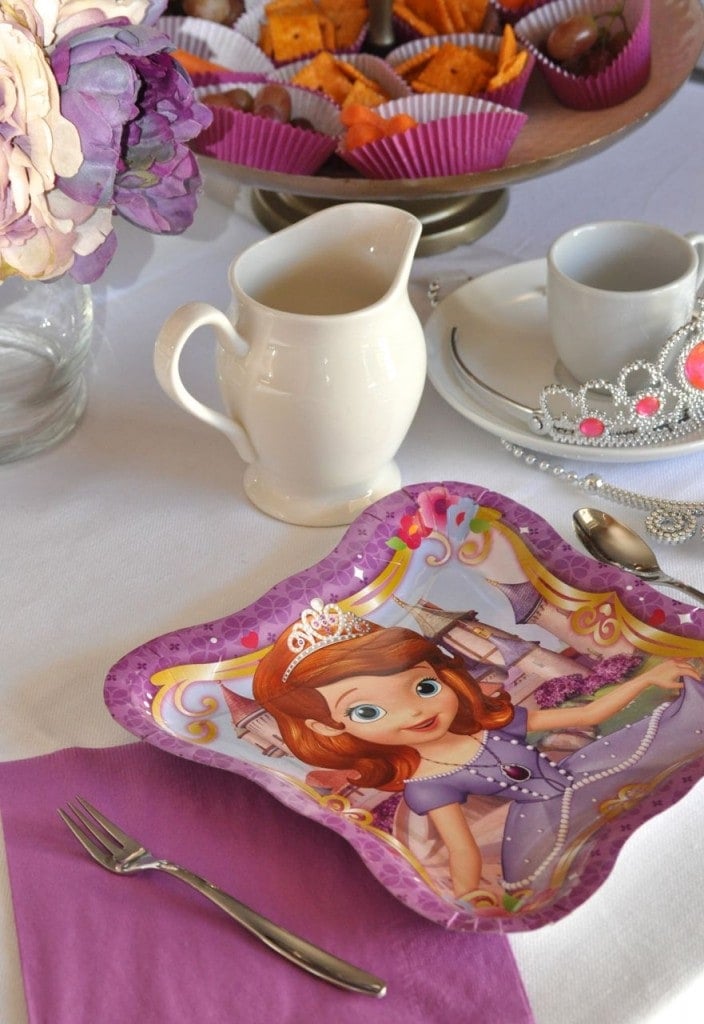 For the tea party table I placed some purple and pink Sofia the First paper plates and purple napkins on a white tablecloth. 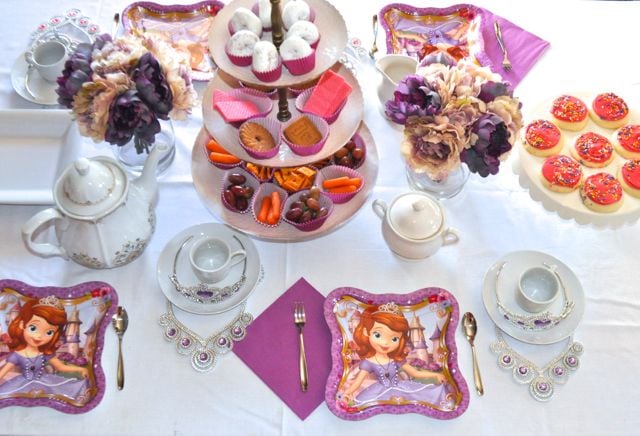 I added some very small forks and spoons that I used for my Downton Abbey Tea Party, as well as some tiny tea cups and saucers that the girls LOVED drinking their apple juice “tea” from. 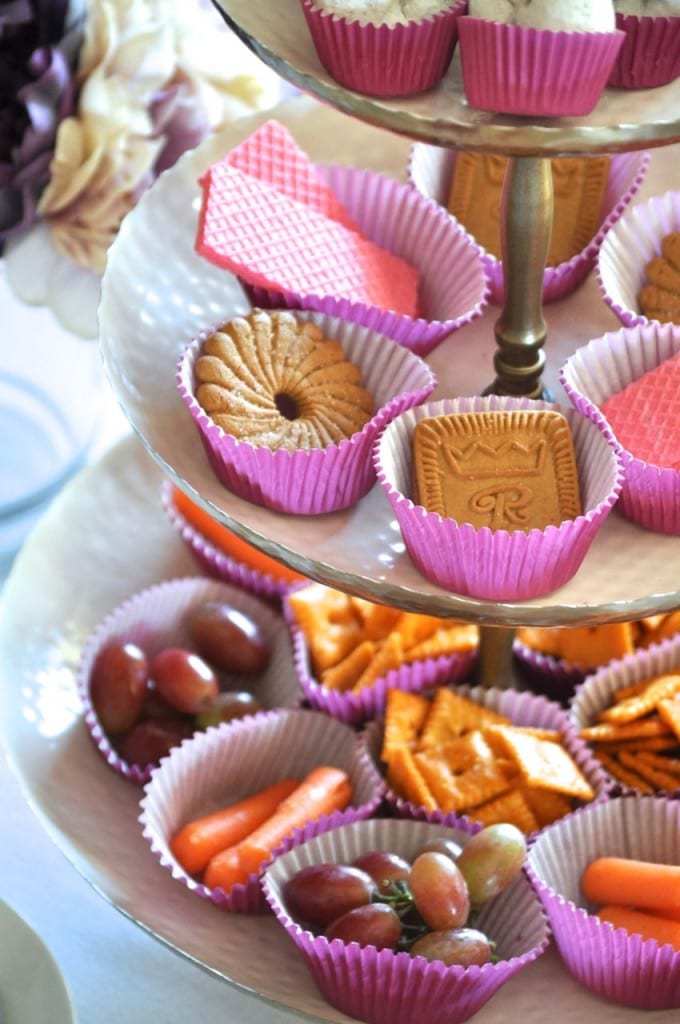 By putting the food inside the small purple cups and placing them on my three-tiered serving tray, they definitely looked fancy enough to feed to a table of hungry princesses! 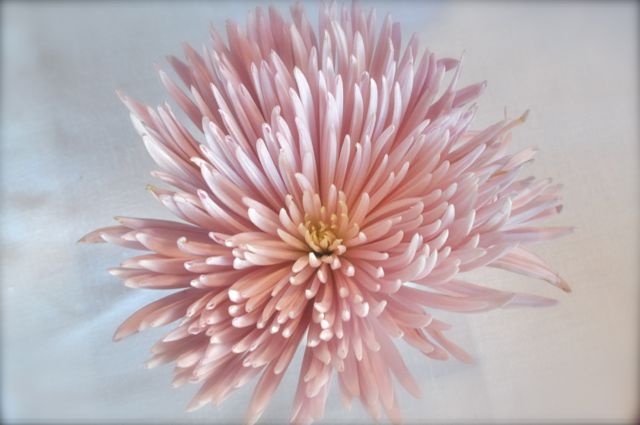 I added some purple fresh flowers to the table in small containers to add some color and more prettiness to the table. 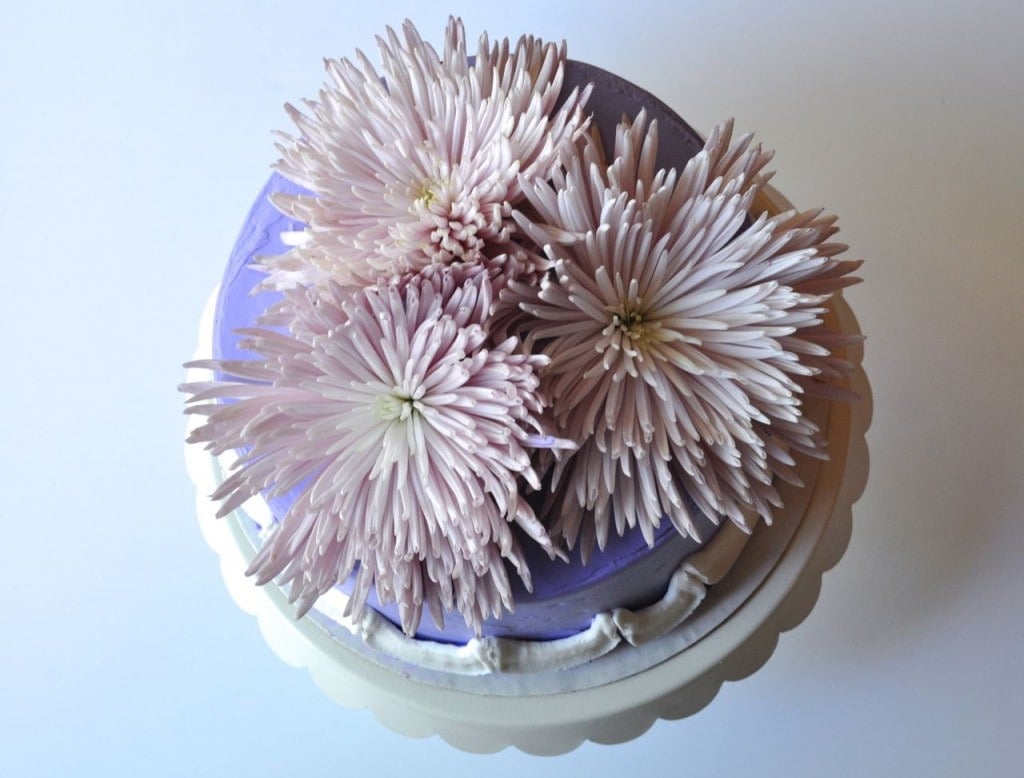 I also added some of these gorgeous flowers onto a plain purple bakery cake, which was a great way to make a plain cake go from simple to stylish and elegant! 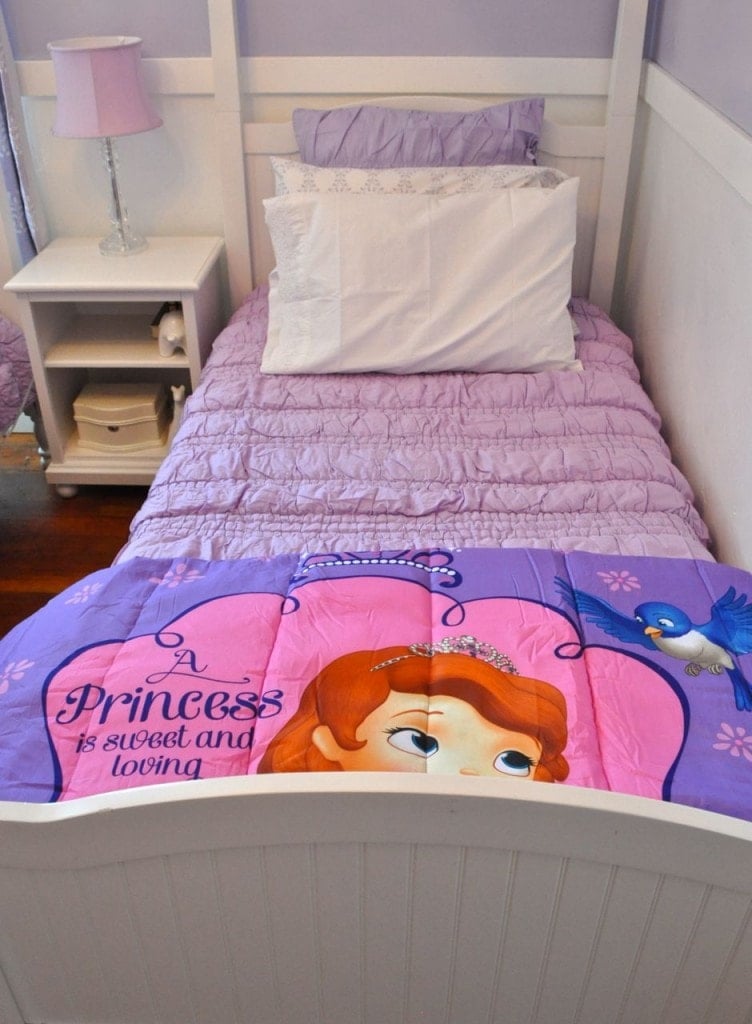 After the tea party, the girls wanted to go play in my daughter’s room, so they took the castle and toys in her purple and white bedroom (perfect for a Sofia party!) 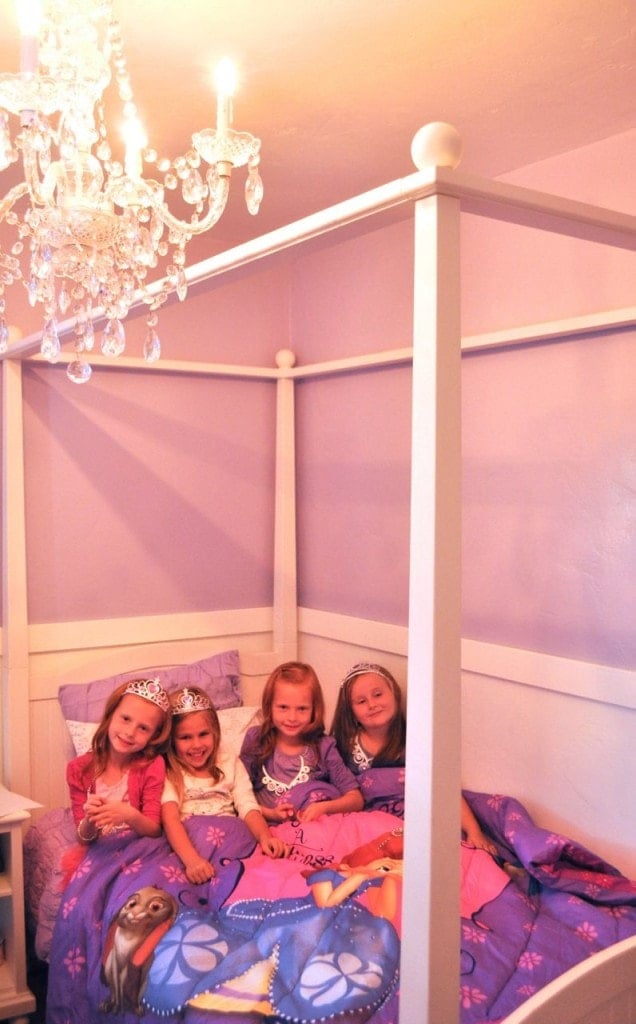 My daughter’s room even has a gorgeous chandelier hanging from the ceiling, so the girls loved playing in there.  They even got on the bed and snuggled with the cozy Sofia the First comforter that I bought.  Aren’t they adorable?!

After playing for a bit longer, it was time to do the girls’ nails.  I bought some pretty sparkly and glittery light purple nail polish (Quick Dry of course!), and did each of the girls’ nails.

I had bought some movie candy for the girls, so while the movie was starting, I made up individual little bags of a variety of candy for each girl.

They were VERY into the movie, and stayed silent the entire two hours! 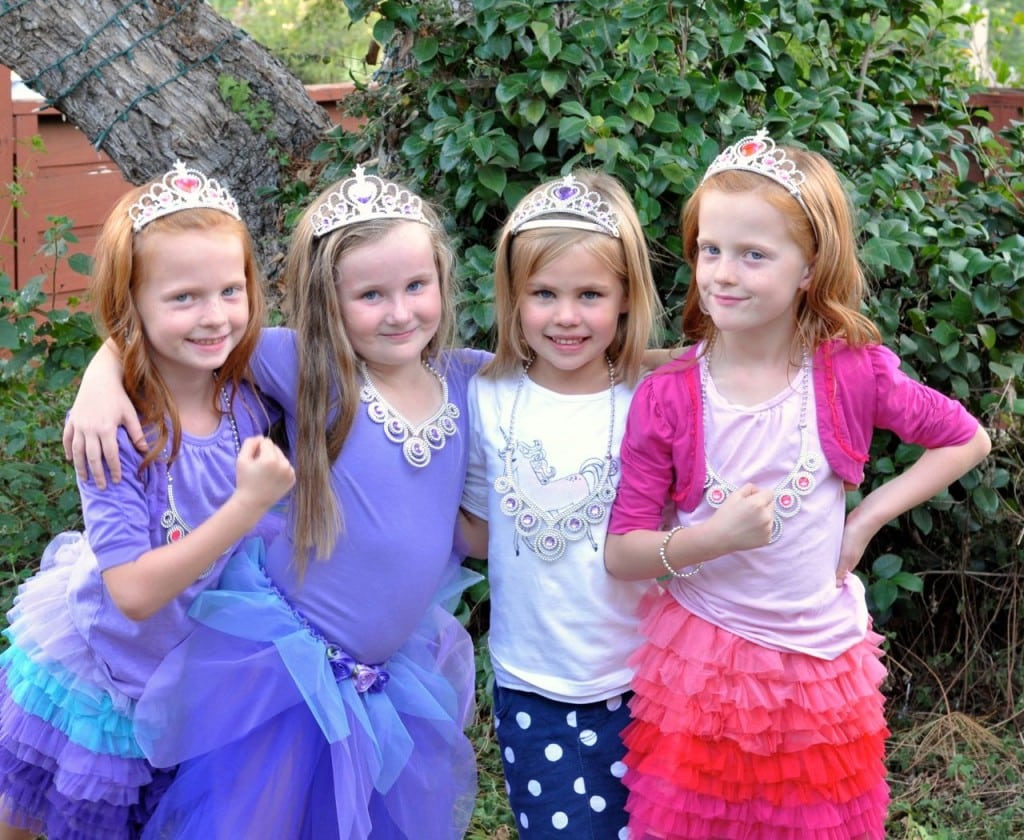 After the movie it was bedtime.  When the girls each left, they were given their own Sofia the First cup and a coloring book, plus they still had their tiaras, necklaces, and earrings.

I’m not exaggerating when I say that this Sofia the First birthday party was very easy to put together, and the girls all had such a great time together!

I’m so glad that my daughter could celebrate her birthday with her family and friends and one of her favorite characters.  I know that it will be a special birthday that she will remember forever!

For more birthday party ideas, be sure to check out these fun parties: 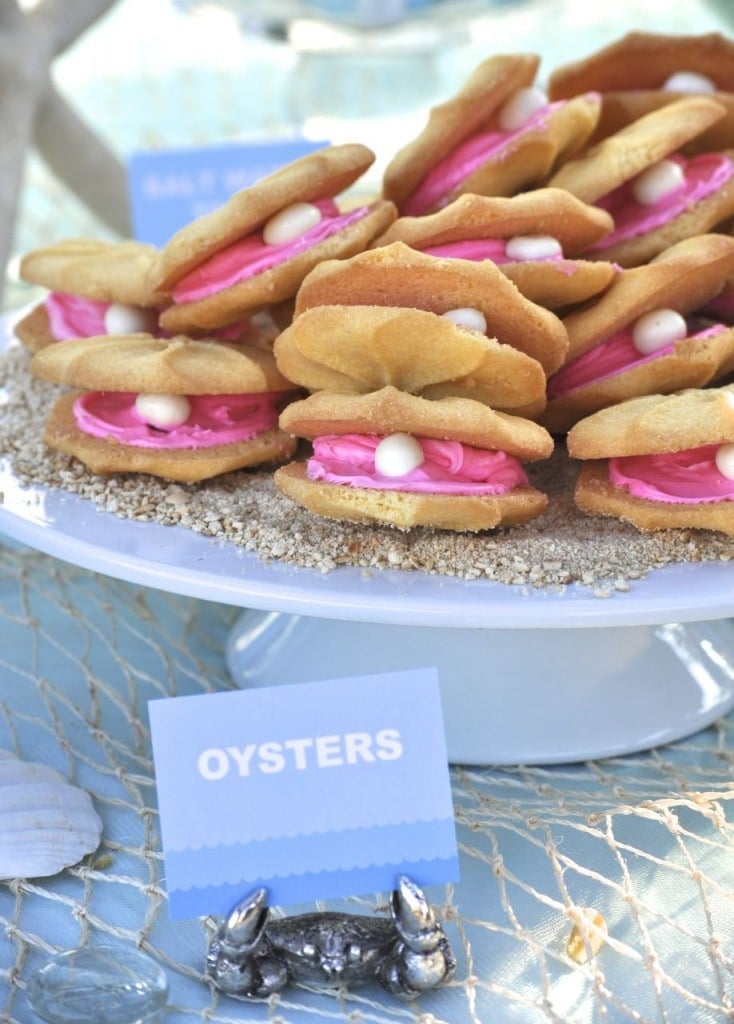 Under the Sea Party 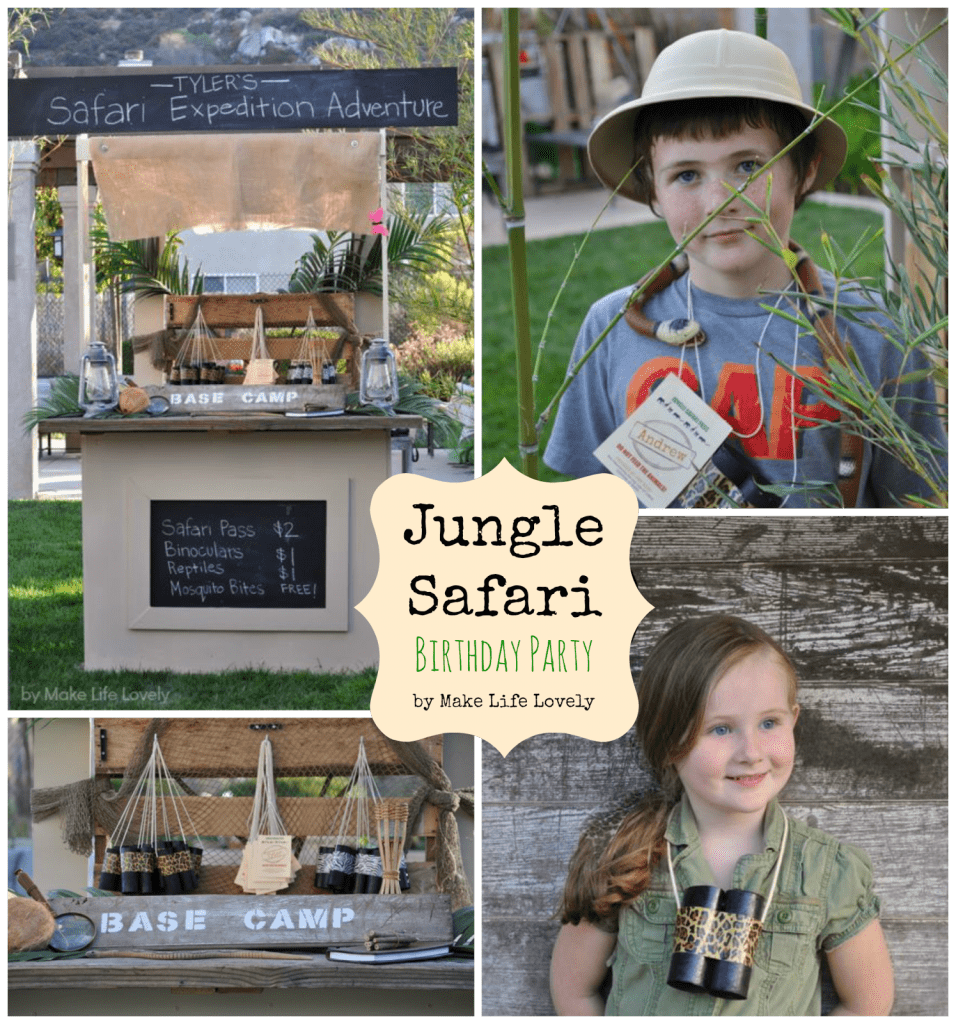 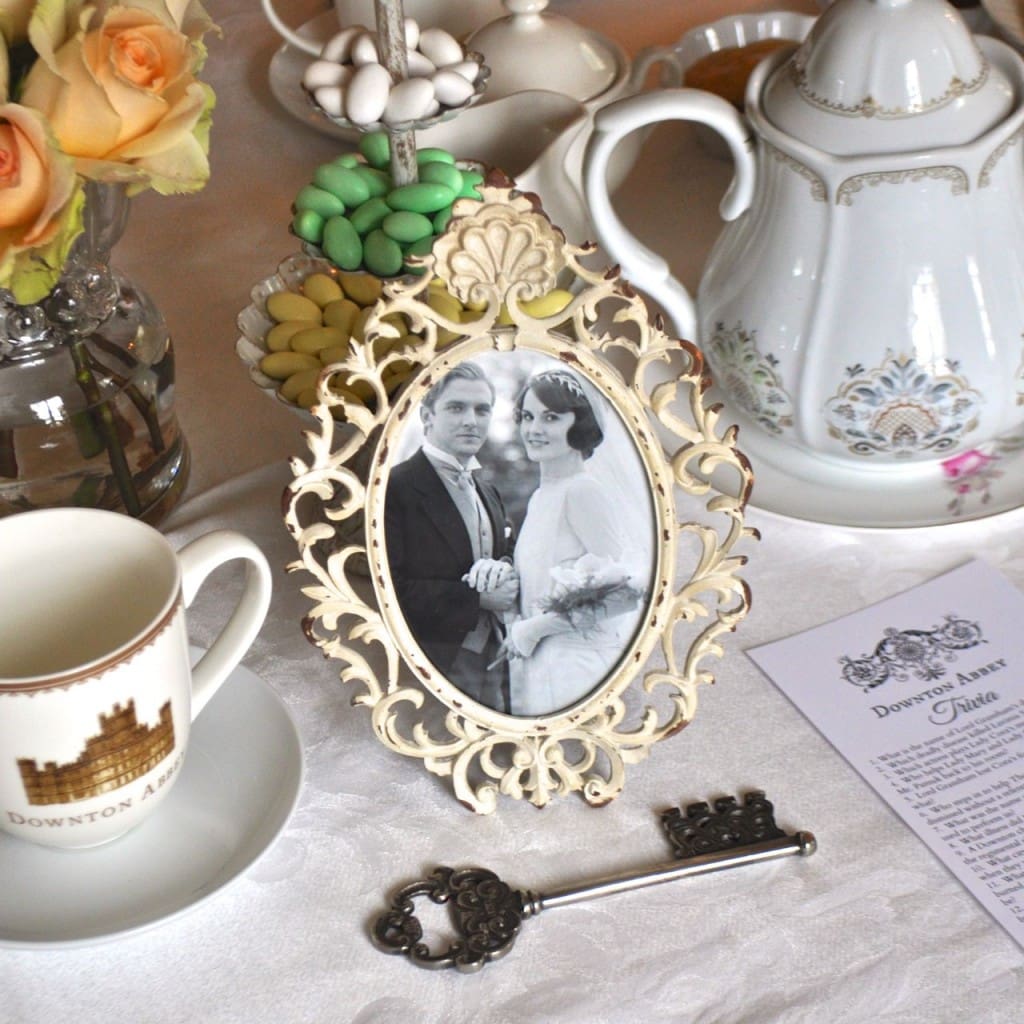