If words like skins, scar, chest, and drops are part of your daily vocabulary, then you’ll LOVE one of the coolest Fortnite costumes I created- the fortnite bush costume!

My teenage son came to me a few weeks ago and said, “Mom, can you make me this for Halloween?”  It was a screenshot of the Fortnite bush.

Making your own costume means that you will have one of the few Fortnite Halloween costumes out there, instead of the same costume that hundreds of other people have.

WATCH THE VIDEO ABOVE TO SEE THE BUSH COSTUME IN ACTION!

This Fortnite bush costume is great for Halloween, for a Fortnite cosplay costume, for Comic-Con, or just to scare someone walking by in the park when you’re disguised as a bush.  It’s also a great excuse to become one of your favorite Fortnite costumes in real life.

While some might think that the bush shouldn’t be legendary in the game, can we all just agree that this bush costume is the most legendary of them all?! 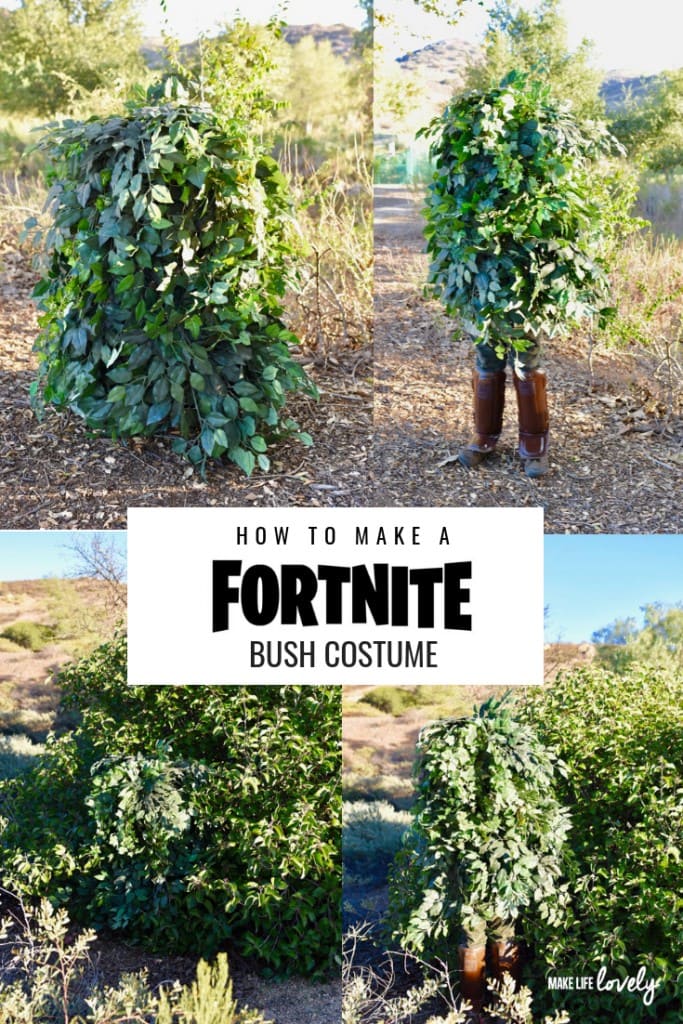 First, you will need to make the frame out of chicken wire to fit around the person that will wear the Fortnite costume.  Wearing gloves is totally optional, but I found they worked really well in protecting my hands when cutting and bending the chicken wire.

Take a piece of chicken wire and carefully wrap it around the person who will wear the costume.  Make sure to leave a wide enough gap so there is enough space for the person to move around inside the wire. 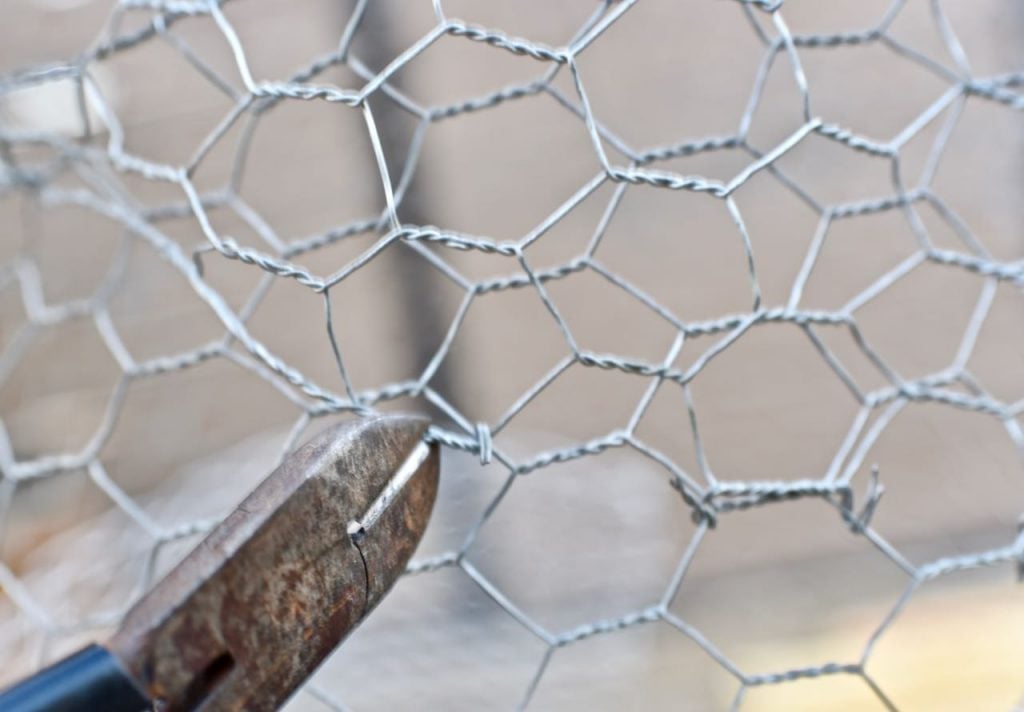 Lift the wire off the person, then cut along one edge of the wire.  Twist the ends of the wire together to make a large chicken wire tube.

For the top of the frame, I took another piece of chicken wire and made a rounded top.  I attached it to the rest of the frame by twisting the wire ends around the other chicken wire.

Place the person back inside the bush costume frame to see where their arms are.  Cut two large arm holes so the person inside can put their arms out if necessary.  Again, either fold out the sharp edges, cover them with Duck Tape, or cut them off all together to ensure that the person inside is comfortable and safe.

You can also line the whole inside of the wire frame if you would like with inexpensive felt or another thick fabric.  Just make sure to leave a large rectangle open at eye level so the person inside can see! 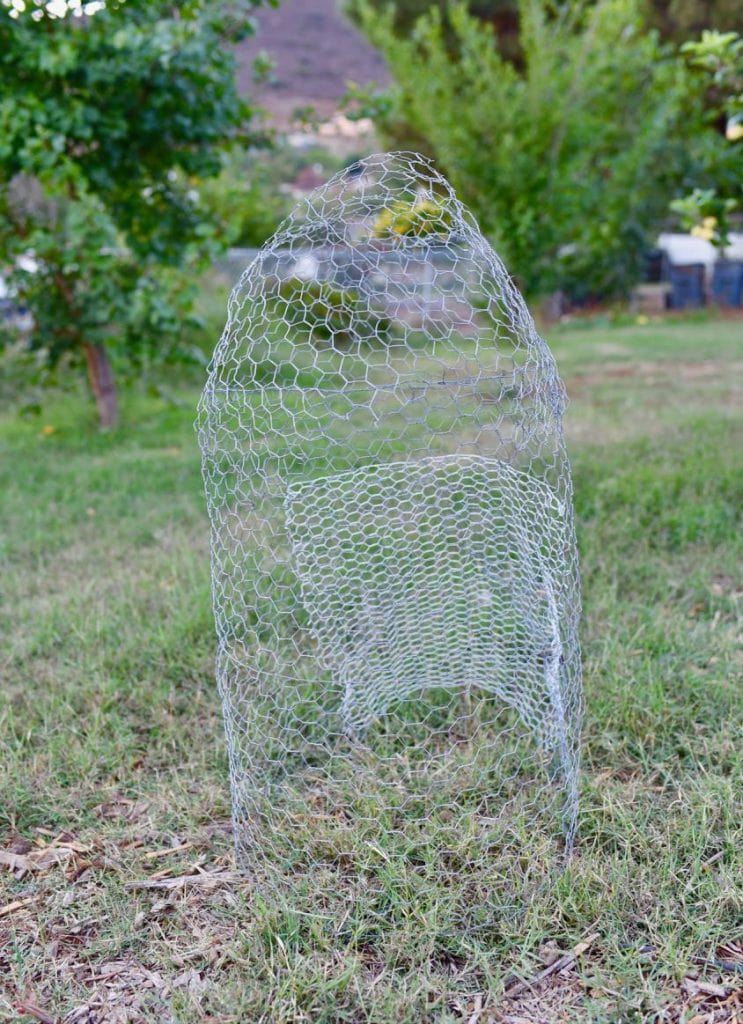 The wire frame does NOT have to be perfect.  As long as it fits the person and is comfortable and not sharp, then you should be okay.  Make sure that you have the person who will be inside practice standing up and then squatting down (if they plan on going into bush mode) to test if the frame is wide enough at the bottom.

I ended up making the frame wider on the bottom than I did on the top since my son needed room for his bent knees when he went down like a bush.  You will have to gauge this yourself depending on the size of the person inside.

When you add a lot of leaves to the frame, most of the imperfections disappear under the leaves, so don’t worry too much about making the perfect shape.

See how crazy mine looks right now?  It all ended up okay in the end.

This is the most frustrating part of making the Fortnite costume, I’m not going to lie.  BUT, once you get the frame made, the rest is much easier!

Where to get the leaves 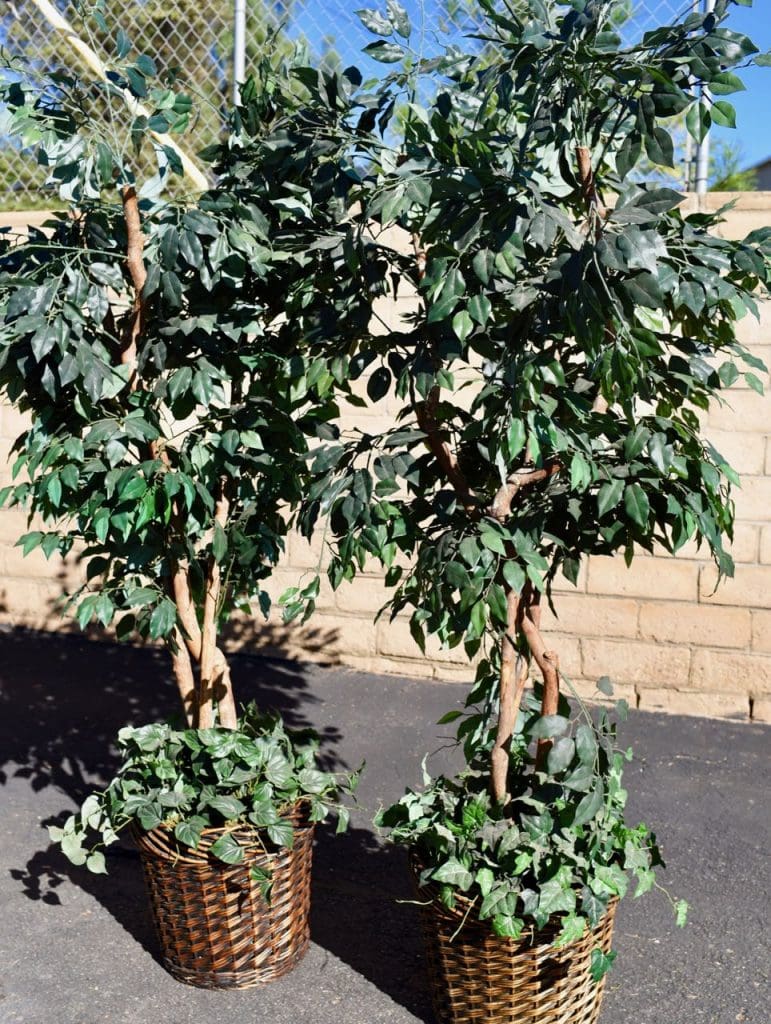 Instead, my brilliant husband went on Let Go (an app kind of like Craig’s list) and found someone selling two big fake trees for $20 each.  They were perfect!  One large tree probably would have done the job.

You can also check Craig’s list, thrift stores, and garage sales for fake trees that you can buy for cheap to get all the greenery you need.

You can also use real leaves, which I almost did.  This would be fine for a one-time use Fortnite cosplay costume or a Fortnite costume for Halloween night.  If you want to use the costume for more than one night, however, the leaves will wilt and you will have to do all the work more than once.

How to add the leaves

I pulled the small branches off my fake tree, then weaved each branch into the chicken wire.  Luckily, I didn’t need to use any wire or anything to attach the leaves, which made this part nice and easy. 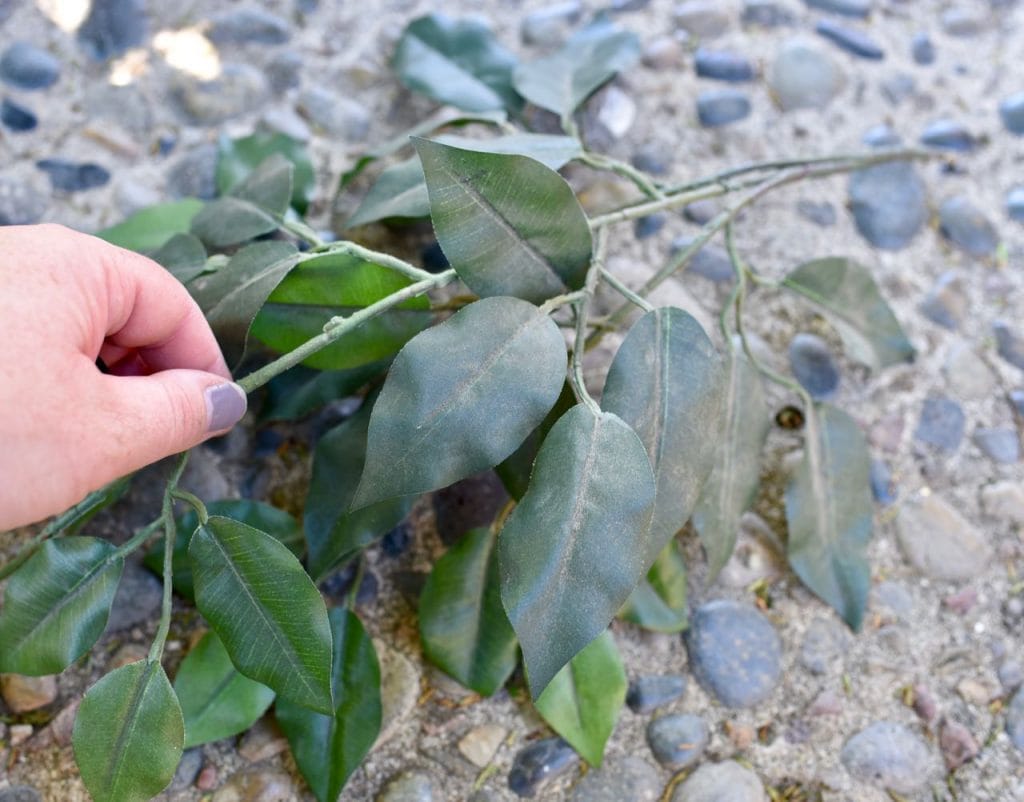 Each piece went in the chicken wire, then I would reach my hand through one of the arm holes and weave the stem in once or twice in and out of the wire.  If your stems are thinner, you might need to weave it in a couple more times to it’s nice and secure. 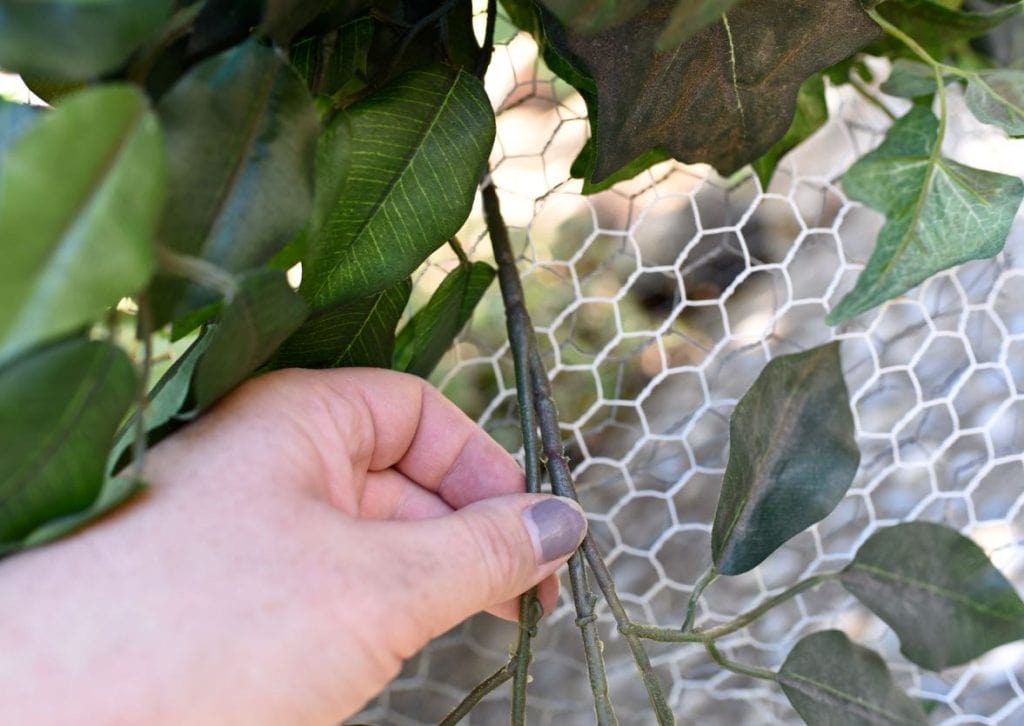 I started at the top and made my leaves and branches poke out a bit so you couldn’t tell that the top of the wire underneath wasn’t as wide as the bottom. 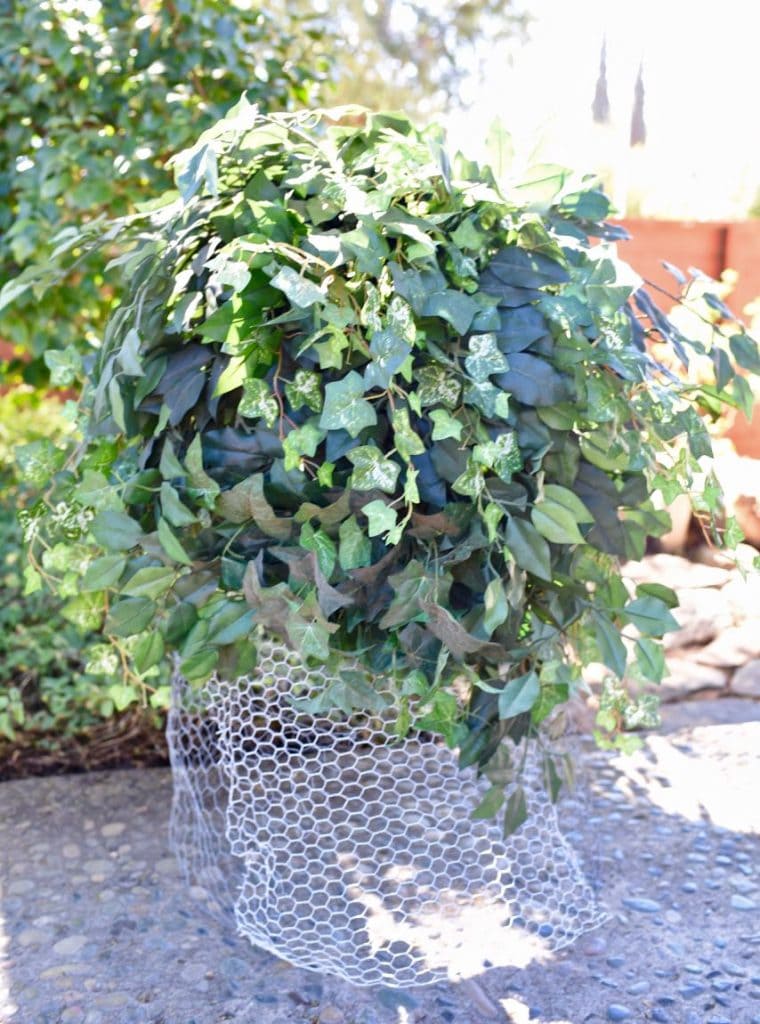 Just keep weaving in those leaves and filling in the gaps, and you’ll have a bush full of leaves before you know it!

Have the person get inside the costume at some point and scoot some of the leaves around to make two openings so the person inside can see out and know where they are going.

In Fortnite, the bush has brown pads on the legs.  I bought a pair of used mai tai pads for this and gave them a few coats of brown spray paint.  Here’s what they looked like before… 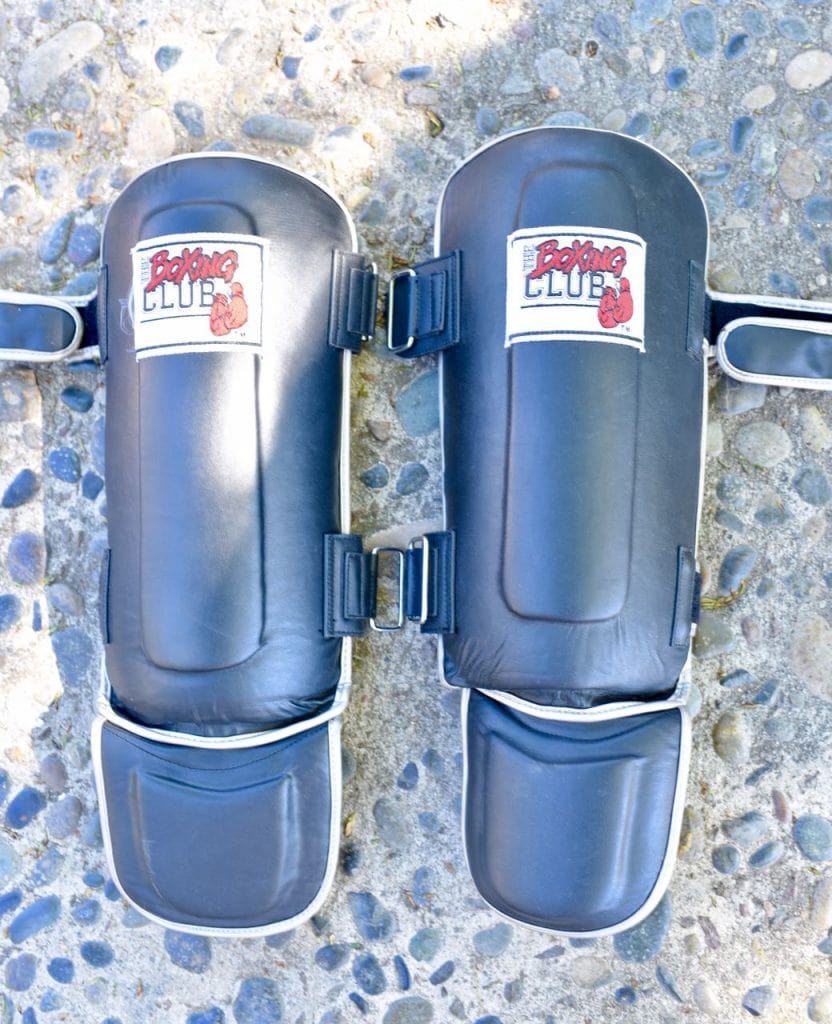 Shin guards would also work, as would just plain old cardboard cut into pad shapes.  You could also skip this part all together.

The Fortnite bush also carries a pick axe, but having my son disguised as a bush walking around with a pick axe didn’t seem like the best idea, so we skipped that part.

Now you see him… 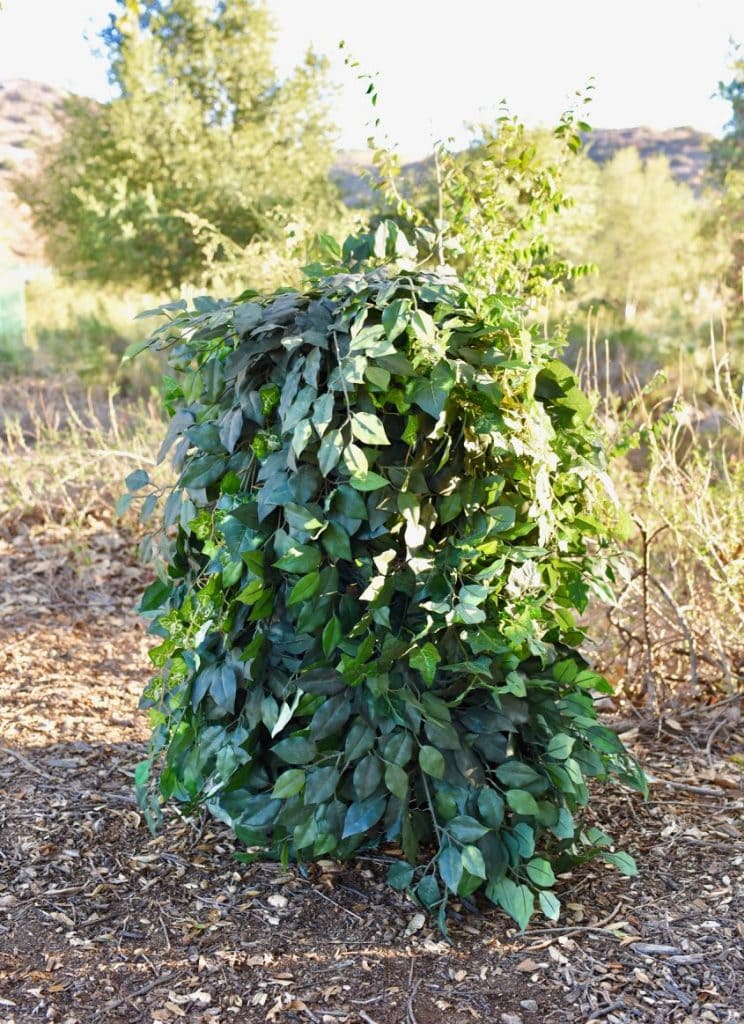 Here’s a few more for you.  These were too much fun to photograph so I might have gone overboard… 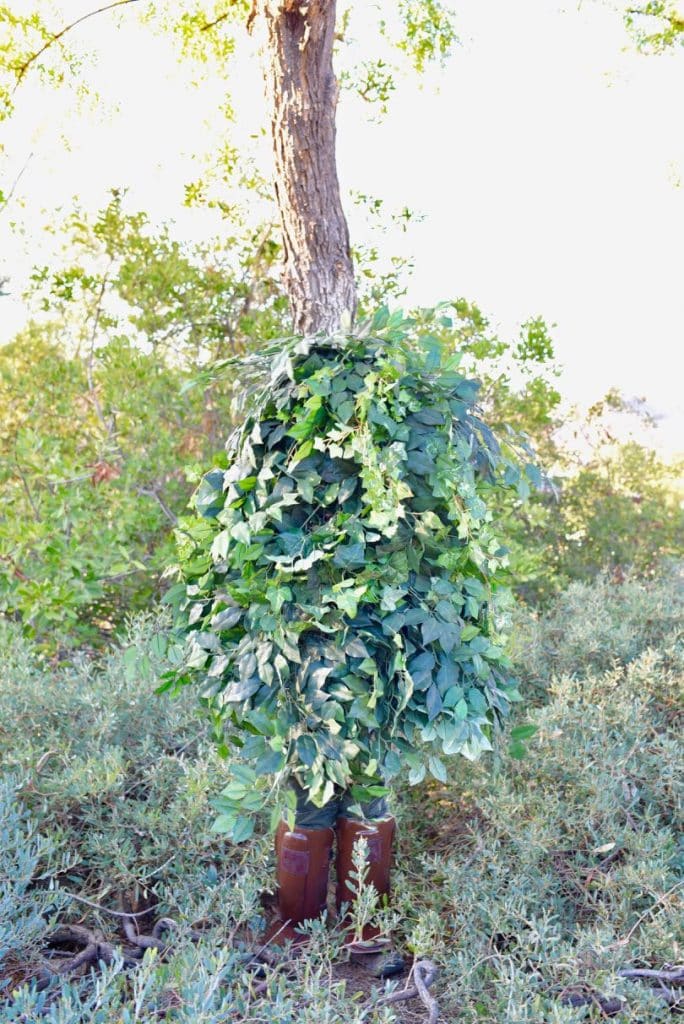 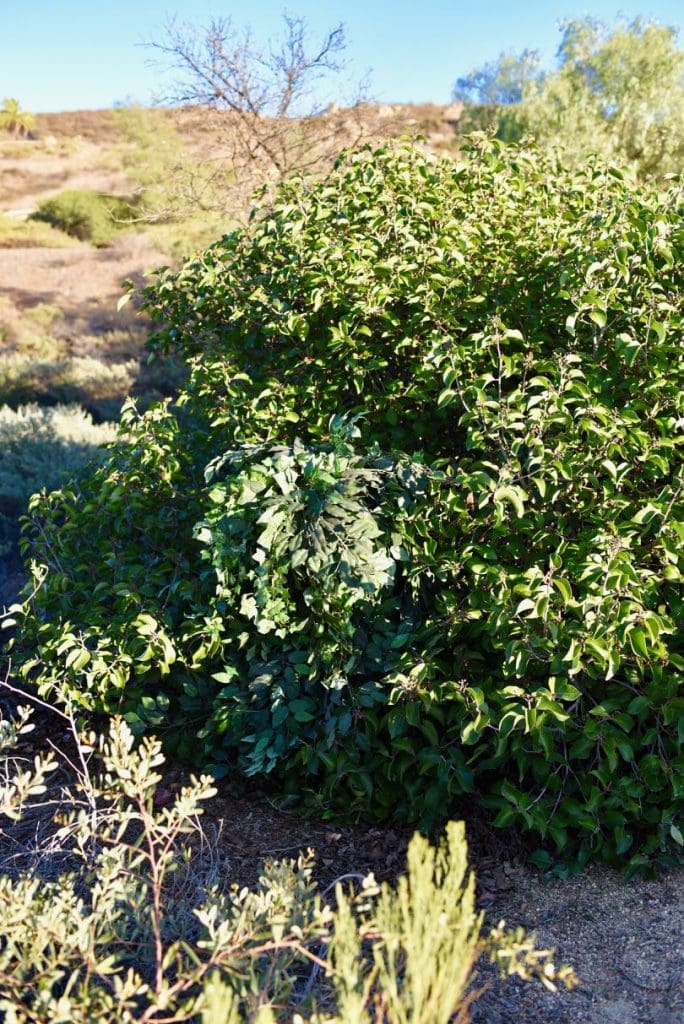 His Fortnite bush costume blended RIGHT in with these bushes. 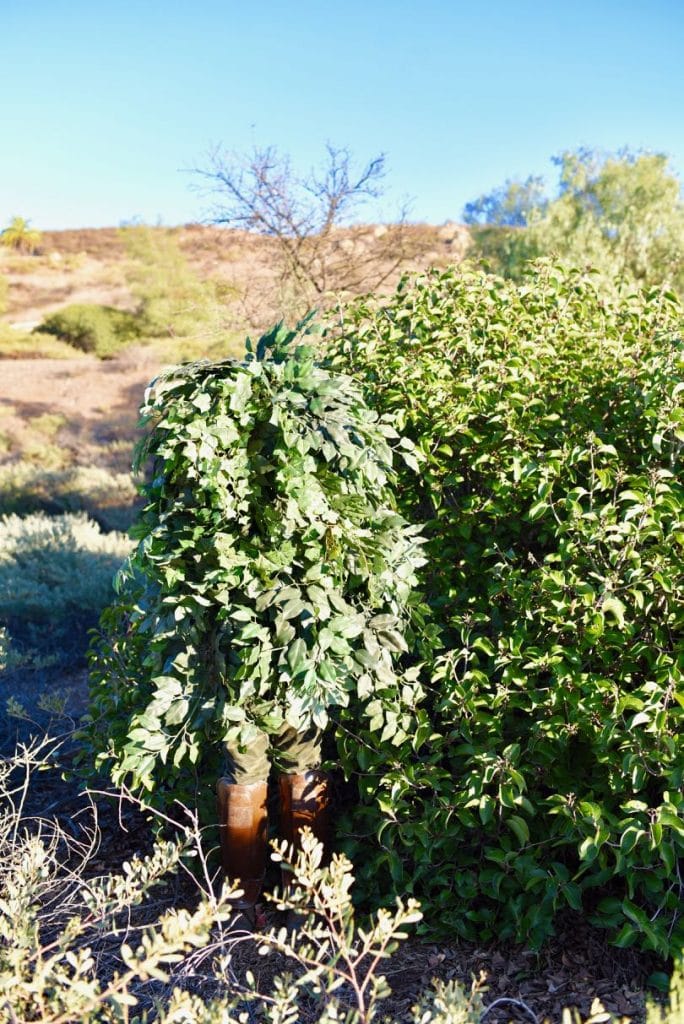 I’m so happy with how my son’s Fortnite Halloween costume turned out!

When my son and teen daughter saw it, they both couldn’t wipe the smiles off their faces.  They kept saying how real it looked and how the costume looked just like the bush in Fortnite, which I consider a total win!

This is a great Fortnite costume for kids, teens, and adults for Halloween, cosplay, or just for fun.  My son just wore it yesterday and practically everyone who saw him smiled and commented on his Fortnite costume.

What’s cool about this costume is that even people who don’t know anything about Fortnite still think it’s a cool costume, since it’s unique and is a costume they probably have never seen.

For someone who plays Fortnite, though, this bush costume is instantly recognizable.

Let me know if you have any questions and I’ll do my best to answer them.  I’m already brainstorming more Fortnite costumes for next year!

What is one of the Fortnite costumes you’d like to wear?