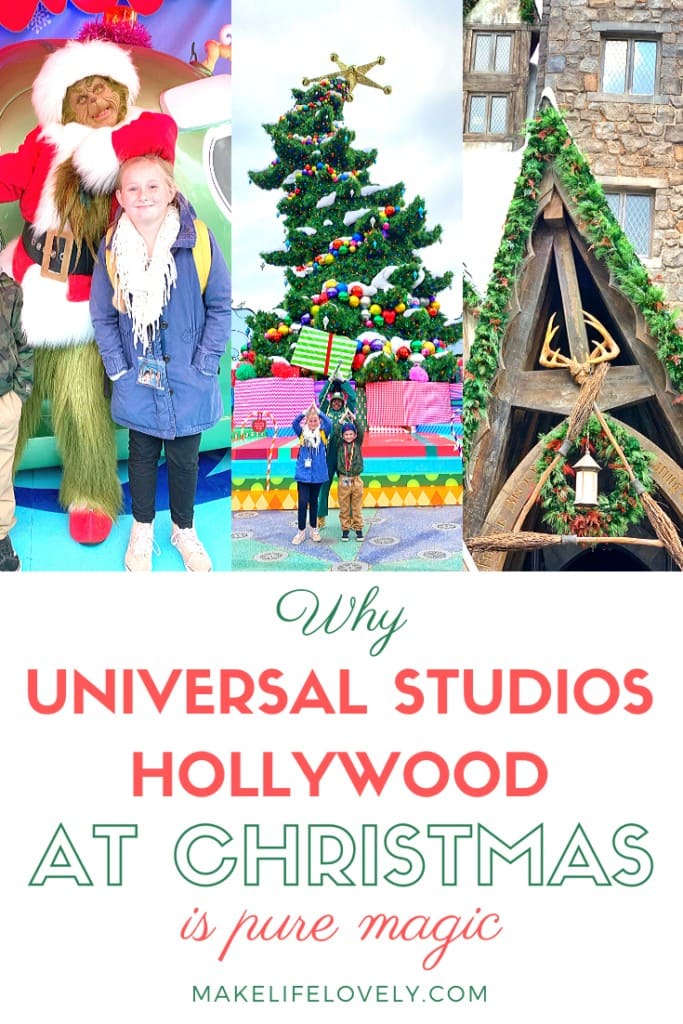 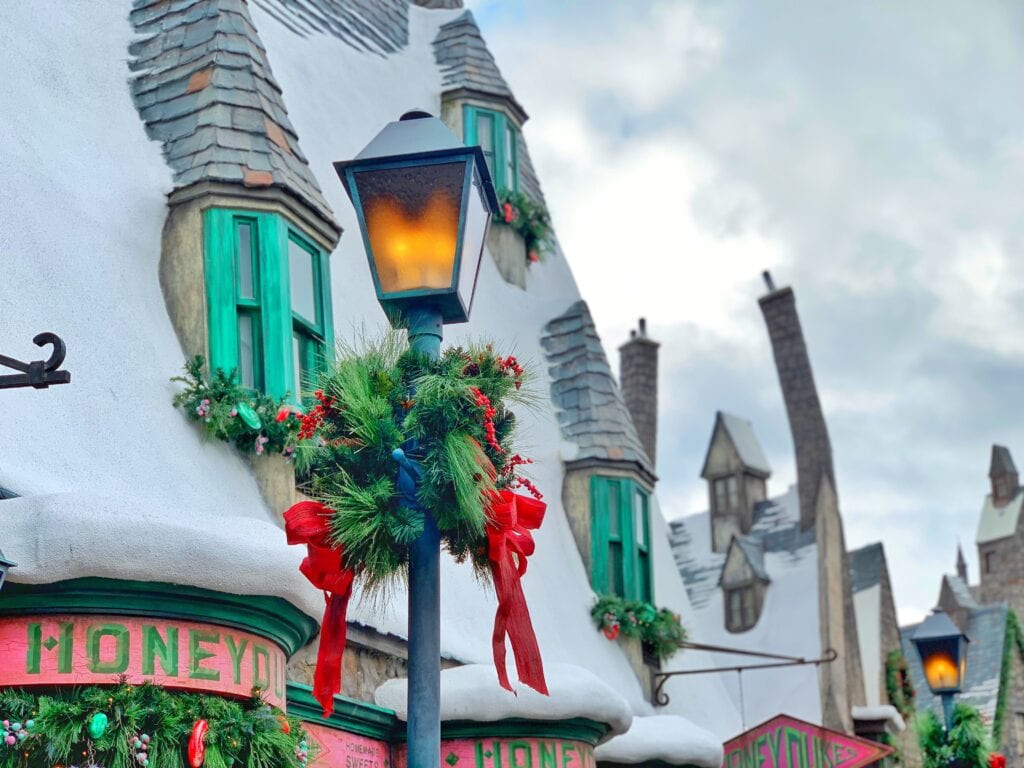 Christmas in the Wizarding World

The quaint, cozy village of Hogsmeade is the perfect palette for Christmas cheer with its’ snow-capped roofs and inviting window fronts. 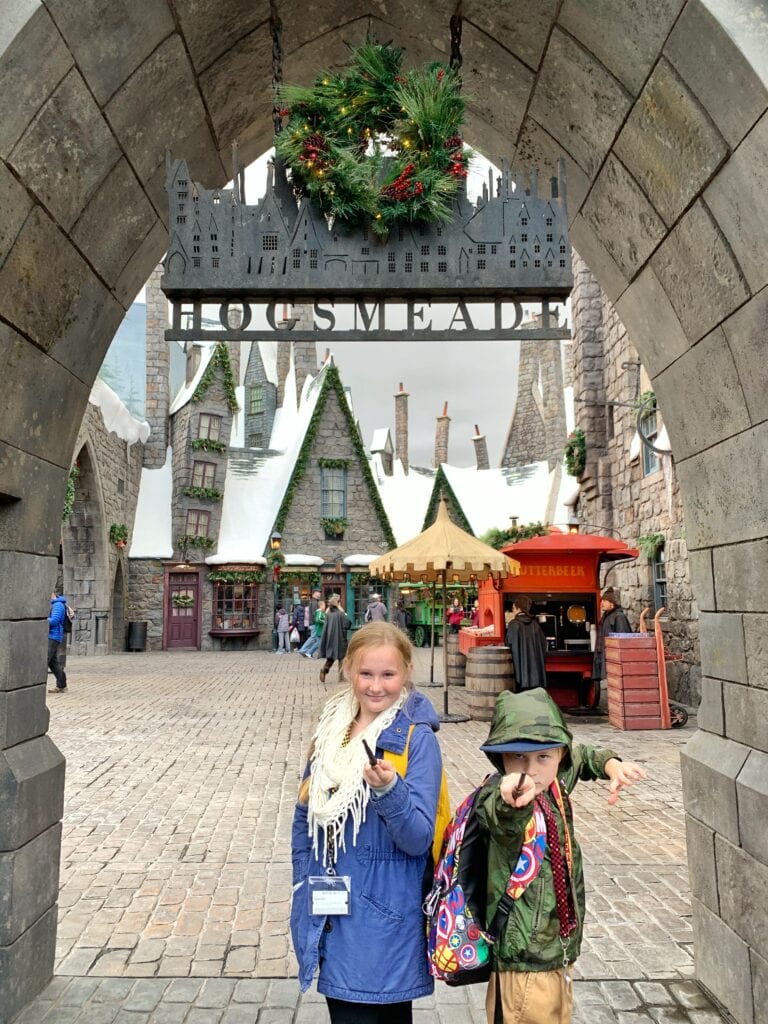 Add some Christmas cheer and the charm of this area of the park is simple irresistible!

Seasonal Decor to Match Each Store

Unique greenery, garlands, and wreaths all adorn each storefront in Hogsmeade.  What’s so special about the decorations is that each one is designed specifically for that store. 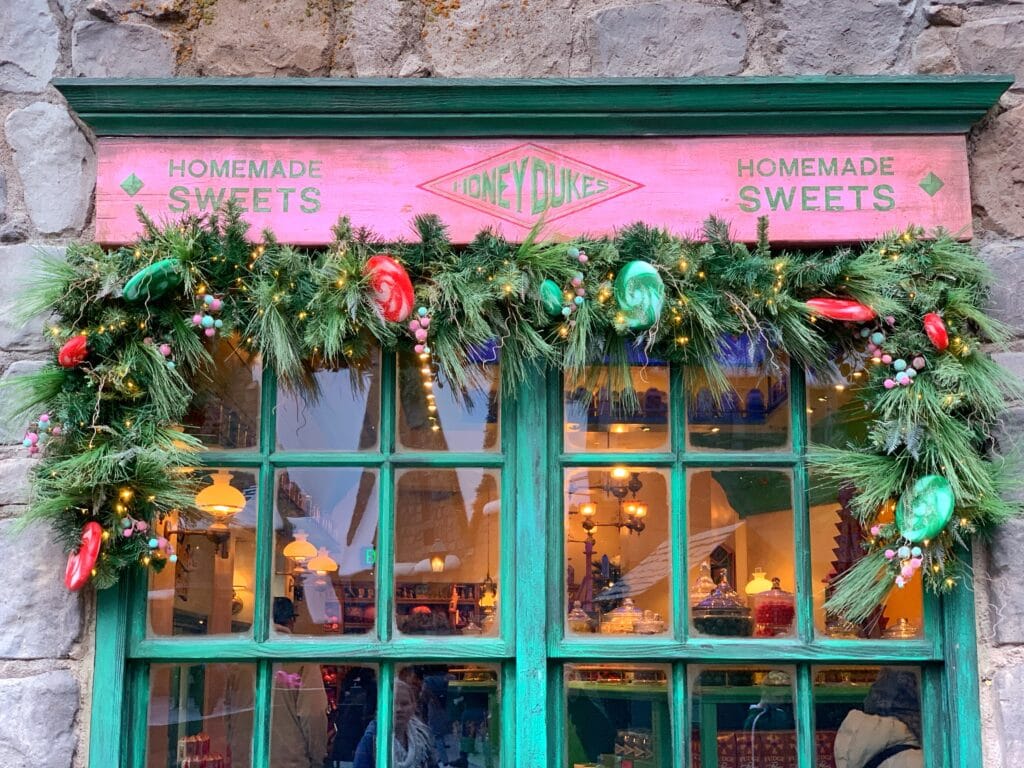 At Honeydukes you’ll find giant colorful lollipops and candies mixed in with the decorations to represent the multitude of sweets that you will find inside. 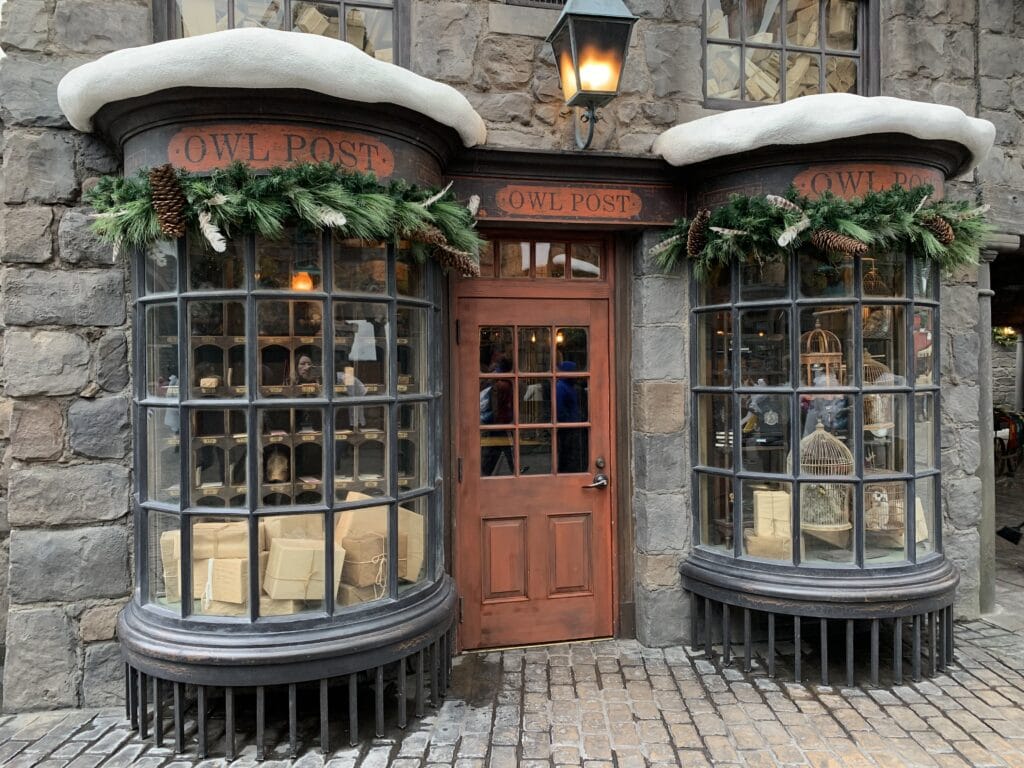 The Owl Post is adorned with feathers, representative of the owls that deliver the parcels in the Wizarding World.  Each store puts its’ own unique spin on the Christmas decorations and it’s fun to take it all in.

Get a taste of a traditional English holiday dinner at The Three Broomsticks for a limited time during Universal Studios Hollywood Christmas. 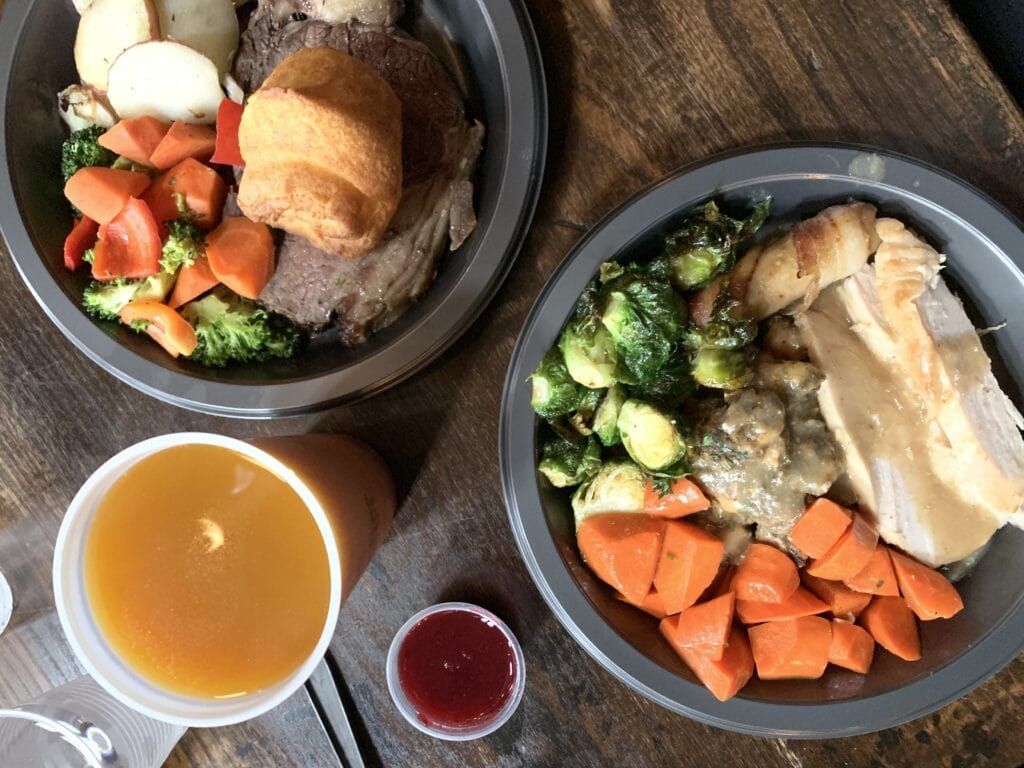 My tasty dinner included delicious moist turkey with gravy, a bacon-wrapped sausage, stuffing, glazed carrots, and brussel sprouts.  Yum!  Of course I indulged in my favorite pumpkin juice while the rest of the family had their favorite butterbeer.

The Magic of Christmas at Hogwarts™ Castle

Every night during the holiday season, Hogwarts Castle is illuminated with animated images and impressive lights that move to the beloved music of the Harry Potter movies. This show is lots of fun and great for kids!

Be sure to head over to the castle once it’s dark.  The shows ran every half hour in the evening when we were there, but definitely check the schedule when you get there.

Even the Hogwarts a capella Frog Choir and their giant frogs get in on the holiday spirit with their harmonized holiday songs! 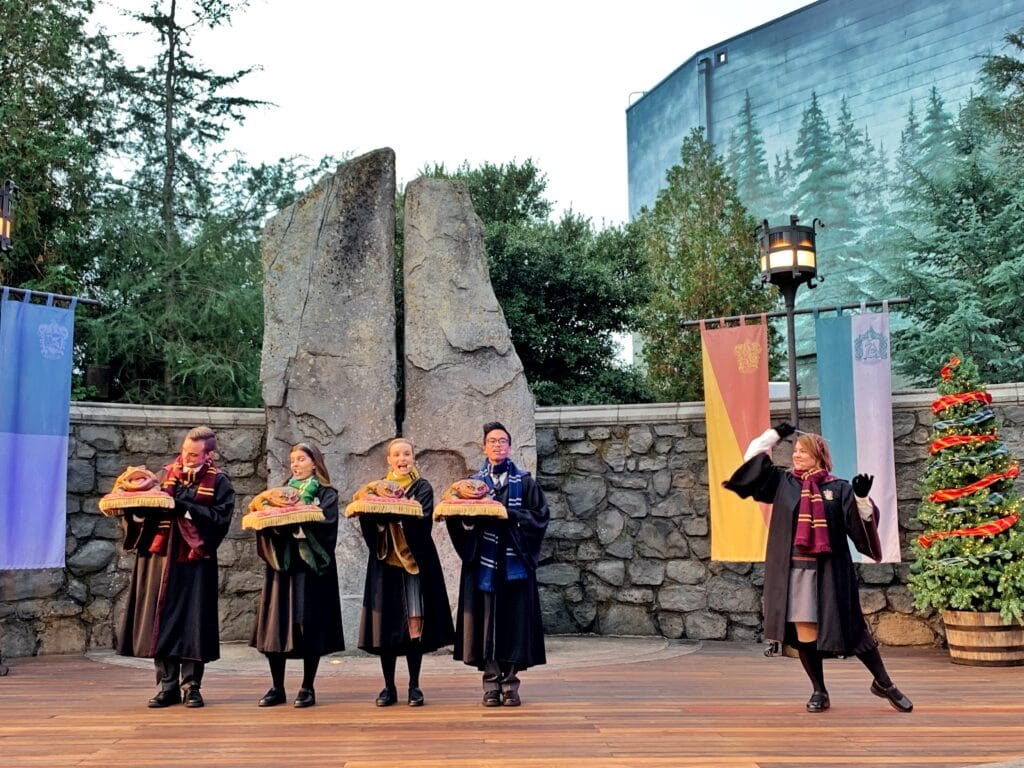 You can hear them perform throughout the day in the Wizarding World of Harry Potter.

While you’re at Hogsmeade you can pick up some special custom ornaments that can only be found in the Wizarding World of Harry Potter for Universal Studios Hollywood Christmas. 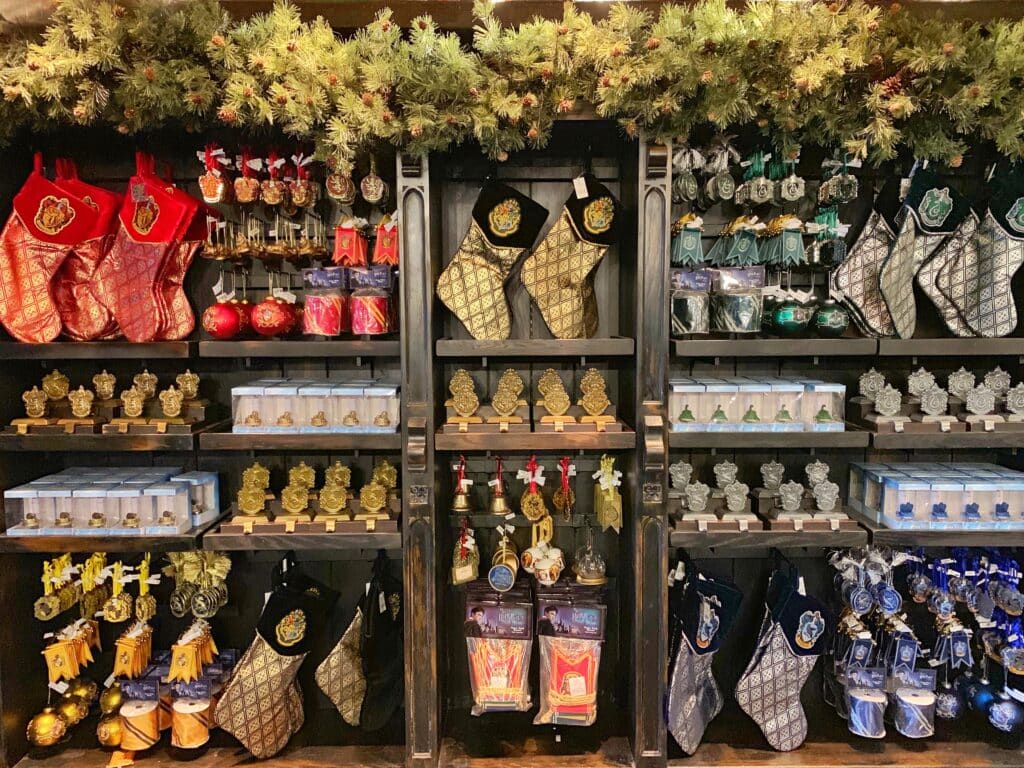 I’ll wasn’t quite sure what to expect in Who-ville and the Grinchmas area, but waiting there was some major Christmas eye candy in the form of whimsical decorations, a gigantic topsy turvy Christmas tree, Who-ville residents in all different shapes and sizes, and even the Grinch and his faithful sidekick Max!

Meeting the Grinch and Max

Meeting the grumpy Grinch was absolutely one of the highlights of my kids’ day.  He was sarcastic and sassy and oh so Grinchy, all while joking with the kids and having fun with them.  He looked like he walked straight off the movie set.  His hair, his face, his eyes- everything screamed Grinch!  He is there for a limited time during Universal Studios Hollywood Christmas and is definitely worth waiting in line for. 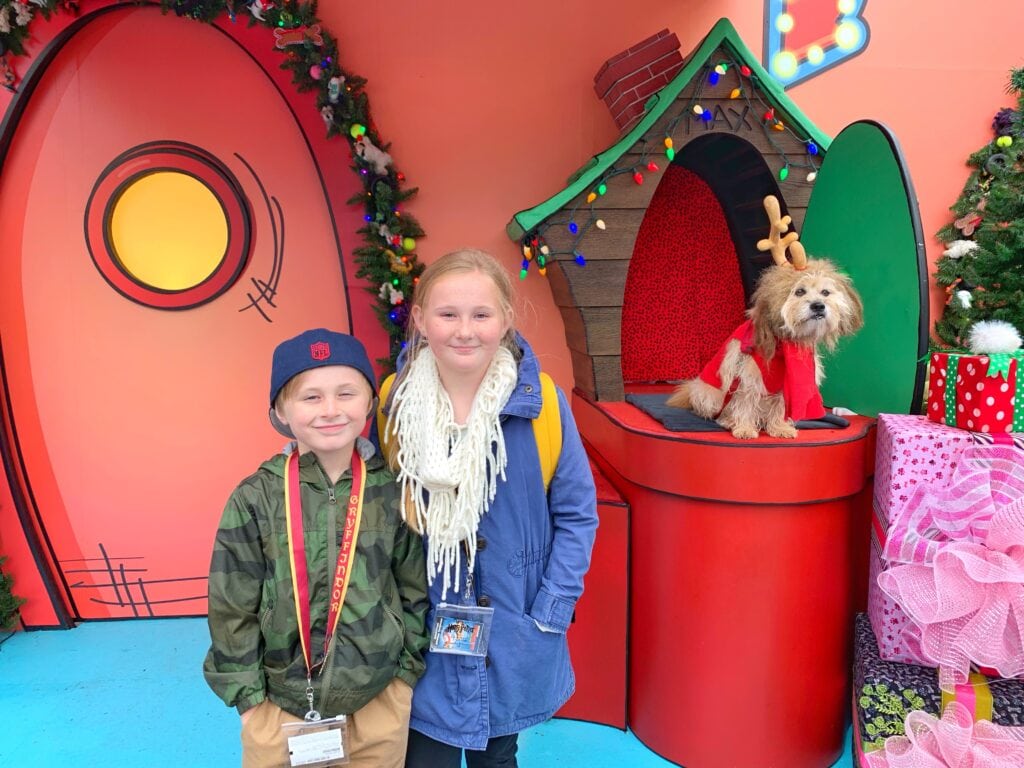 And let’s not forget sweet Max.  He was there too, complete with his little reindeer antlers gifted by the Grinch, ready to take pictures with his loving admirers.

Meet the Residents of Who-ville 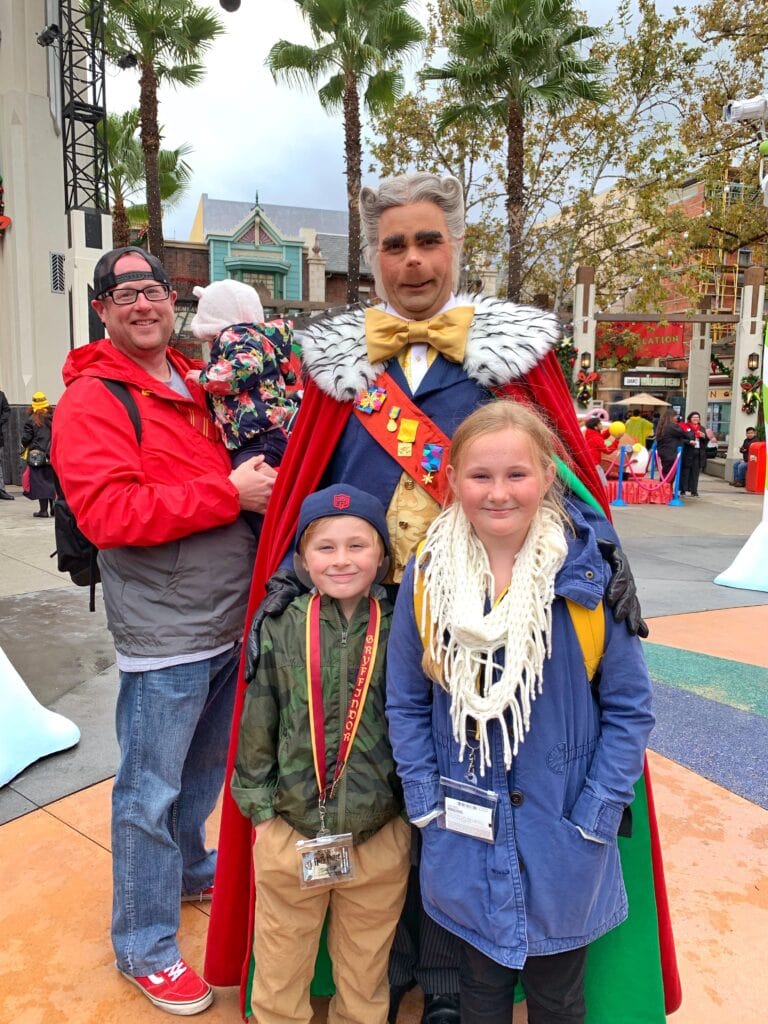 The mayor of Who-ville was a total riot.  He was hilarious and pompous and just perfect!  He had us laughing so hard and the kids loved joking with him and listening to his stories. 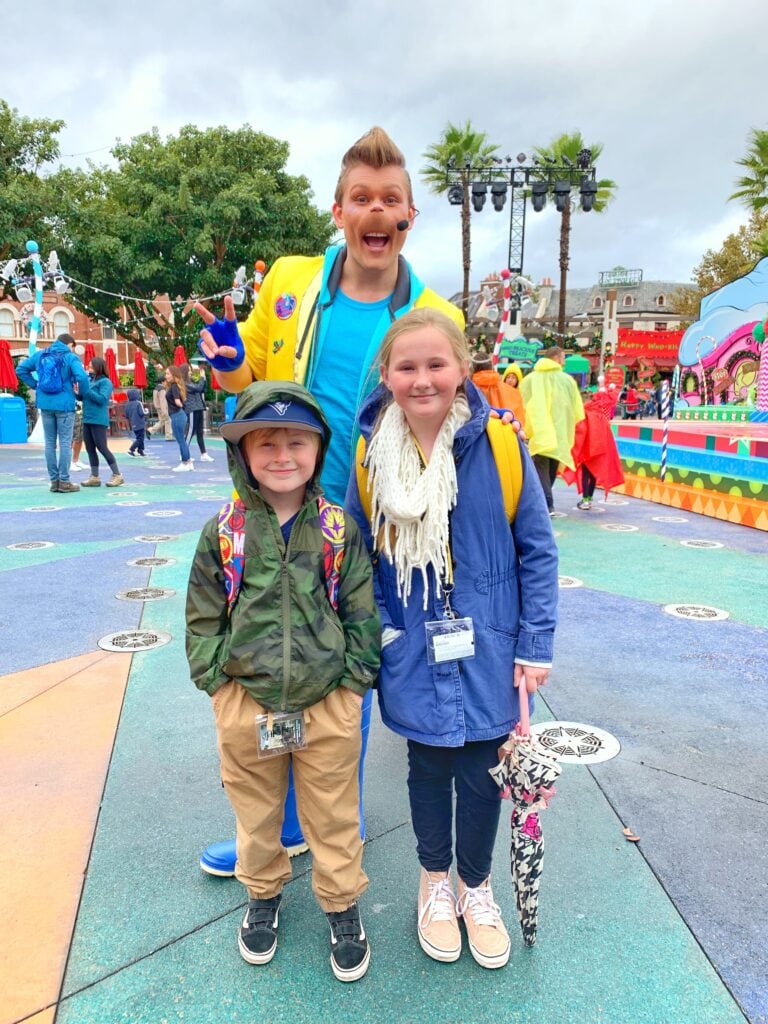 The Whos are out in full force at Universal Studios Hollywood in Who-ville, which is perfect for Grinchmas visitors.  Every time we turned around there was a brand new Who-ville resident there to talk to and take pictures with, which was really great.

They were all very outgoing and fun and their makeup and faces were amazing.  My daughter even asked me how they did their faces so perfectly… “They look so real mom!”

The big vocal point in the area is the ginormous topsy turvy 55 foot tall Grinchmas tree. 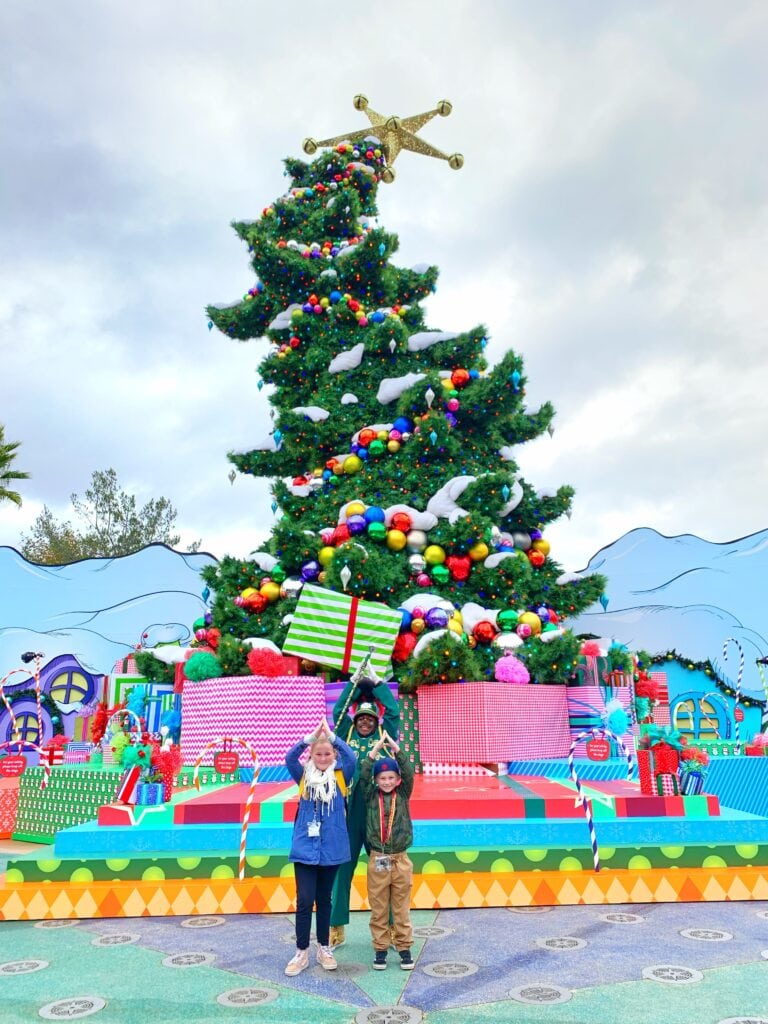 It sparkles and shines with hundreds of colorful ornaments and thousands of Christmas lights that are choreographed to music. The huge star on top was incredible and I’m still not sure how they made it so sparkly and beautiful!  A little Christmas magic perhaps? 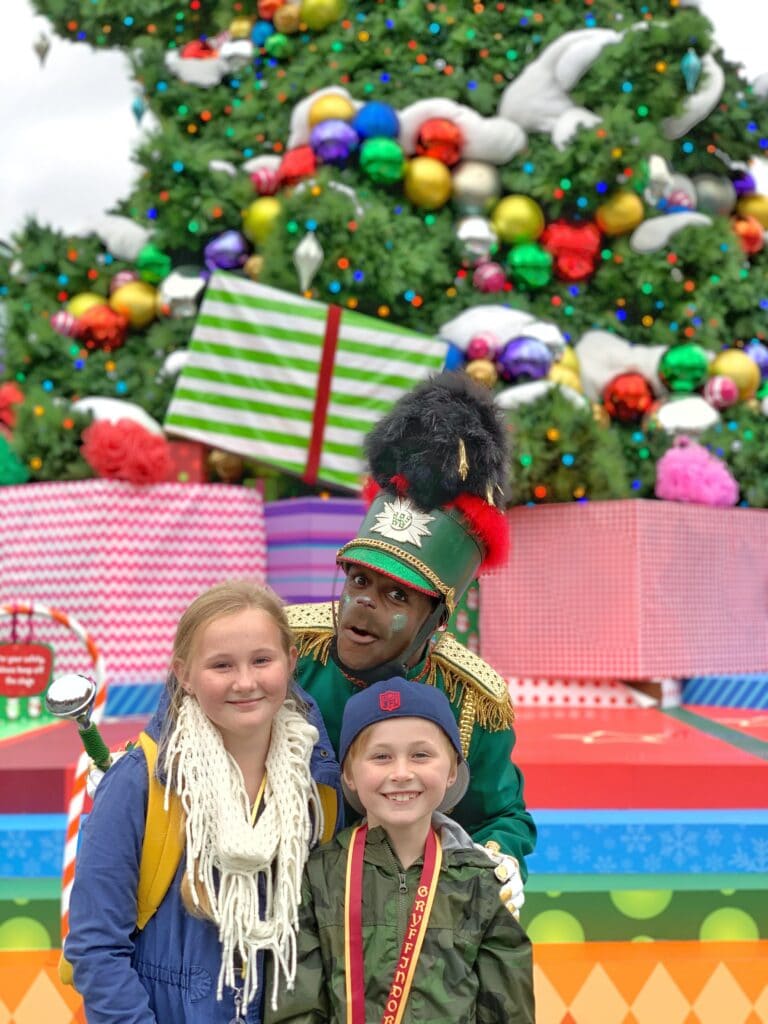 Multiple times each night, visitors can attend the tree lighting ceremony, which is accompanied by a rare snowfall in Los Angeles.  We happened to visit during a rare rainstorm, so the ceremony we had planned on attending was postponed until the rain stopped. 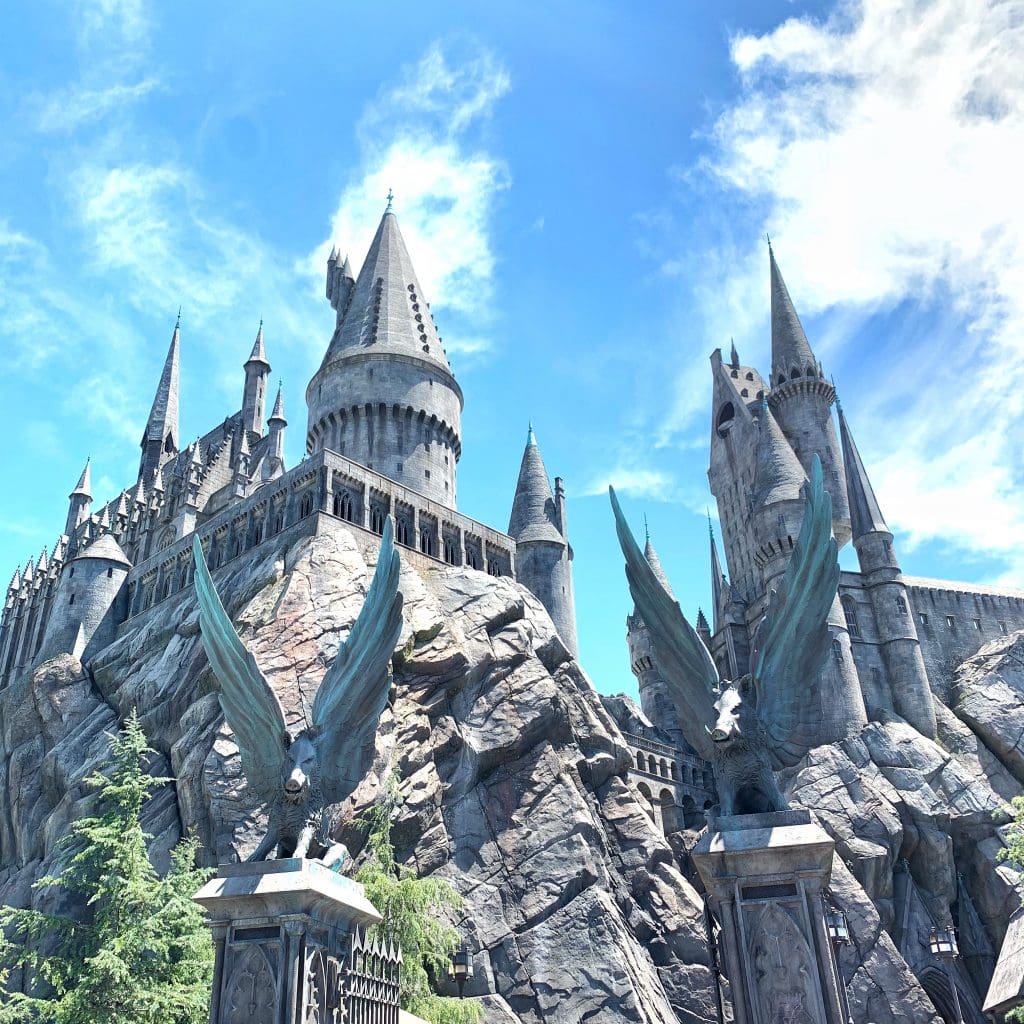 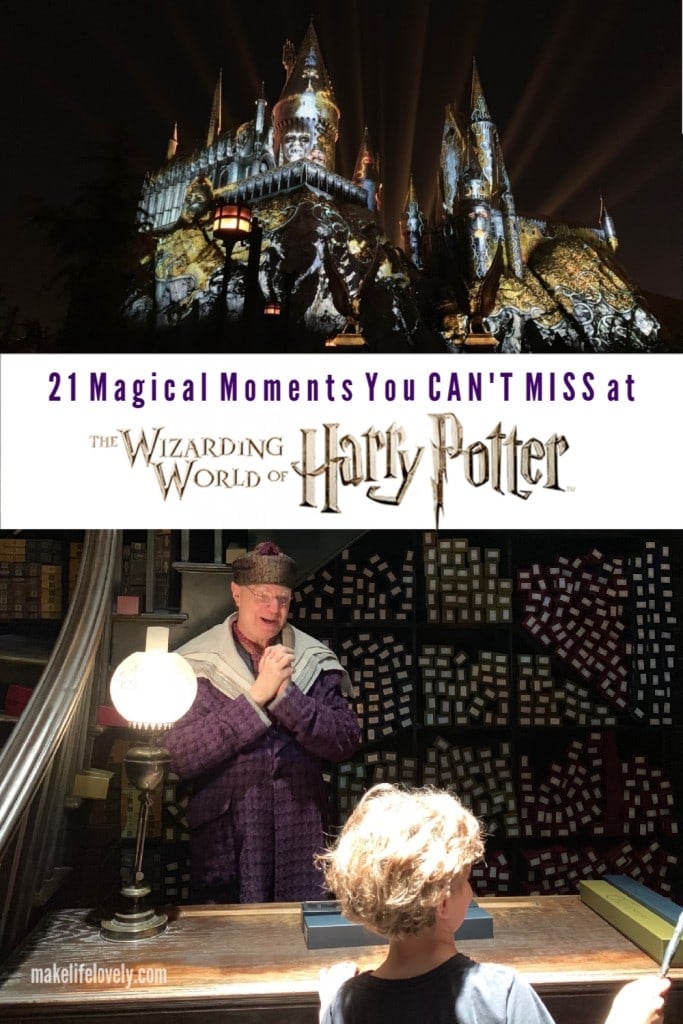 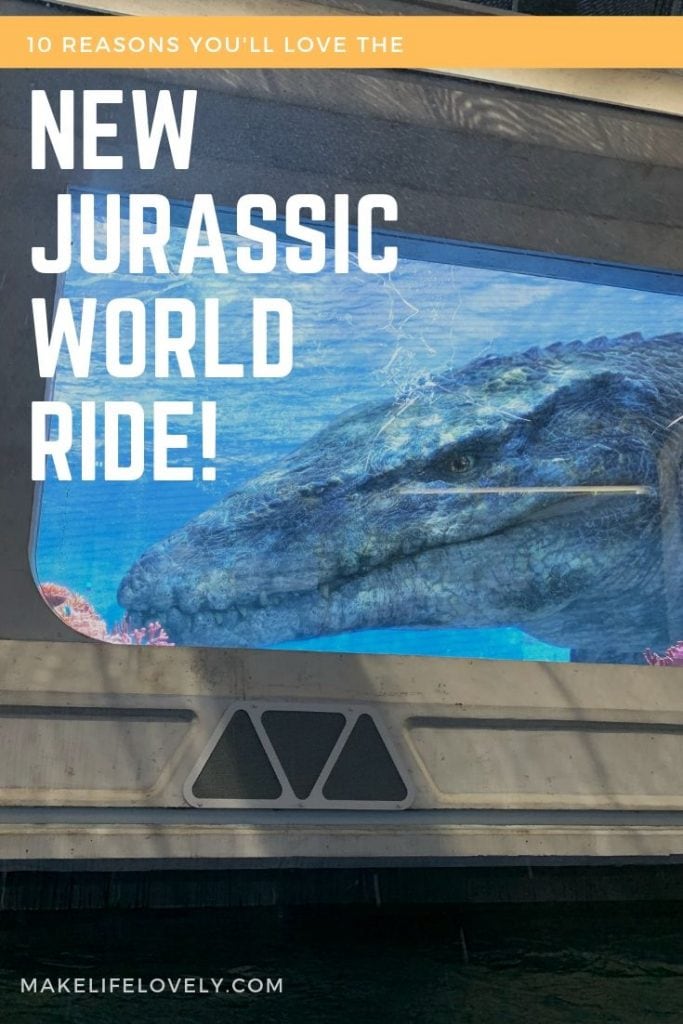 And if you’ve got a dinosaur lover in your group, be sure to check out the 10 Reasons Why You’ll Love the New Jurassic World- The Ride.  The new ride is so much fun and there are some new features in the area you should be aware of before visiting. 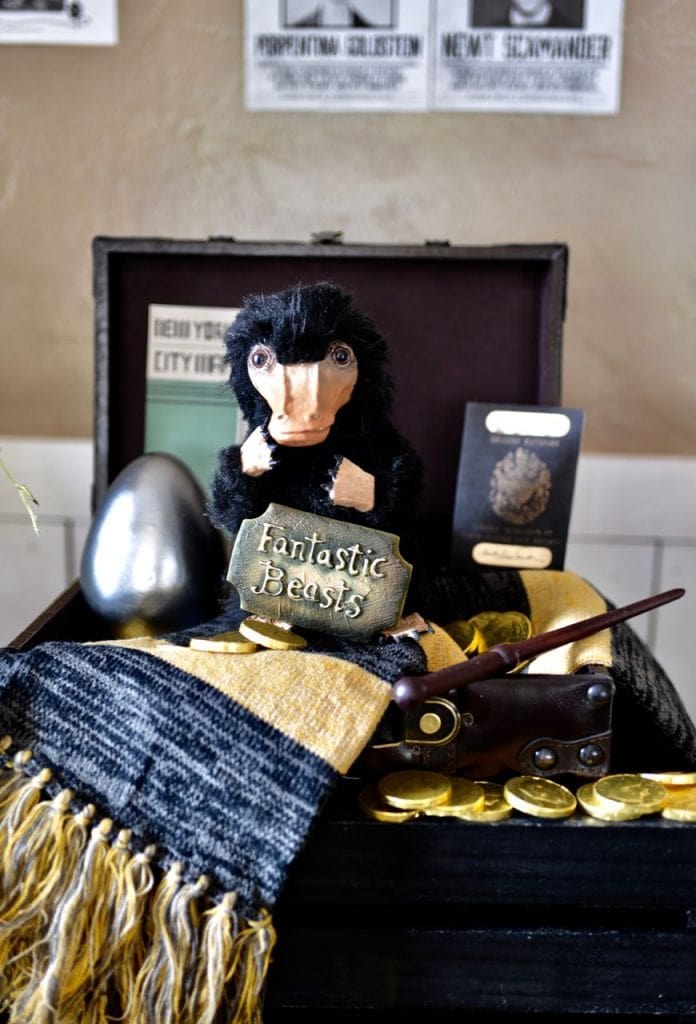 If you love Harry Potter as much as I do, then you’ll love our Fantastic Beasts party!  I’ve got an amazing Harry Potter party I put together coming soon, as well as a Harry Potter Christmas tree and DIY ornaments you won’t believe. 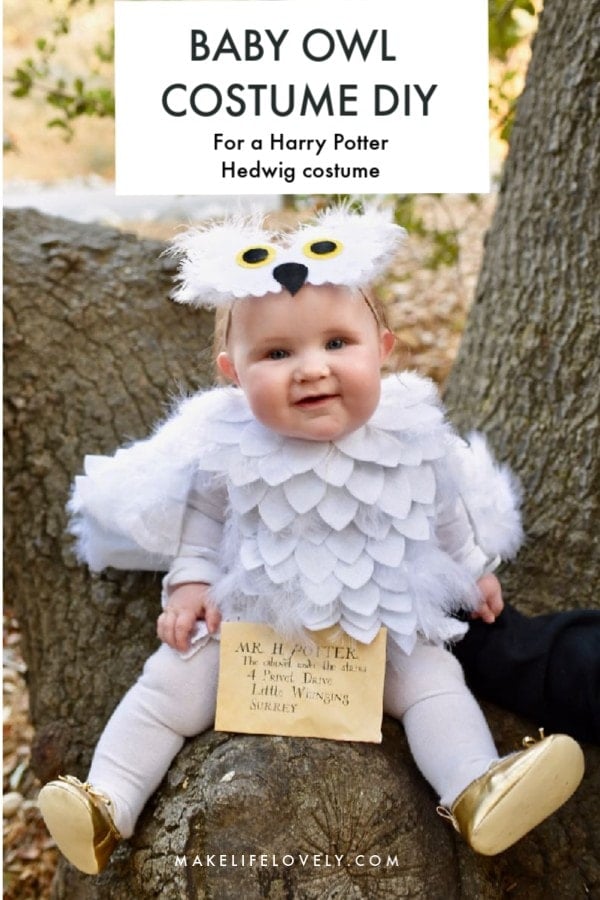 If you’re planning ahead for Halloween and need a Harry Potter themed baby or toddler costume, you’ll love this Hedwig Baby Owl Costume DIY  that is no-sew that I created for our daughter.

Have a very merry Christmas!