Create the ultimate pirate DIY treasure chest that looks amazingly realistic and is full of treasure! You won’t believe this pirate treasure chest started out as a cheap plastic chest.

Aarrrggghhhh mateys, I’ve always had a thing for pirates. I seriously went through a phase where every Halloween all I wanted to dress up as was a pirate! 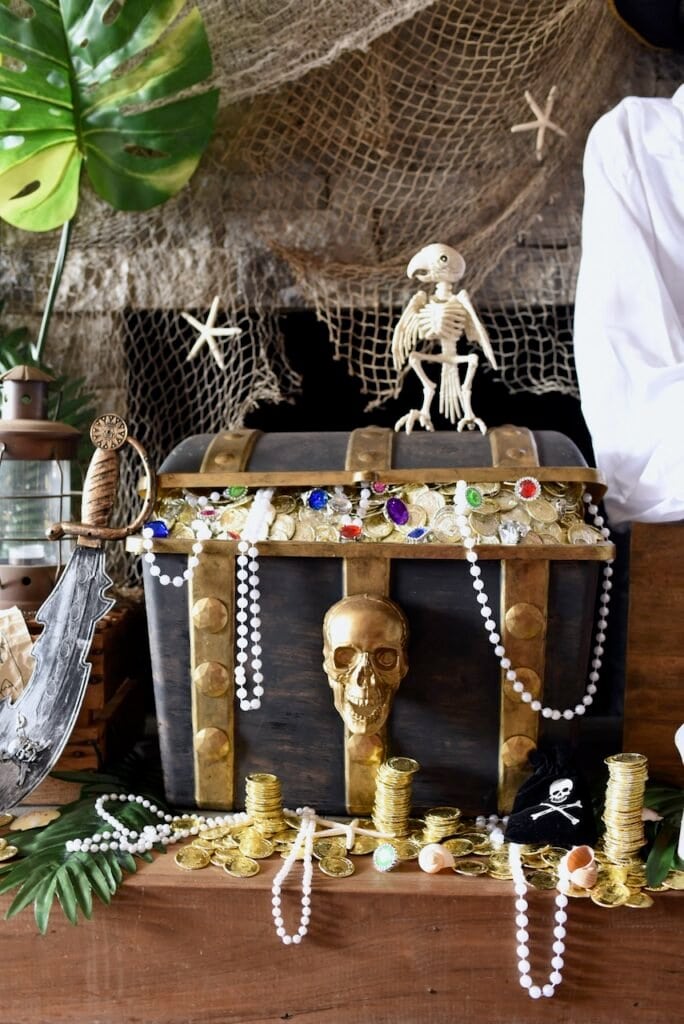 This DIY treasure chest, though, has got to be my favorite. 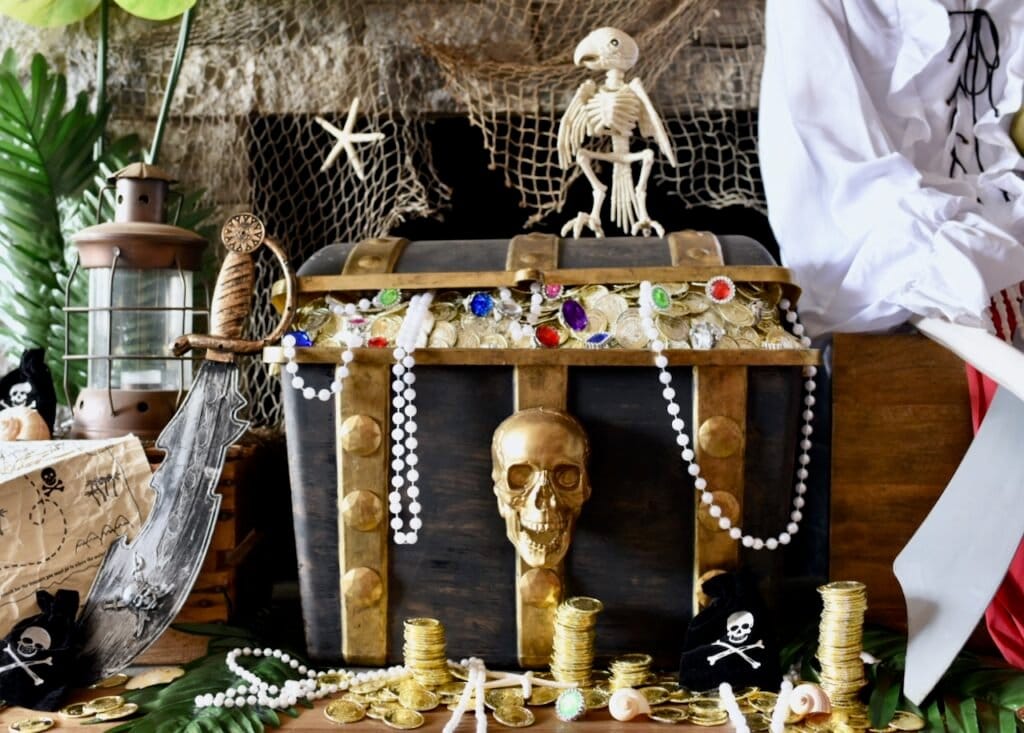 An aged gold skull and faux gold metal details add to the sea-weathered look of the pirate chest.

This treasure chest looks like it was pulled up straight out of Davey Jones’ locker!

Keep reading to see exactly how you can make your own realistic pirate treasure chest from a basic plastic chest.

If you like makeover crafts like this, you’ll love our realistic-looking DIY Witch Cauldron made from a plain plastic cauldron!

Watch the DIY tutorial video I created below to see how I made this chest!

Then keep reading to get a list of supplies and see how to make the treasure chest DIY step-by-step.

This post contains Amazon affiliate links, which means I make a small percentage of any purchase made at no extra cost to you.

You could totally use plywood or a large cardboard box to make a DIY treasure chest, but I’m not a carpenter and wanted to keep it simple without an intricate build. 😉 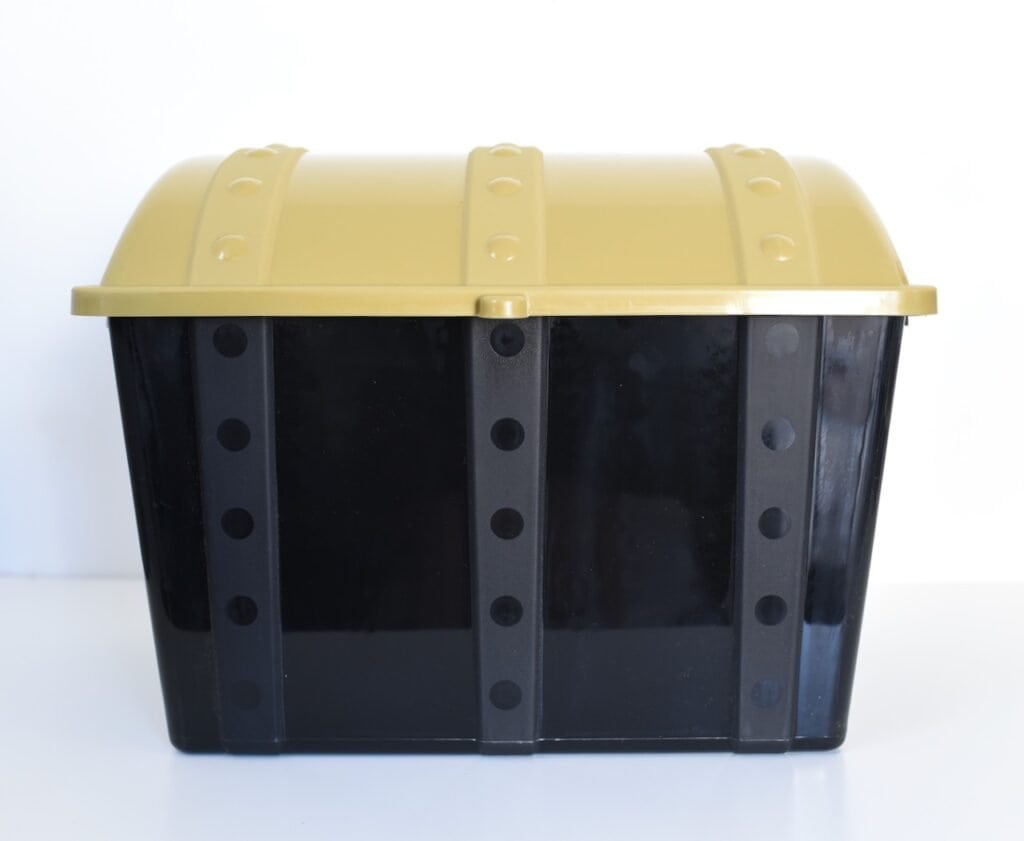 My easy solution was to use a plastic treasure chest that had a good shape to it, but looked too new and shiny and, well….. plastic-y.

I just couldn’t add treasure to a plastic chest, so that’s how this craft was born!

You could also start with a pre-made unfinished basic wood treasure chest from the craft store.

You’ll want some sandpaper to sand down the pirate chest so the paint sticks well to the plastic.

I used 100 grit since it’s what I had on hand and it worked great.

Don’t skip this step or the paint won’t stick well!

These adhesive round rhinestones will be glued to the strips going down the treasure chest that will look like metal pieces.

The rhinestones will look like they are fasteners or large nails to hold the strips in place. 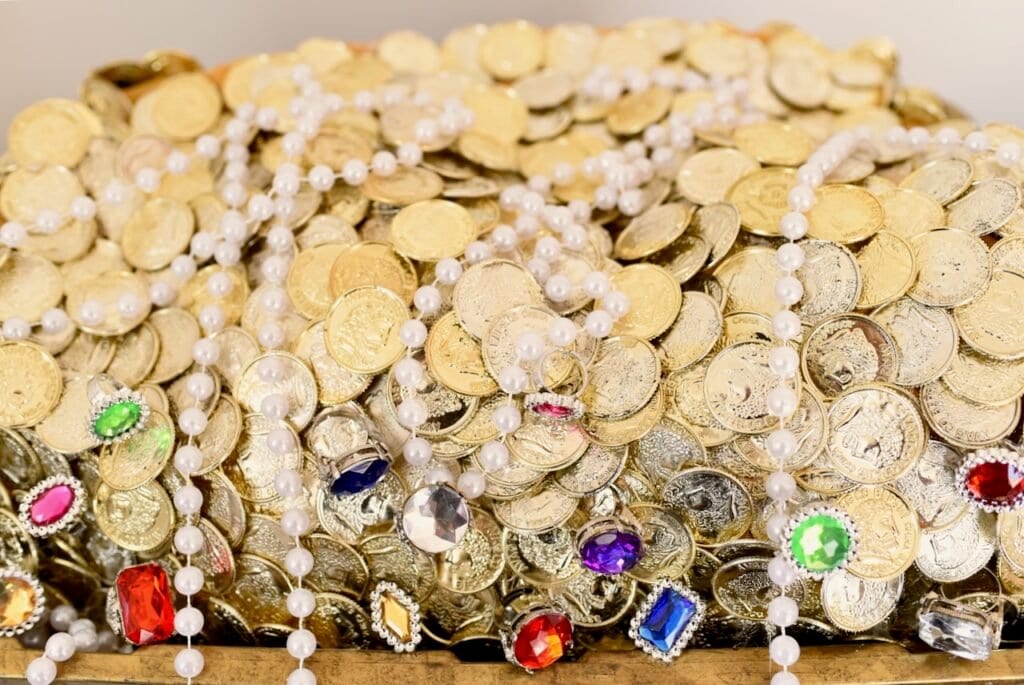 It just wouldn’t be a treasure chest without a lot of pirate booty, now would it?

Here’s what I used:

Hot glue will be used to adhere the rhinestones, the skull, and all the gold coins and pirate booty.

Make sure you have enough glue sticks too!

This one is optional, but looks really cool!

I cut and painted a small skull and added it to the front of my pirate chest. I love the detail it adds!

Tip: You could also add crossbones as well if you had small enough bones (which I didn’t).

Before you start painting you need to use sandpaper to sand all the sides of the treasure chest, as well as the lid. 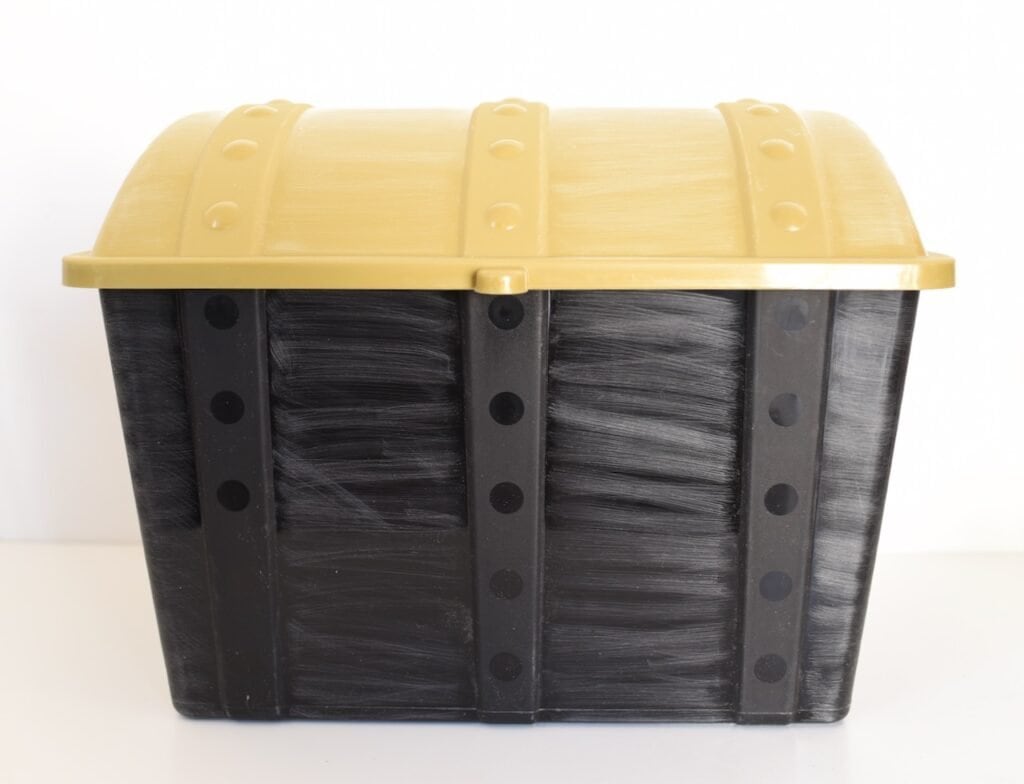 I didn’t sand the strips going down the lid and down the front of the chest.

Sanding will create ridges and rough up the plastic a bit to help the paint stick better to the plastic surface.

It will also give the chest more of a weathered look, which is exactly what we are going for!

Be sure to do a quick wipe down of the trunk to remove the plastic residue left behind from the sanding.

Trunk Base and Lid

For the trunk base (which was black), I started with brown paint and used a crumpled up paper towel to paint back and forth across the whole thing. 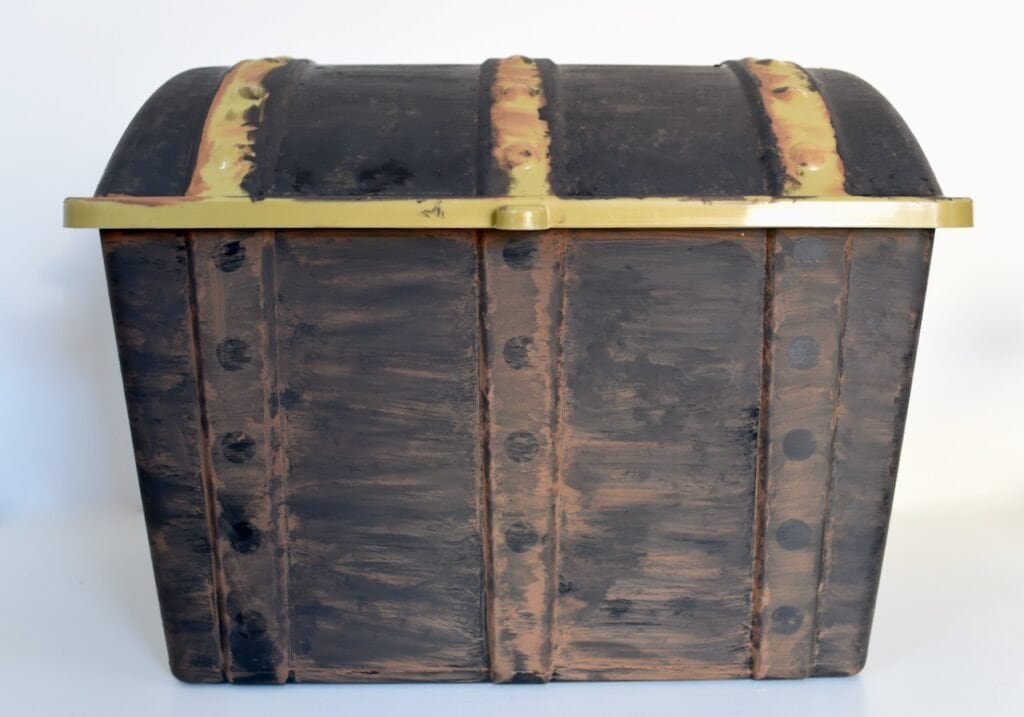 For the chest lid (which was yellow), I started with black paint and used a crumpled paper towel to paint back and forth across the whole top.

After the paint was dry, it looked pretty streaky, which I had anticipated.

I wanted to break up the streaks, so I took a piece of paper towel and dipped it into the black paint, then rubbed it across over the brown. 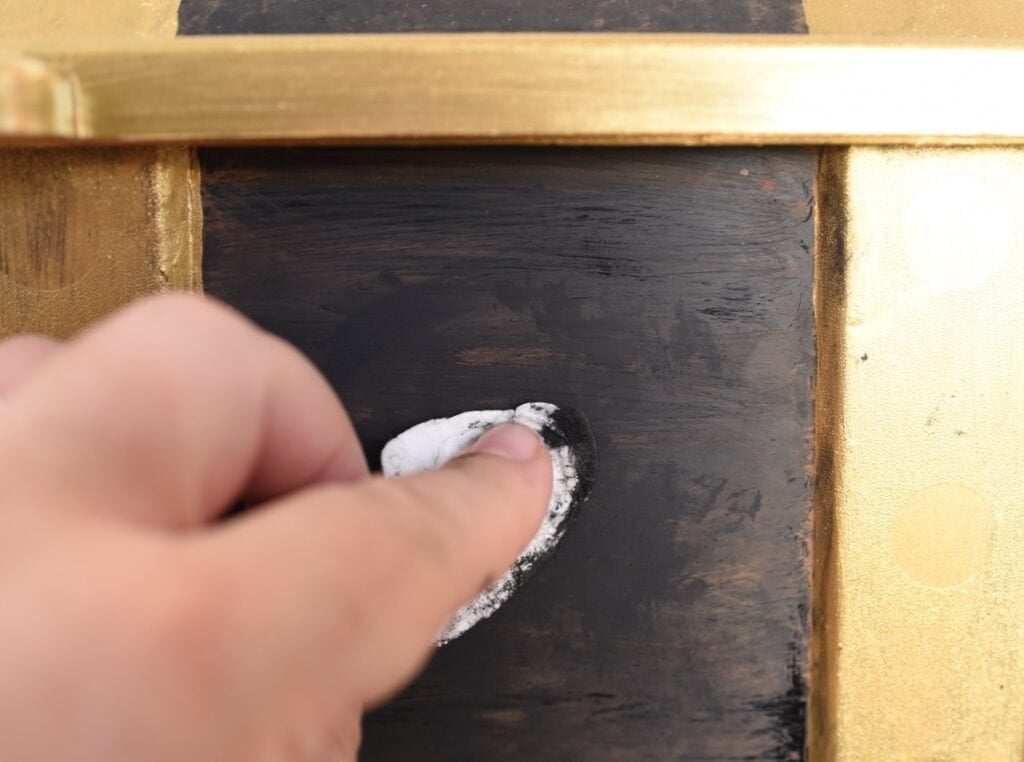 I also blotted it over the top to break up the brown streaks and give it more character and age.

I wanted the strips to that ran down the front and back of the chest and lid to look like metal. 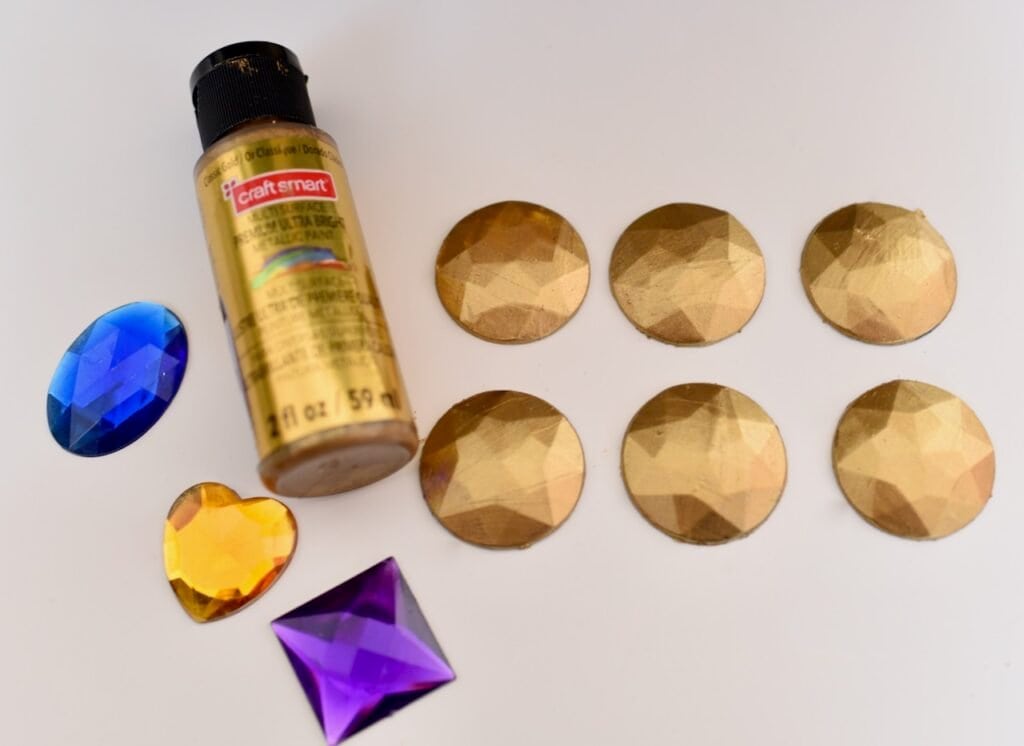 I used gold metallic craft paint to paint some round colored craft jewels to add more detail to the treasure chest.

After a couple coats of paint they looked great.

Hot glue was used to attach the jewels down the center of the strips going down the treasure chest. 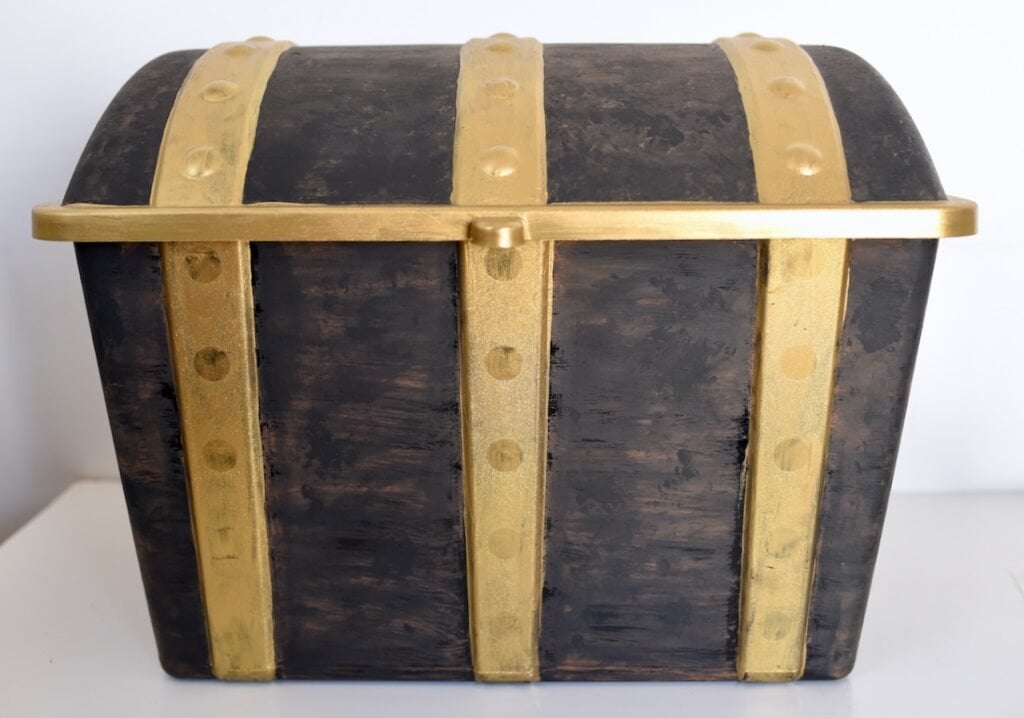 Next, I used an angled paintbrush to paint the strips gold.

The gold was a bit too shiny for me and didn’t look like an old treasure chest.

To weather the gold a bit I dabbed some black paint onto the trunk with a wadded up paper towel. 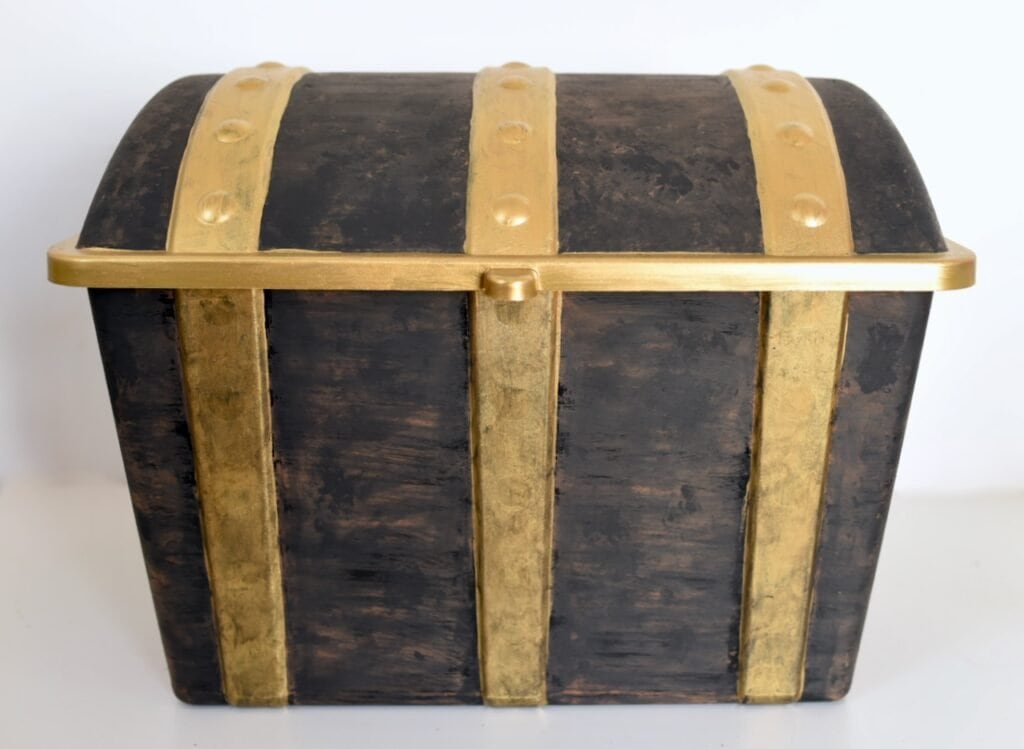 You can see in the photo above that the gold on the bottom of the trunk had been “aged” with black paint, while the gold on top had not been painted yet.

To make my DIY treasure chest look like it belonged to a real scurvy dog pirate, I cut the back half off of a small plastic skull. 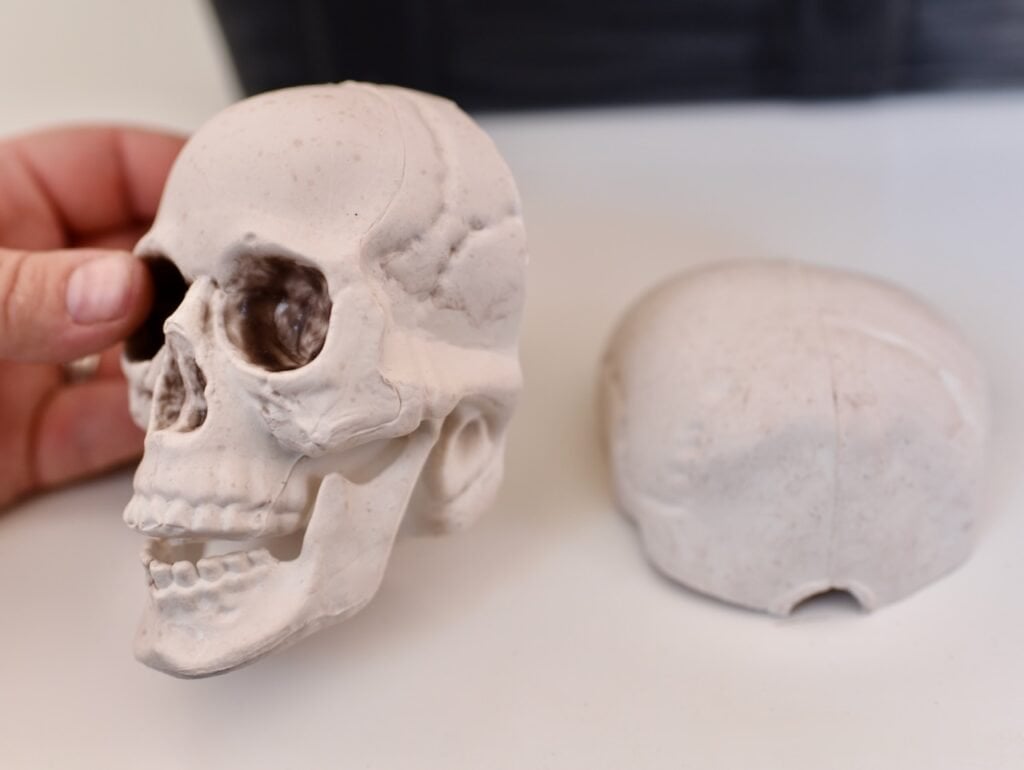 I painted two metallic gold coats of paint onto the skull and let it dry completely.

To age the skull a bit, I dabbed some black paint onto it with a wadded up paper towel, then dabbed some of the paint off.

I tried adding hot glue around the back of the skull to stick it onto the trunk, but there just wasn’t enough surface area with glue on it, so it quickly fell off.

Instead, I cut a piece of felt about 2″ wide, then glued both sides to the inside of the skull.

This gave me a band of felt that stretched across the back of the skull. 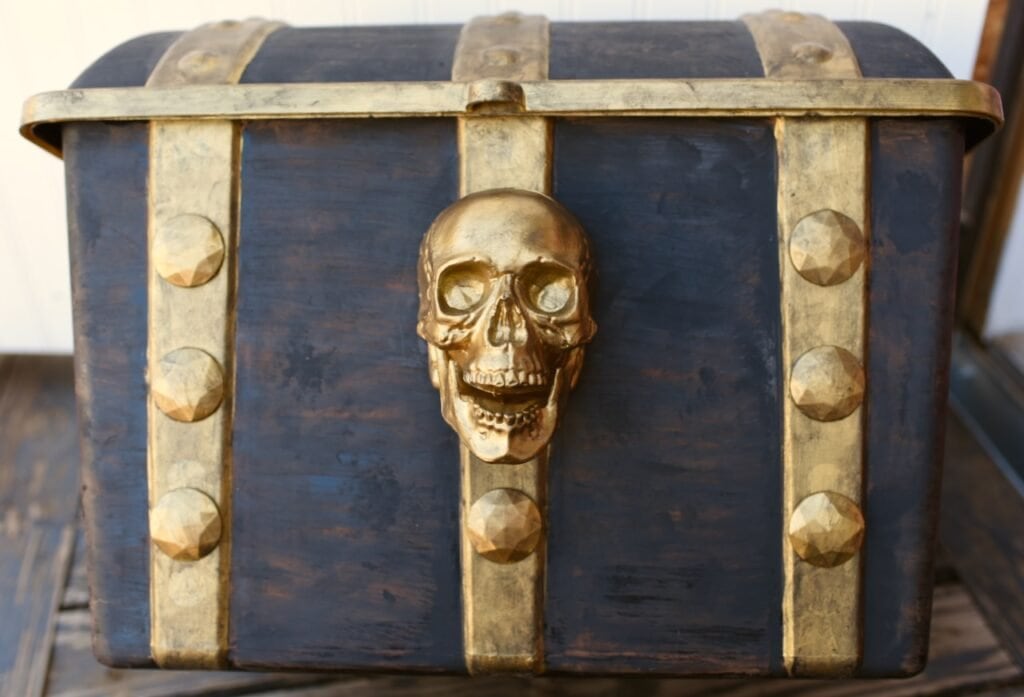 I added hot glue to that bend and pressed the skull onto the center of the trunk, where it now stuck perfectly!

Now for the really fun part- creating the pirate booty to fill the pirate treasure chest!

You are going to want a LOT of shiny gold coins for this part.

Trust me, you will need more than you think.

To create the illusion of a heaping trunk full of gold treasure, I started with a piece of gold fabric I already had on hand.

One by one, I used hot glue to attach gold coin after gold coin to the fabric.

I made sure to overlap the coins over each other so it looked natural, like the coins were really piled on top of each other.

Once I had a large area of the fabric filled, I added some stuffing to the inside of the treasure chest.

You can use newspaper, crumbled kraft paper, plastic bags, or anything else that will fill up space.

Next, I laid my gold coin-covered fabric over the top, then tucked in the sides to make it look like the coins were really stacked inside.

I hung pearl necklaces inside over the coins and made sure they hung over the side at varying lengths.

It took just a dab of hot glue to make them stick to the gold coins. 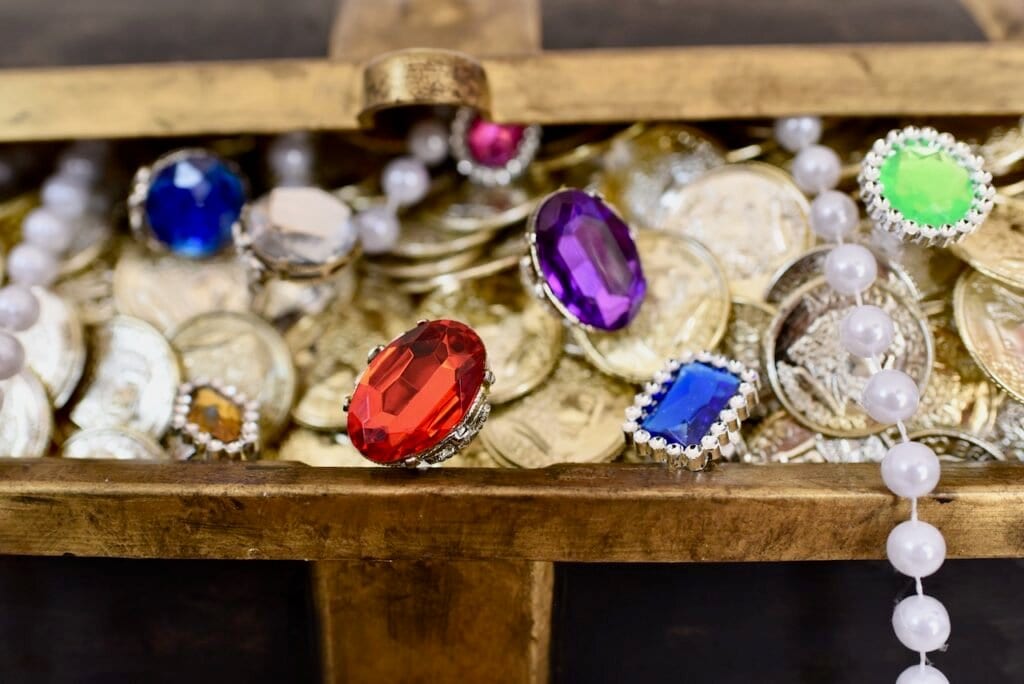 Next, I placed some kids rings with fake jewels on them all across the gold, making sure to mix up the colors.

The rings were attached to the coins with a little hot glue. 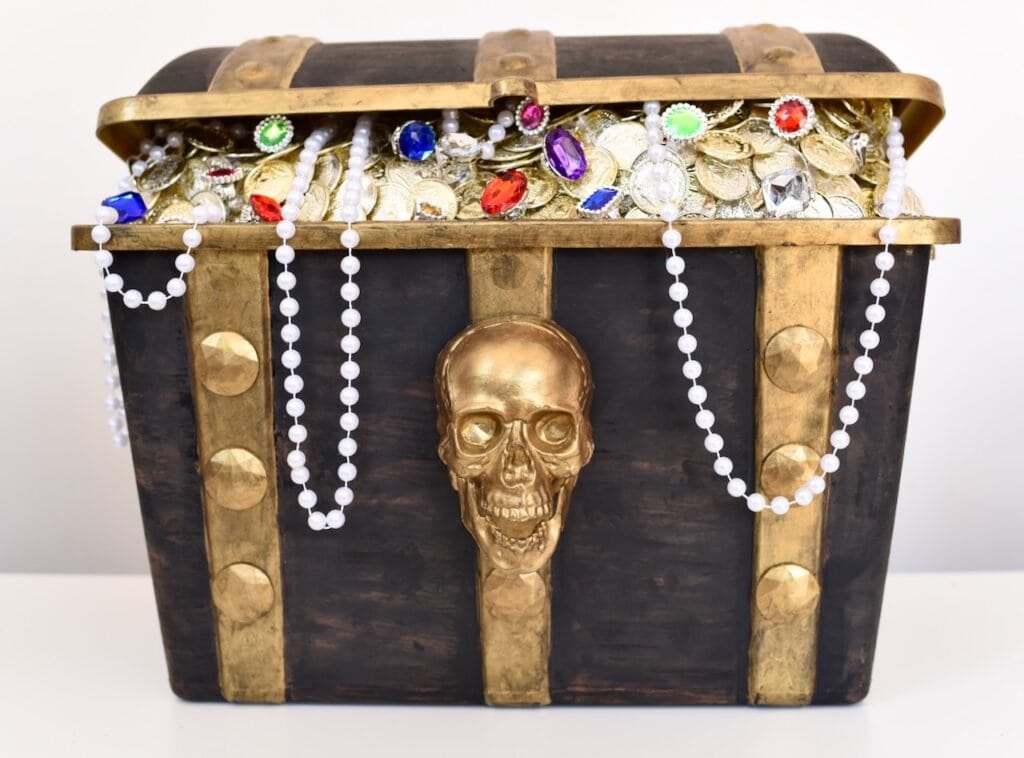 The lid on my DIY treasure chest didn’t have any hinges, so I just placed the lid on over the top at an angle. 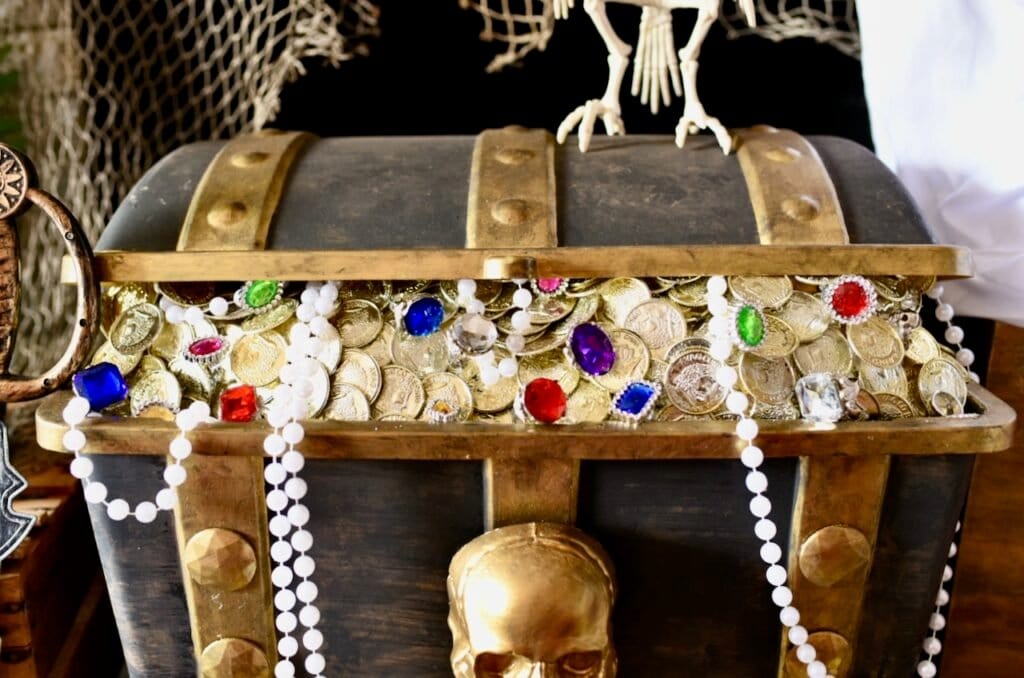 This made it look like the chest was open and all the loot was spilling out.

To really make my pirate treasure chest look real, I added some pirate accessories around the chest.

There are so many different options for this! 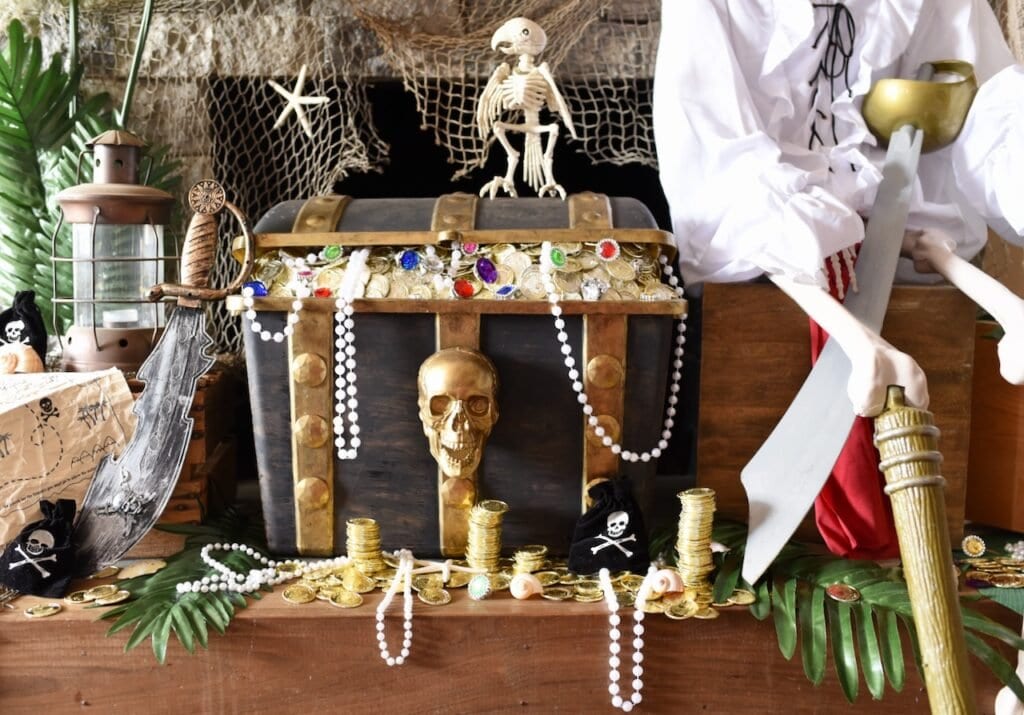 Here are some of my favorites that I’ve used.

Just press on a link below if you’d like to check any of these pirate props out!

How to Use Your Pirate Treasure Chest

There are so many different ways you can use your new diy treasure chest.

Don’t you love how the treasure chest looks on my Halloween mantel?

I just LOVE how it turned out. It’s definitely my favorite part of my shipwrecked pirate Halloween mantel!