Every September here in San Diego we start dreaming of cool crisp weather, the warm red and orange tones of the changing leaves, and all things apple and pumpkin.  While it still feels like summer here until mid-end October most years, there is a lovely little town tucked away in the mountains we escape to each year for Julian apple picking, drinking fresh apple cider, eating apple pie, and to get our “fall fix.” 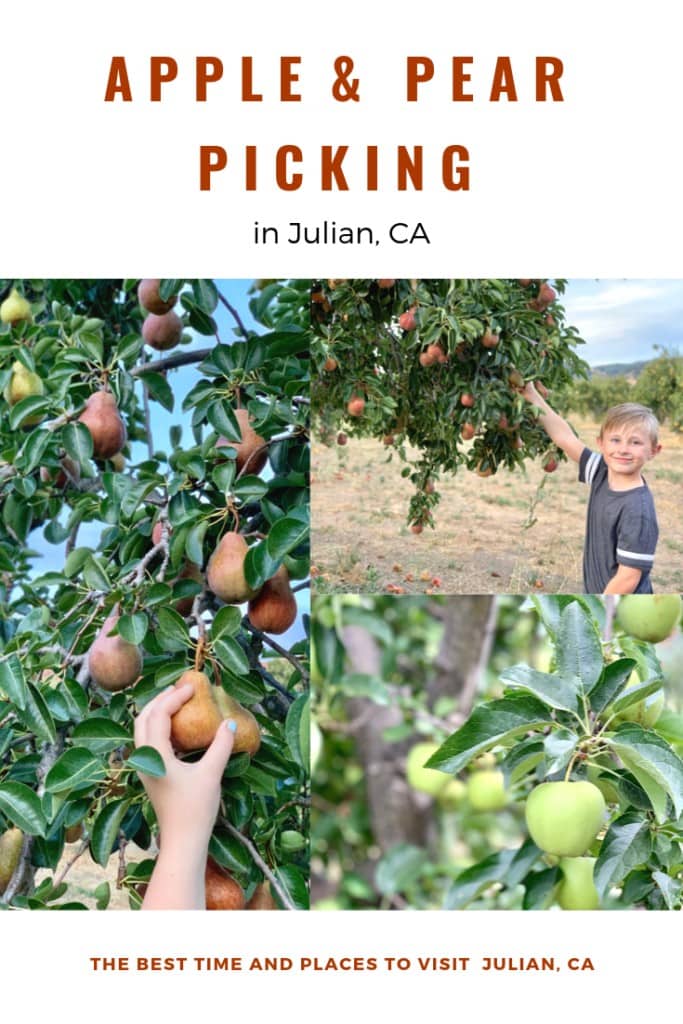 The small town of Julian, California is one of those rare places where time seems to stand still.  Every fall we make the hour drive to go Julian apple picking.  There are a handful of U-Pick apple farms, and we have tried most of them. 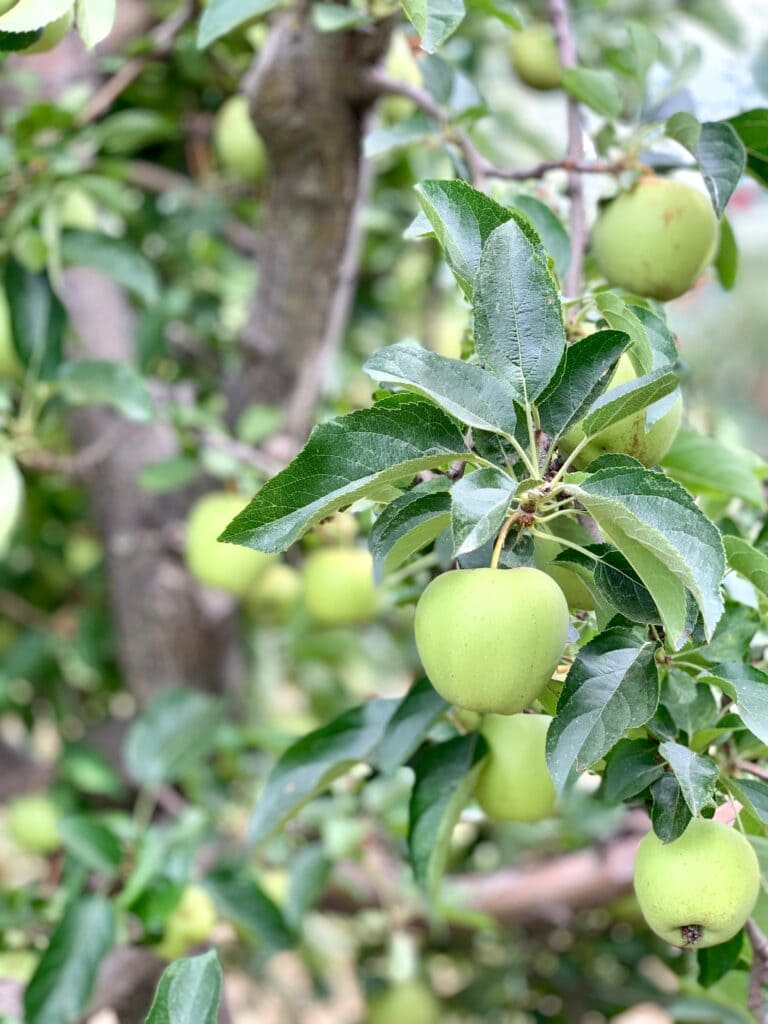 Our favorite, hands down, is Volcan Valley Apple Farm.  We started going there years ago after trying many other places.  What we love about Volcan are the delicious apples, the well-marked, clean tree rows with a nice variety of apples, and how well the whole apple farm is kept up. 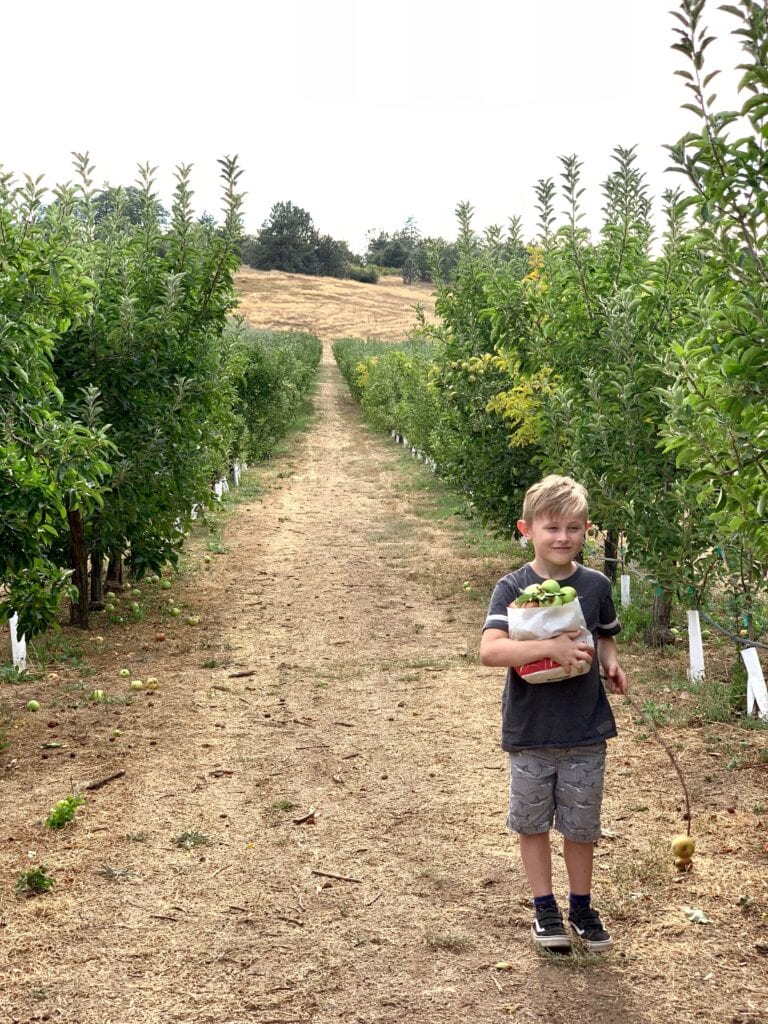 We usually purchase two bags so that I can have plenty of apples for the kids to snack on and a bag for me to cook with.

Homemade chunky applesauce, apple butter, and apple pie are my favorite ways to use this delicious fruit that we stock up on going Julian apple picking! 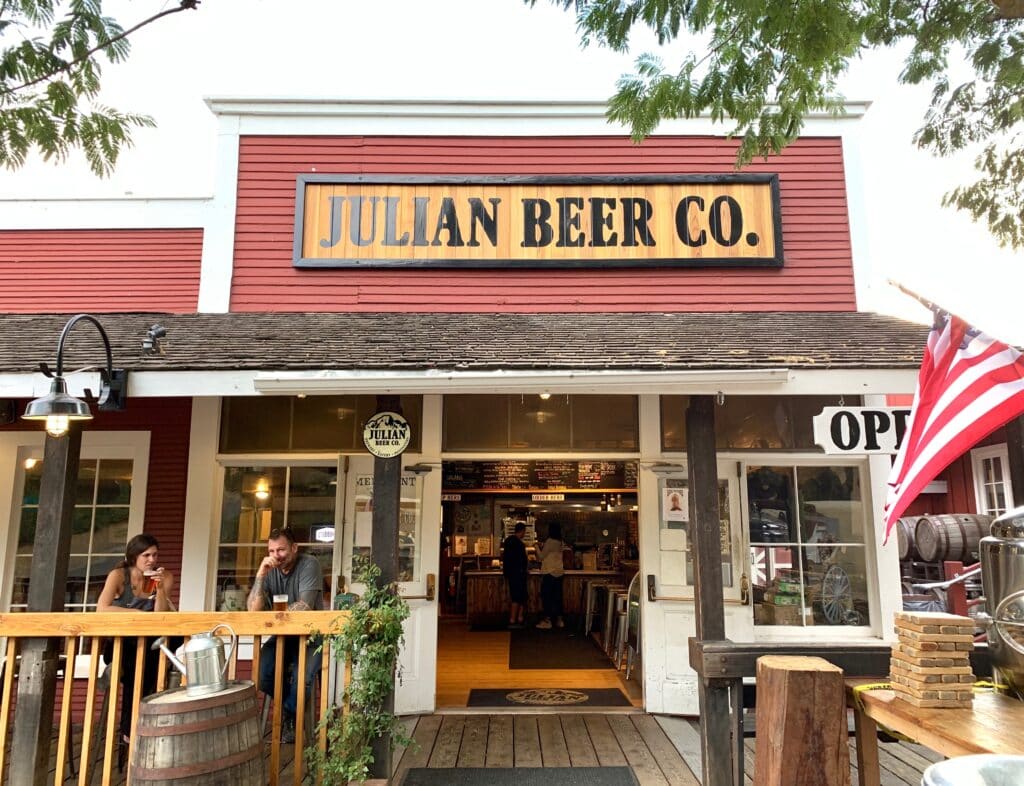 After apple picking this year we decided to try a brand new restaurant that we saw being built last year.  Julian CA is very small, so we were really excited to try the new barbecue place called Julian Beer Co.

Don’t let the name throw you off- it’s most definitely a barbecue restaurant that smokes amazing beef brisket, pulled pork, chicken, and more.  Everything we tried was absolutely delicious! 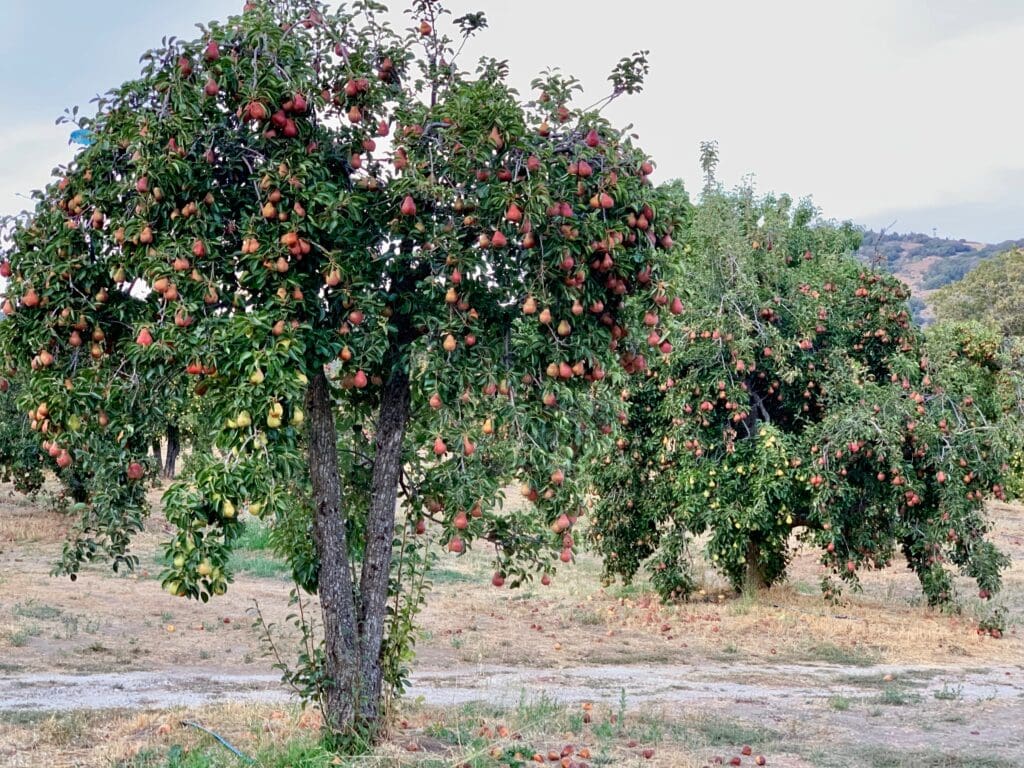 After our meal we thanked the owner for the delicious meal, and he graciously invited us up to his house and incredible orchards to pick pears.  He told us that his family were the new owners of a pear orchard and they had just opened up a U-pick pear orchard.  They had so many pears that were ready to be picked and they didn’t want them to go to waste.

Most people who venture up to Julian go apple picking, and don’t realize that there is also pear picking too. 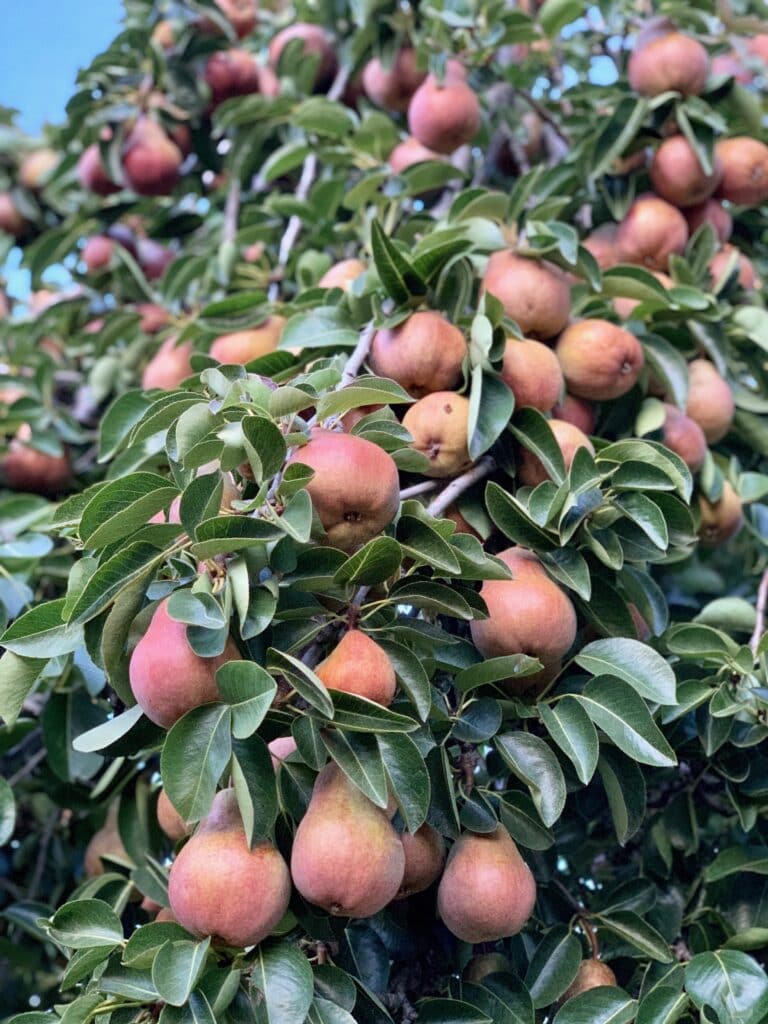 He didn’t have to ask us to pick pears twice!  We followed the directions and they let us into the expansive orchards.  Thousands and thousands of red and green Bartlett pears hung from the trees like jewels. 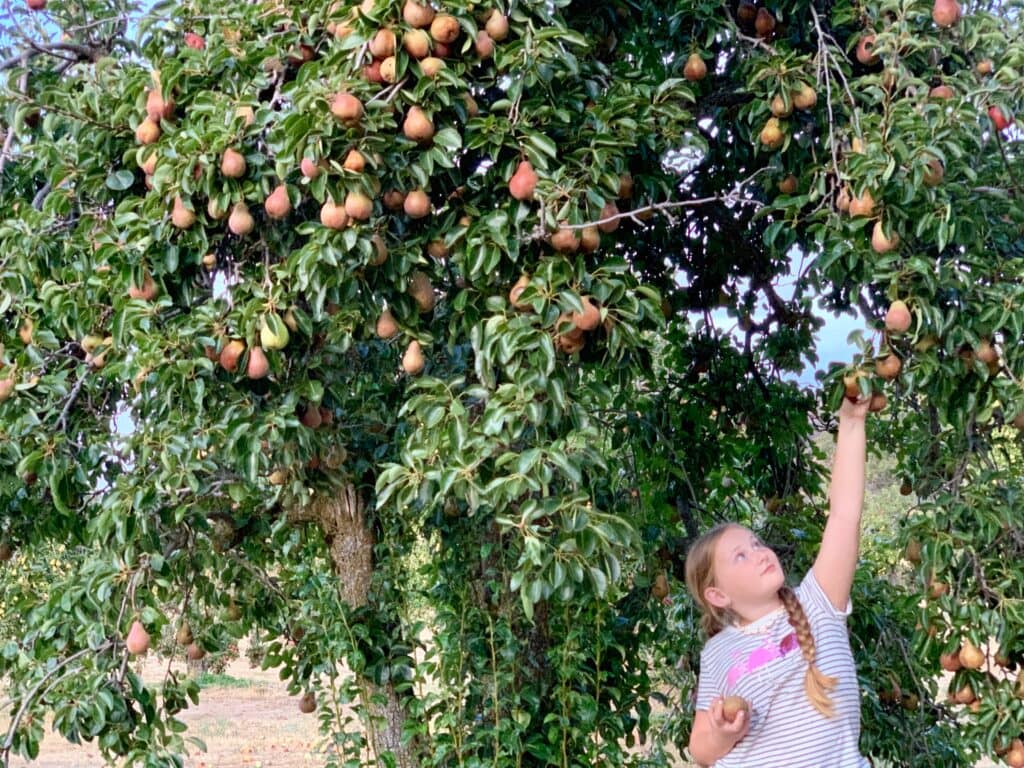 We were given instructions as to which area of the pear orchard had the most ripe pears, and we were off.  We learned how to tell if a pear was ready to be picked, and we tested each pretty pear before plucking it off the tree and adding it to our ever-growing large brown bags.

Currently bubbling gently over the stove are some of our pears, along with some fall spices and citrus juice and zest, to make a sweet pear butter that I plan to pour over practically everything this fall.  The smell here is intoxicating, similar to my fall stovetop potpourri that is a must make every autumn. 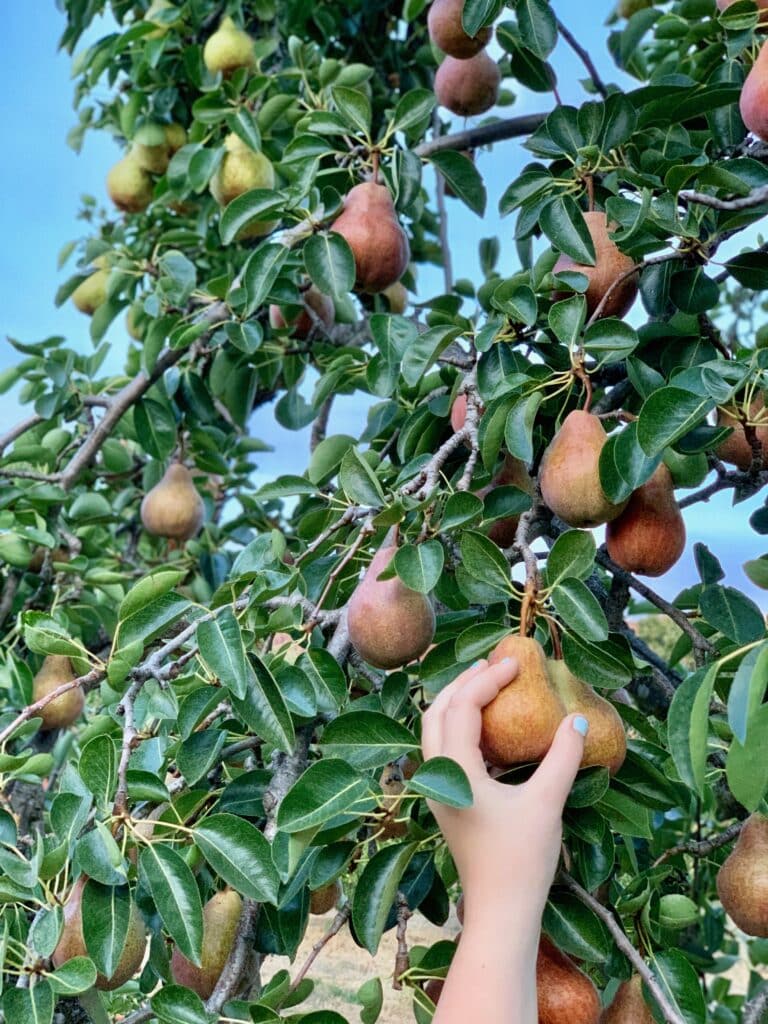 We picked and picked until our drooping bags couldn’t take any more weight from the plump, juicy pears.  Our cares about work, school, and everything else were completely gone after breathing in the fresh mountain air, spending time in nature, and picking apples and pears in one of our favorite little getaways spots for fall.

If you’d like to pick pears to, just stop on by the Julian Beer Co. and ask about the pear orchard, since they are both owned by the same family.  We were so impressed with their kindness and high quality food and trees.  We’re so excited to add these two new activities to our Julian fall ritual every year!

If you’re looking for even more things to do in Julian CA beyond the standard Julian apple picking, the Eagle Mine is another must see!  We love panning for gold and taking the tour through the cool mine tunnel, seeing all of the equipment they used back in the day to find gold, and hearing the stories of life back in the gold rush days.

Be sure to stay for sunset, or at least time your Julian departure so that you can see the sun going down.  It’s just stunning! 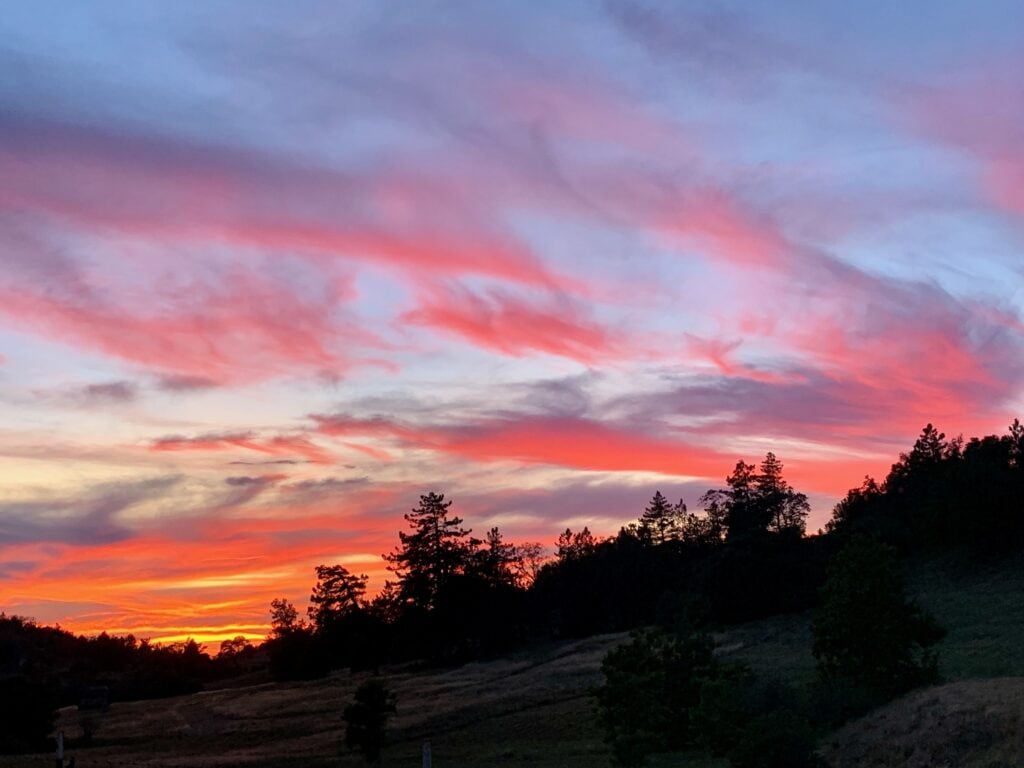 Best Time to Visit Julian for Apple and Pear Picking

If you want to go apple and pear picking in Julian, you’ll need to call the specific orchard youwant to visit and find out when they expect to open and close.  Every year is different, depending on the apple and pear crops.

The season usually begins at the end of August or early September and goes until the end of September or beginning of October.  The season is usually just about a month long, so definitely don’t wait too long into apple season to visit or you might be too late!

What are some of your favorite activities?  Make some new favorites with our free printable fall bucket list punch card.

It’s finally starting to cool down here and I’ve been wanting to bake all things fall.  Who else is loving fall this year?