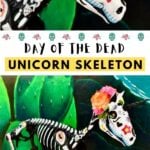 Make a colorful and unique Day of the Dead Animals Skeleton that can double as a Die de Los Muertos and a Halloween decoration this fall.

My two oldest kids have been in a Spanish Immersion program at school since Kindergarten. They are fluent in speaking, reading, and writing in Spanish, and we have learned so much about the Mexican culture over the years. 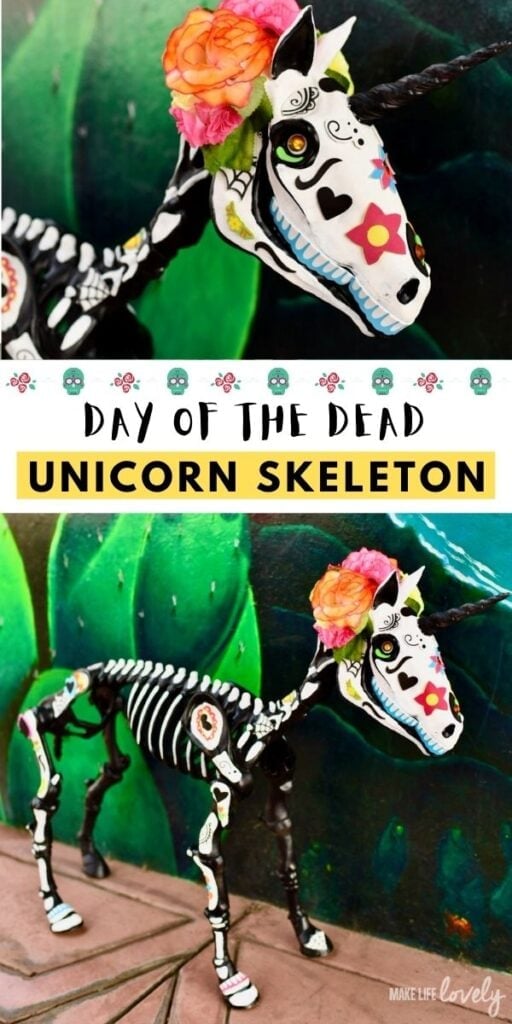 One of the Mexican traditions I just love is Dia de Los Muertos, or Day of the Dead. It’s a wonderful traditional holiday that celebrates both life and death.

It is believed that the spirits of children and adults can join their families for 24 hours. Living relatives leave food, flowers, and candles at their gravesites or on ofrendas.

DIY Day of the Dead Animals

I decided to get creative this year and decorate a unicorn skeleton that could double as a Halloween AND Day of the Dead decoration.

Oriental Trading Company sells a fabulous unicorn skeleton that I knew would be perfect painted black with white bones and colorful flowers and decorations.

I wanted it to look like a Day of the Dead skeleton, just in animal form. 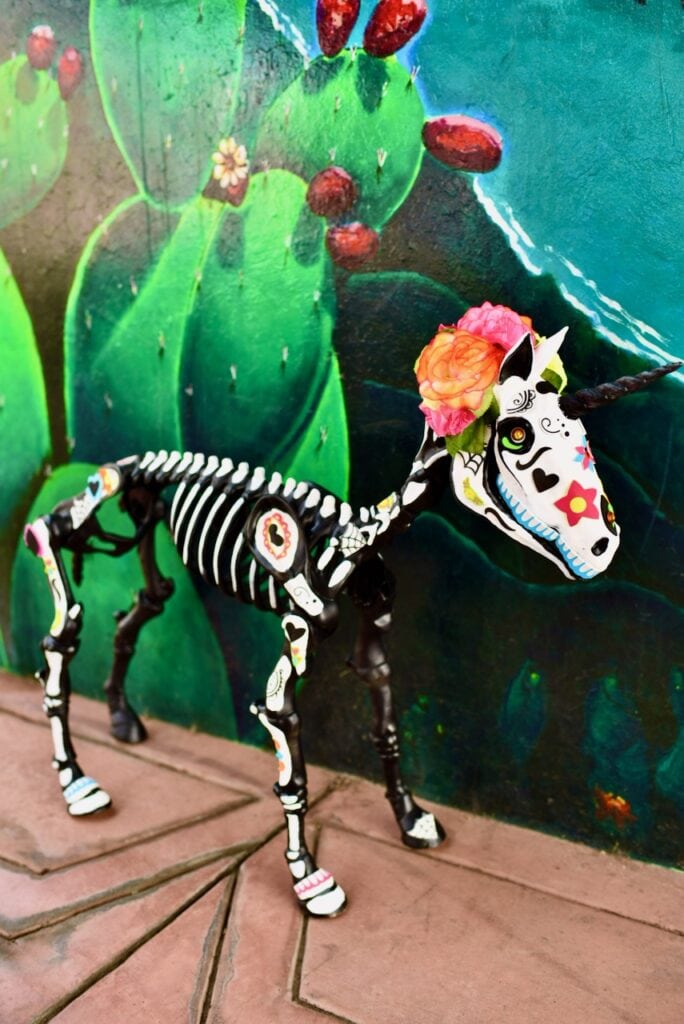 This post contains affiliate links, and if a purchase is made through them I make a small commission at no extra cost to you.

Day of the Dead Skeleton Supplies 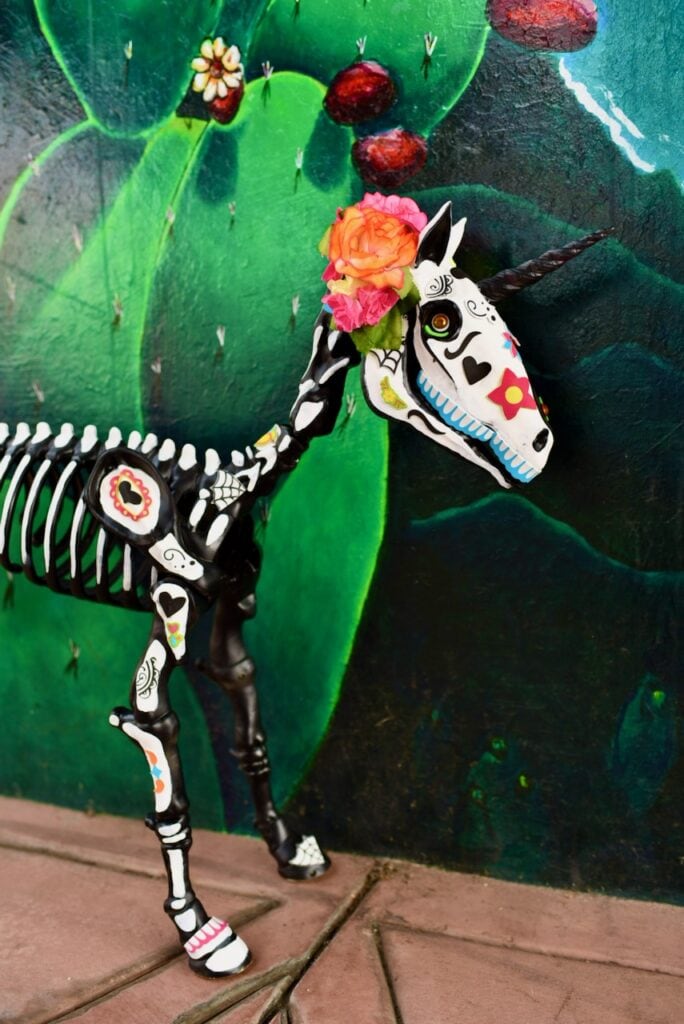 How to Make a Day of the Dead Animals Skeleton

Head outside and place your animal skeleton on cardboard or a surface you don’t care about getting paint on. 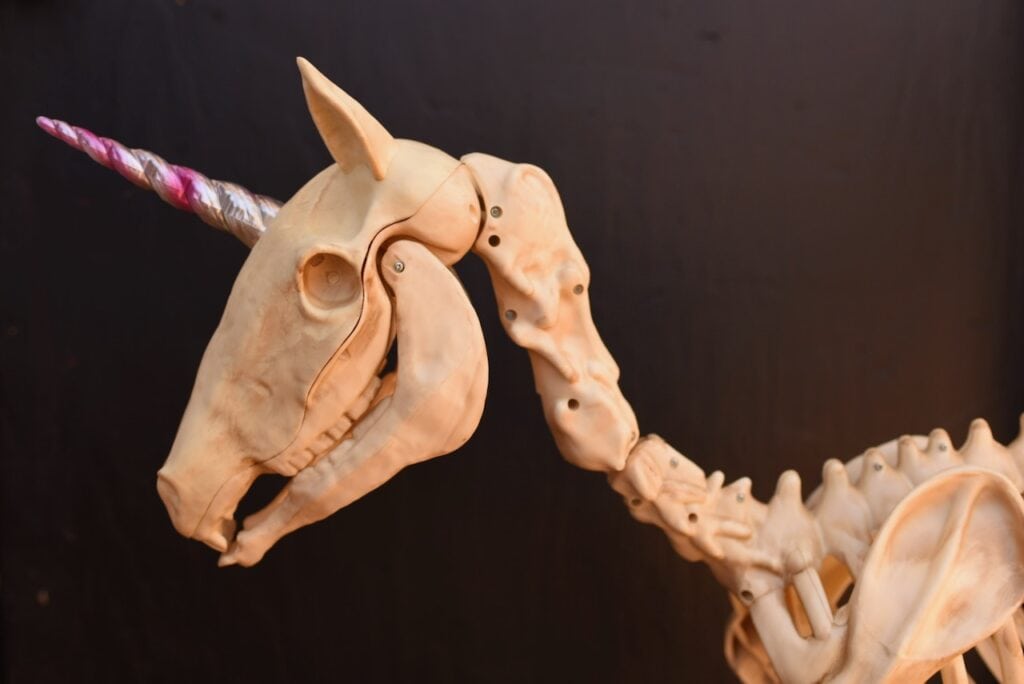 Spray multiple light coats of black spray paint until your animal is completely covered in black. Make sure to let each coat of paint dry completely before adding a new coat.

I used a white chalk marker to draw bones all over the skeleton. 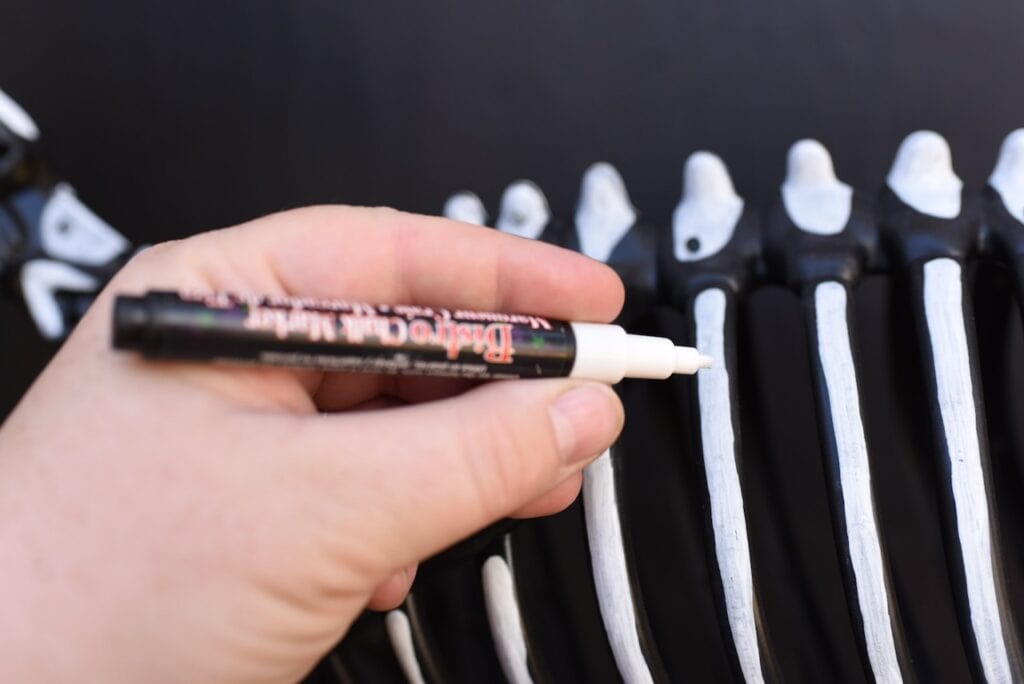 It’s easiest if you follow the bones that are already on the skeleton. 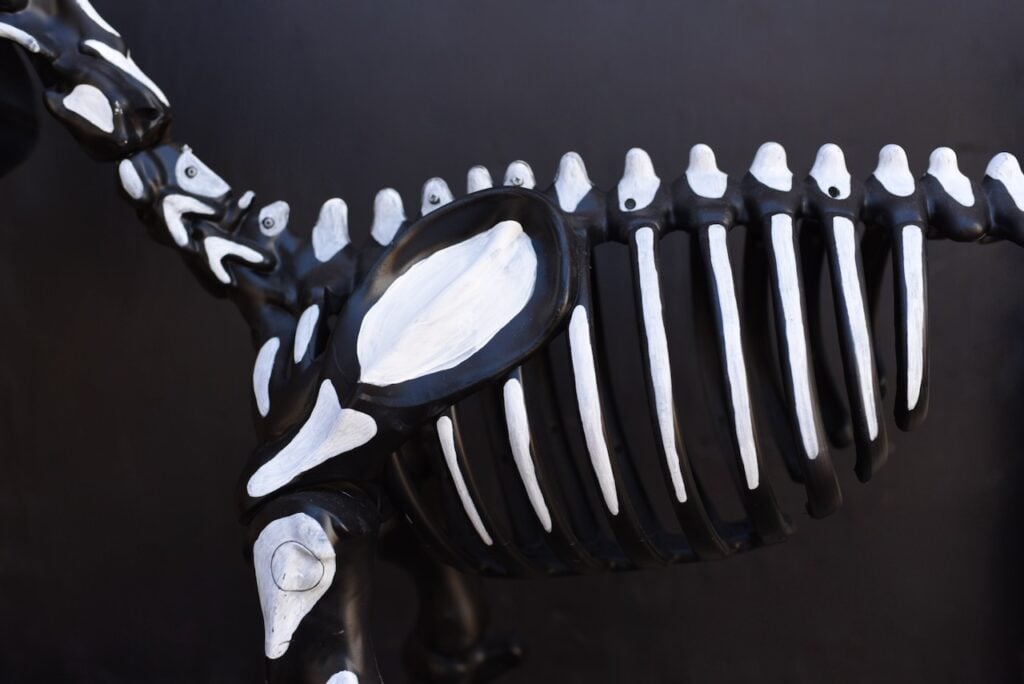 Just leave a black gap between each bone you draw on and fill it in as much as you can with the chalk marker.

Darken the bones with paint

At this point you might be questioning whether or not this is going to look good. Stick with it!

It’s easiest to create a bone “base” with the marker, but then to add more white to really make them stand out with white paint. 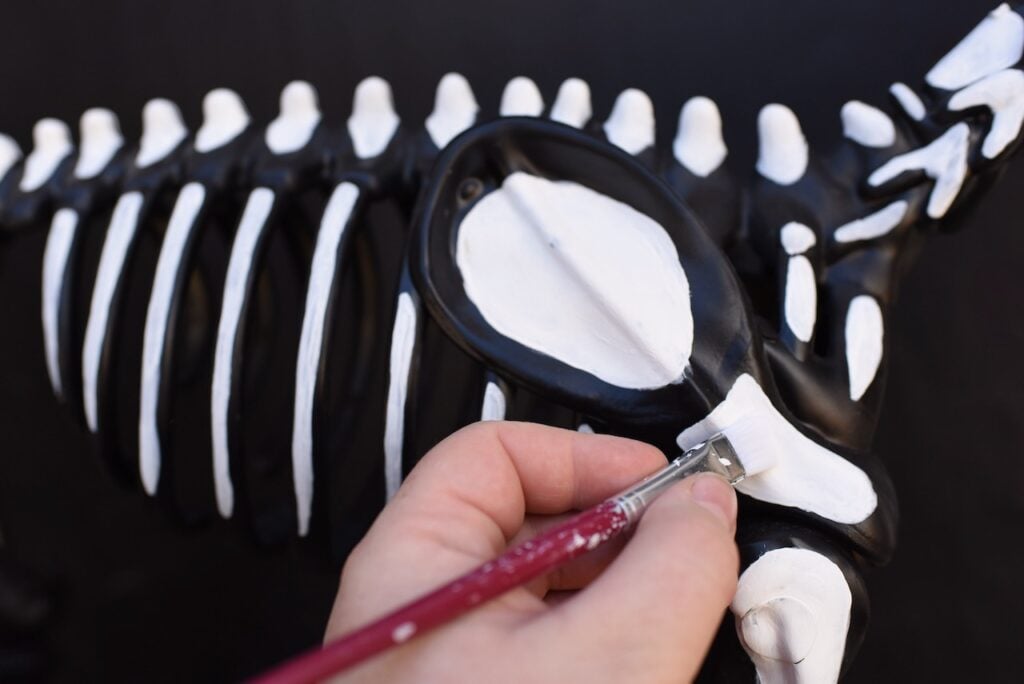 Use a paintbrush and some craft paint to paint over the bones so they look nice and crisp and really stand out. Let dry.

Now for the fun part… adding all the colorful details!

I originally planned on hand painting all the colorful decorative elements, like flowers, swirls, and dots. However, after I painted all the bones I realized that I could make the skeleton look amazing with less work by adding on bright Day of the Dead foam stickers. 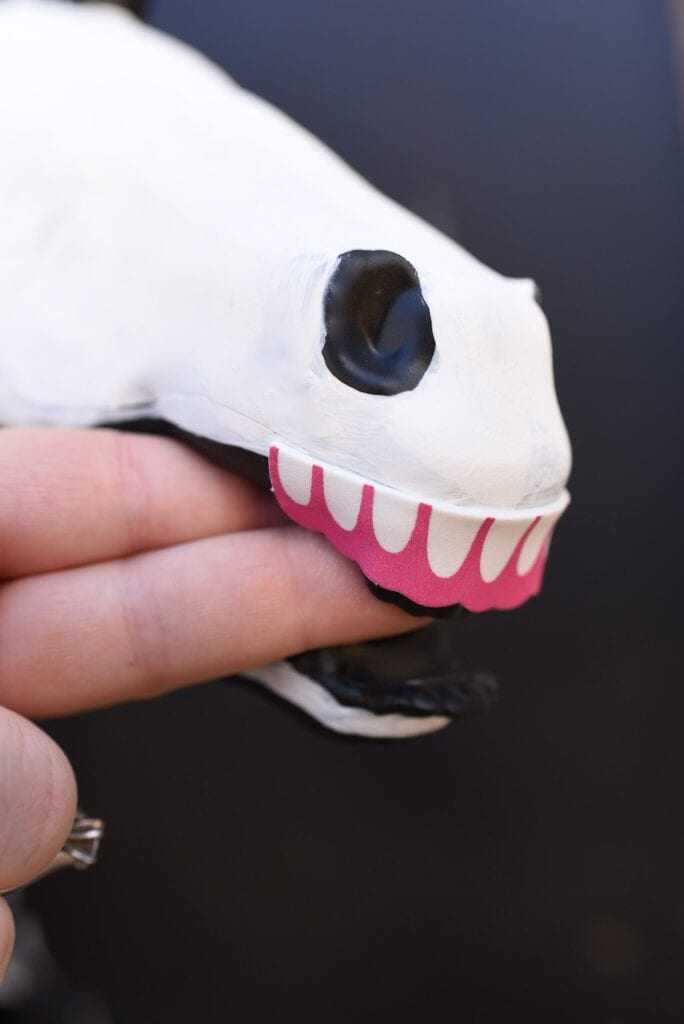 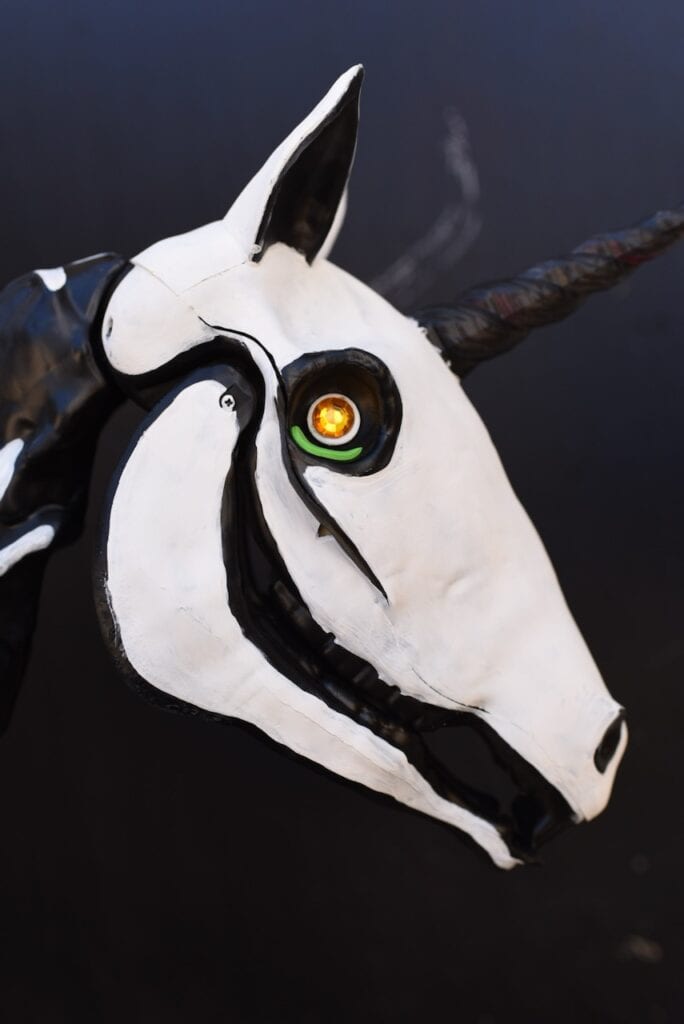 This pumpkin decorating set I bought came with lots of foam stickers that worked perfectly! In just a few minutes, I embellished my skeleton with lots of cool designs with little effort. 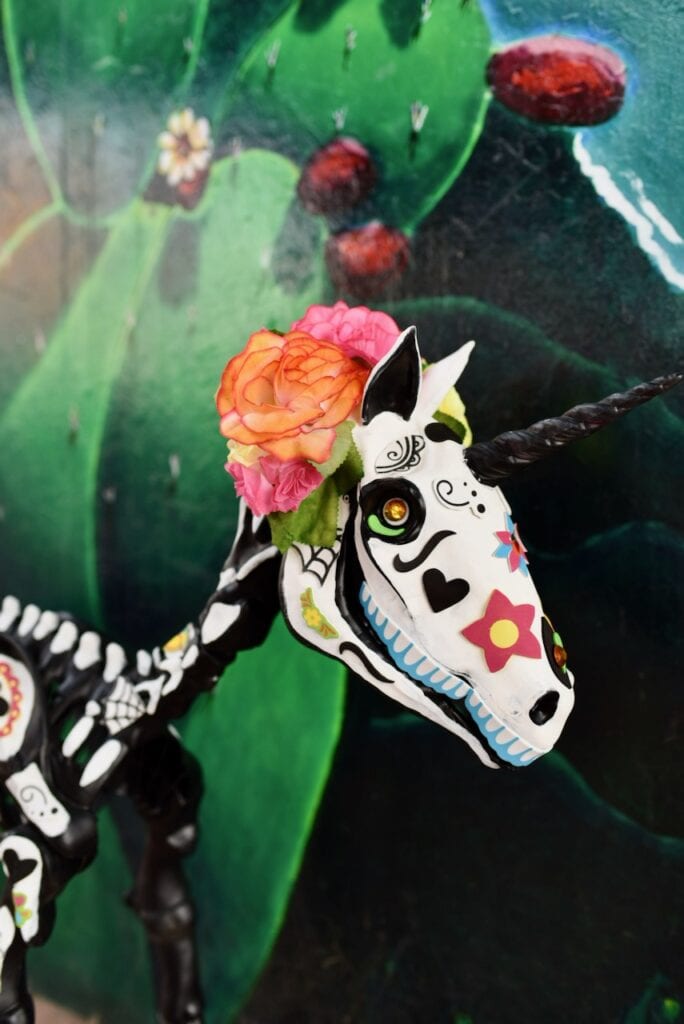 I found a bright colored floral headband from Oriental Trading Company that would work perfectly for this skeleton to give it an authentic look.

After snapping off the headband ends that weren’t covered, I used a hot glue gun to glue the flowers onto the unicorn skeleton’s head, just behind the ears.

We drove to Chicano Park in San Diego and photographed her in front of the colorful murals. 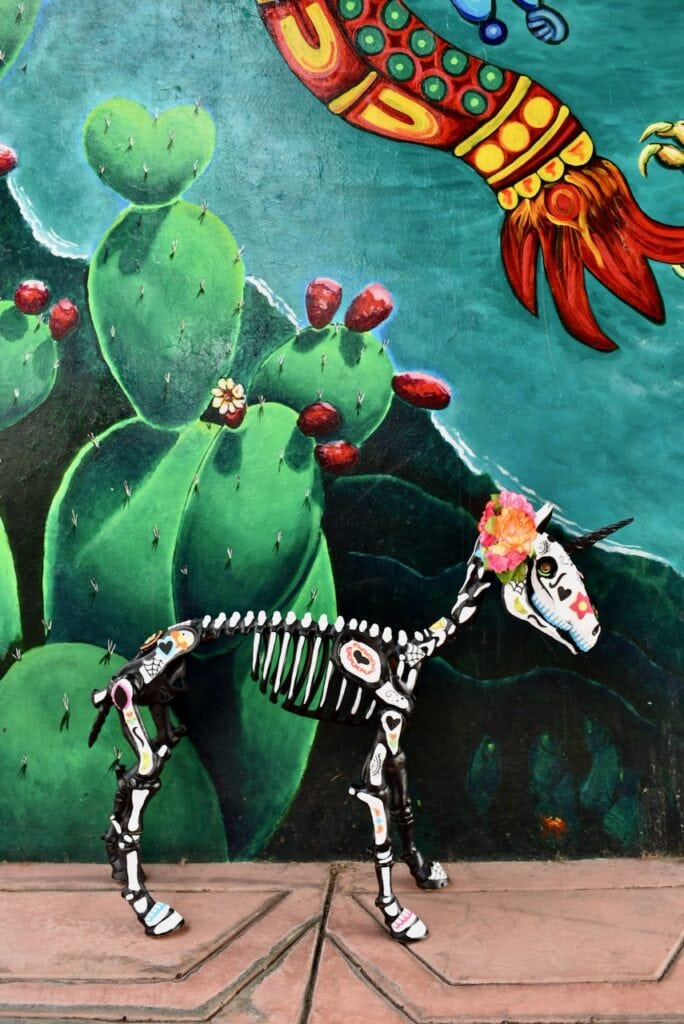 Isn’t she a beauty? Her decorative designs and bright bold colors make me so happy!

You could make Day of the Dead animals from any animal skeleton. You could even do this with a Halloween posable skeleton too!